From CONNECT Development Stalls: “Re: ONC. They have apparently decided to retain the CONNECT development contract with CGI. But since ONC is planning for Harris (the incumbent) to re-file its protest, no work will begin for another 3-4 months. The steam continues to escape from the CONNECT program. No word yet on who ONC has selected to replace the prior program leads, Dave Reilly and Vanessa Manchester.” Unverified.

From HITInsider: “Re: tough times in Verona? First, Epic clients complain about problems complying with Meaningful Use reporting requirements. Now I am hearing that during a recent Epic upgrade at Texas Health Resources, the system was down for THREE STRAIGHT DAYS. Recovery from this took an additional four days, with multiple subsystems failures during that time.” The THR problems weren’t related to Epic – it was a simultaneous Citrix upgrade that caused the problem. Epic was fine, according to CIO Ed Marx – users just couldn’t get to it (not that the distinction matters to users, but it probably does to Epic).

From JustWonderin’: “Re: Allscripts. Hearing it will outsource its TSC remote hospital operations. Not clear if it is just legacy Eclipsys or also legacy Allscripts.” Unverified.

From The PACS Designer: “Re: Verizon iPhone 4. InformationWeek provides us with some more aspects of the Verizon iPhone 4 due for release in early February. TPD likes the Wi-Fi mobile hotspot instance that this iPhone generates for five other devices.”

Thanks to Inga and Dr. Jayne for holding down the HIStalk fort during my short break. I am relaxed, sunburned, well romanced, and still picking Mojito mint from my teeth, all obvious markers that I needed and enjoyed some time off. I’m also way behind on e-mail, so I’ll hold the fascinating comments I received about Epic’s sales process until I have more time to assemble them. For those waiting on something from me, I apologize profusely – I’m in a constant state of overwhelmal (if that’s not a word, it should be, and my pipe-smoking doc’s picture should appear with the definition).

The HISsies voting is closed – thanks to the 988 readers who took part.

I’ve mentioned New Zealand vendor Emendo, which sells the CapPlan capacity planning software for hospitals. The company, whose sales went from $0 to $10 million in its first three years, expects $50 million in revenue in the next three years and will sign deals with additional US partner companies this year.

Karl Matuszweksi, MS PharmD joins First DataBank as VP of clinical and editorial knowledge base services. He was previously VP and editor-in-chief at competitor Gold Standard/Elsevier.

Weird News Andy has been busy, for sure. He entitles this find as “She must have been a valet girl.” A woman in labor pains drives herself to the hospital ED at 3:00 a.m., where a uniformed valet offers to park her car as she rushes inside. During her admission, she is given bad news: the hospital does not offer valet parking. The car was later recovered, but the grand theft auto suspect has not been. WNA also snorts at this report: cocaine-like designer drugs that are being sold in gas stations labeled as bath salts for $25 per half-gram bottle are causing suicides, poison hotline calls, and hospitalizations, especially in teenagers. Said a hospital’s ED chief, “They will do stuff that they wouldn’t ordinarily do, like dive from a third-story window into a pool.”

HIStalk’s newest Platinum Sponsor is interesting: IRM (Information Resource Management), part of the 34-hospital Inland Northwest Health Services of Spokane, WA. IRM is an informatics solutions service provider (consulting, implementation, management, and outsourcing, with emphasis on Meditech HCIS) and offers hospitals the services of its 300 IT experts, including the Meditech EMR, Bar-Coded Medication Verification Systems, centralized help desk, software development, and Web development via the shared service model, with an average satisfaction score of 4.89 on a five-point scale and a staff satisfaction score of 96%. For physicians, it developed an ASP model for hosting the GE Centricity PM/EMR, secure e-mail, document management, encounter forms, speech recognition, services for faxing and e-prescribing, and interfacing. I’ll make it a point to learn more since I’m interested in what they’re doing. Thanks to IRM and INHS for supporting HIStalk.

Former Cerner analyst Matt Wenzel is promoted from interim CEO to permanent CEO of Hedrick Medical Center (MO). He started with the hospital in 2006 as an IT analyst.

Apple announces amazing Q1 results Tuesday after the market close, with revenue of $26.7 billion, profit of $6 billion, and a staggering 7.3 million iPads ($4.4 billion  worth) sold in the quarter. Apple also moved 14.1 million Macs, 19.5 million iPods (mine being one – love it), and 16.2 million iPhones, even before they were available on Verizon.

East Alabama Medical Center says it will get about $9 million in HITECH money over the next four years, with the first payment expected this year. They’ve spent $78 million to move to electronic systems.

Old news that I might have missed: a network administrator at Pardee Hospital (NC) is charged with stealing $615K worth of Cisco equipment. The federal indictment says Joel Kimble filed false warranty claims, had the replacement items sent to his home address, then sold them on the gray market.

Australian HIT vendors had a terrible 2010 caused by delayed e-health projects, global financial woes, and an unfavorable currency exchange. Everybody knows about the hard fall of iSoft, but other companies with negative news are ISCGlobal (sold its claims processing assets for next to nothing), PHR developer Healthe Solutions Australia (went under in 2009), medical information publisher MIMS Australia (losing money, moving offshore), US-based Milliman Care Guidelines and First DataBank (closing down there, with FDB announcing losses), TrakHealth developer InterSystems Australia (borrowing money from parent InterSystems to cover losses), Global Health (reduced revenue), GE Healthcare IT Australia (reduced profit, was considered for shutdown), and Cerner (slim profits). This is an excellent article in AustralianIT.

KLAS announces a new report on clinical decision support, about which I’ll share all I know (which isn’t much: I don’t have the report). Hospitals say order sets deliver the biggest bang for the CDS buck, integration with third-party content doesn’t work very well, and Meaningful Use requirements are hurting CDS development (interesting since MU touts CDS, but apparently has slowed its progress). 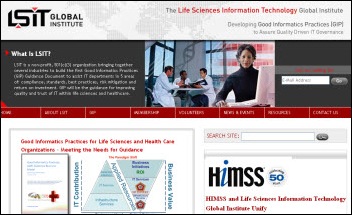 HIMSS and Life Sciences Information Technology Global Institute unify (meaning, I assume, that HIMSS bought the San Diego-based organization but didn’t want to sound crass in the announcement by actually saying so). LSIT is developing references and standards for the life sciences market. It sounds ITIL-like.

A survey in Japan finds that 10% of that country’s universities use cloud-based e-mail providers such as Google and Yahoo, raising concerns there that those companies don’t reveal where their servers are located, meaning they are likely outside of Japan and therefore not covered by Japanese law in case of privacy issues.

Rush University Medical Center (IL) anticipates earning $28 million in federal incentives for its Meaningful Use of its Epic EHR. It went live in 2009 and will have 90% of its office-based physicians up by the end of the year.

DrFirst announces the establishment of its Hospital Services Group that offers consulting services.

Michael Gold joins CareCloud as director of product development. He was previously with Sage Healthcare.

More than a few folks have sent me a note asking if they missed the registration link for HIStalkapalooza. To clarify, Mr. H will post all the registration details on the 21st. Meanwhile, I am pleased to report we have lined up celebrity judges for the second annual “Inga Loves My Shoes” contest and the first annual HIStalk King and HIStalk Queen coronation that will be among the festivities there. The latter will recognize the best-dressed attendees, so don’t forget to pack a tux or sparkly dress. Mr. H has agreed to honor winners with amazing prizes, so it just might be worth that extra $25 checked bag fee to bring your party attire.

Speaking of HIMSS events, I was looking through the conference information and a few items caught my eye:

In yesterday’s HIStalk Practice, I mentioned a bit of juicy testimony from the HIT Standards Committee meeting last week. A reader forwarded this link, with instructions to cue the recording to 2 hours and 49 minutes to hear what Dr. Scott Monteith had to say. It’s worth taking five minutes to hear why he’s not too impressed with the whole Meaningful Use issue.

Why is it necessary to have a physician at the C-level or vice president level of administration at an academic medical center for informatics? Do the majority of academic medical centers have such a position or are they using a physician champion? What is the reporting relationship between the CMO and CMIO? What are the main job duties of a CMIO?

First, let’s talk about the CMIO title. According to CMIO Magazine’s February 2010 issue (which happens to be lounging on my office credenza with the alumni magazines that I leave around because they have awesome cover art) less than two-thirds of us actually have the title. Some of us are Directors of Informatics, Medical Directors, or something else. Being a direct report to the CIO or CMO are each in the 30% range, with around 15% to the CEO.

In my opinion, what’s more important than the CMIO title is the CMIO role itself. And that can be filled by either a named CMIO or a physician champion with another title, as long as he (or she, even though that same article said that 93% of respondents were men) has a clearly defined role and enough time to get the job done.

Too many organizations try to do the CMIO role on the cheap and add it to a physician with an already full plate, who may or may not know anything about information systems, and may or may not have good peer relationships. The majority of academic medical centers, especially if they are going to be successful, are going to have the CMIO role, whether they call it that or something else. I know of many mid-size hospitals and large medical groups that have also embraced the CMIO.

So what does a CMIO do? (Warning: literature search in progress! You can take the girl out of the medical library, but give her a laptop and a glass of Cab and she’s right back in it.)

According to the September 2006 issue of the Journal of the American Medical Informatics Association, the CMIO leads clinical IT initiatives, engages in strategic planning, participates in vendor selection, manages clinical IT staff, and leads process redesign. I generally agree with those main job duties, but they left out the more glamorous parts of the job:

I hope this helps. It sounds like you’re on the way to some serious work – best of luck!

Have a question about medical informatics, electronic medical records, or that itchy rash that won’t go away? E-mail Dr. Jayne.