From Staff Infection: “Re: HealthPort. I overheard that the Germany-based CompuGROUP is looking to expand beyond its Noteworthy acquisition. They want to have 30,000 US physician customers by the end of 2010 and have been peeking inside the kimono of HealthPort. Not a pretty sight, but I bet the brain trust at the Thurston Group (manages HealthPort) would unload it on the cheap. Reminds me of the old Steve Martin line of how to make a million dollars and not pay taxes — spend $30M on Companion Technologies and drive it into the ground and sell it for $1M.”

From Misys_Ex: “Re: from the QuadraMed user group. Michael Simpson, SVP of product strategy, has resigned after six months on the job.” Unverified.

From Alanya: “Re: your Las Vegas rant. That’s why I LOVE reading your blog. You make me laugh out loud on a Monday morning. It’s nice to get your perspective for those of us who are office-bound. Keep it up!” Thanks, sweetie. You may regret encouraging me.

From Irene O. Tican: “Re: McKesson. Lee Fowinkle, VP of engineering at McKesson Ambulatory, has left. He was leading the single database project and his departure will have a significant impact on MCK’s ability to deliver an ambulatory MU product.” Verified, at least the part about his MCK departure. I’m cackling to myself at the fake name I made up for this reader’s post, by the way (oncologists will get it).

From The PACS Designer: “Re: Google Wave. TPD has posted about the collaborative aspects the Google Wave platform. Google has announced that it’s ending all development on Google Wave. Some EHR experimenters are unhappy with this news, as they wanted to incorporate the Continuity of Care Record (CCR) and the Continuity of Care Document (CCD) using Google Wave to provide a complete record of a patient’s treatment history across institutions.” I can’t say I’m too surprised at this rare Google misstep. I got an early invitation to Wave, watched the endlessly long video that tried to explain it, tried it for a few minutes, and walked away for good because I couldn’t see the point. If you can’t explain it in less than an hour of edited video, nobody’s going to bite.

From Cassie: “Re: Mercer. Mercer has apparently lost another piece of IT equipment and thus lost employee data for City of Boise employees. I doubt Mercer is going to be signing deals in the State of Idaho anytime soon.”

From Amy: “Re: Aprima Medical Software User Group in Dallas. This is one of the best events I have attended. I am very happy with the path Aprima is taking. This is not an advertisement, but a shout-out for a job well done. An industry colleague turned me on to HIStalk – love it!” President/CEO Michael Nissenbaum invited me to attend the next one after reading my ACE recap. I interviewed him two years ago when the company was called iMedica and had recently licensed its product to Misys (now Allscripts) to sell under the MyWay name. He’s a pretty funny guy.

From Joe: “Re: pagers. Although it would seem this technology should have disappeared, some facilities do not have call penetration. They are also cheaper for workers who just need to receive brief messages.”

Watching: Pushing Daisies, an outstanding and highly awarded comedy-drama with some surprisingly effective poignant and romantic moments (I might have sniffled a couple of times — I’m sentimental). The narration and art direction is outstanding, as is the snappy dialog, the acting, the music, and the always endearing Kristin Chenoweth (instantly recognizable as Bebe’s chirpy assistant Portia from Frasier) and Swoosie Kurtz. Like most shows that require a reasonably cognitive audience, this one died fast, but has arisen from the dead (no pun intended) on Netflix. My highest recommendation.

Kern Medical Center (CA) recovers from a malware attack that took down most of its systems.

The Center for Biomedical Informatics at The Children’s Hospital of Philadelphia creates a free iPhone app that classifies adverse events in clinical trials.

My last post asking for keynote speaker suggestions generate several comments at the end of the article. Check it out.

MedNetworks raises $5 million in Series A funding. Its technology, licensed from Harvard, maps the social networks of doctors to empower its clients to “leverage existing data to disseminate information and focus interventions,” which suggests equal potential for good and evil.

Weird News Andy notes “a Hefty piece of lifesaving equipment” as a paramedic fashions a makeshift incubator from a trash bag and towels to save a preemie weighing less than two pounds.

This is exciting: Microsoft will start a beta of Visual Studio LightSwitch this month. It’s an business application builder (desktop and cloud) for non-programmers that can tie into information from SQL Server, SharePoint, and other data sources. I’m all over it once it’s up.

I was annoyed by the sluggish performance and uncomfortable bulk of my ancient laptop at ACE, so I bought an HP Pavilion DM3-2010us when I got home. I love the 13.3” display, 4.2 pound weight, long battery life, a fast boot option to get to the Web, and built-in webcam and N-capable wireless. It’s like a super-powered, stylish, reasonably sized Netbook. $499.95 at Office Depot after rebate. I didn’t realize how much I hated Windows Vista until I got this one with Windows 7, which is excellent. Now I don’t have to be jealous of those Mac users and their 13.3” lightweights. All it doesn’t have is a DVD drive: $37 for a USB-powered external at Newegg. I’ll be getting some looks at Panera, I hope.

HIMSS VP Pat Wise does a Q&A on What Meaningful Use Means to Nurses.

Actuaries estimate that medical errors cause the US economy almost $20 billion per year.

Speaking of actuaries, even the Medicare Chief Actuary says CMS’s optimistic estimates of Medicare cutbacks are a load of crap, at least unless voters are OK with providers going broke and refusing them service.

SaaS productivity application vendor Zoho and NetSuite form MedicalMine, a consumer tool for managing children with autism. Phase II involves a physician version and an EMR. Zoho has cool, easy-to-use apps, so this could be interesting.

Vangent will pay $65 million to acquire 450-employee Buccaneer Computer Systems, which provides healthcare IT services to the government. I found this interesting: Buccaneer, which previously processed Cash for Clunkers vouchers, wants to ride the wave of federal HIT spending, which is what caught Vangent’s interest.

One of the cooler things I’ve seen on a company’s home page: check out Kronos and the cute Australian who strolls out chatting from behind the application screen shot.

Oracle’s Larry Ellison criticizes HP’s board members for forcing CEO Mark Hurd to quit despite finding that he did not violate the company’s sexual harassment policy. “The HP board just made the worst personnel decision since the idiots on the Apple board fired Steve Jobs many years ago.”

I’m a bit behind in my e-mails, interviews, etc. as I get reacquainted with Mrs. HIStalk after my little Lost Wages junket, so bear with me. I have 15,000 sent e-mails in Yahoo Mail, if that gives you an idea of the volume of interaction I have with readers, sponsors, etc. Happily, I might add, so don’t let that stop you from giving me a holler.

The CEO of Cooper University Hospital (NJ) reports the facility is now live on Epic’s physician documentation with 100% CPOE usage.

In the first half of the year, MEDSEEK increased its total gross sales bookings 40% over the same period last year. YTD revenue grew 18%.

Merge Healthcare reports a $30.9 million Q2 loss, in part due to costs associated with its Amicas acquisition. Total sales, which include figures from Amicas, grew 89% to $29 million.

Over on HIStalk Practice, Dr. Gregg Alexander comments on the industry’s newest bedfellows: insurance companies and EMR companies. Dr. Alexander calls it a move, “that would surprise most of us about as much as hearing that Coke and Diet Coke are actually made by the same company.”

At St. Mary Medical Center (CA), four staff members are fired and three disciplined for posting photos of a dying patient onto Facebook. The patient had multiple stab wounds and was nearly decapitated from a throat slashing. If you like blood and guts, I guess that might be pretty thrilling stuff and actually get you a few thumbs up. But seriously, how can people be so stupid?

I forgot to mention last week that I finally got my new iPhone4. I hate the reception, which is not nearly as good as what I had on the 3G, and definitely not as good as a regular old cell phone. I’m looking for suggestions on bumpers or cases. I had the Otter before and I liked it because it was quite heavy duty and was survived being thrown between my purse and the console of my car. Now I’m open to anything that might enhance reception, if that is possible.

NextGen is awarded two-year accreditation as a provider of continuing medical education for physicians by the Accreditation Council for Continuing Medical Education.

Here’s a story that I am sure warms Dr. Deborah Peel’s heart. A US appeals court upholds the constitutionality of a Maine law that allows doctors to withhold their individual prescription-writing information from data mining companies.

Wellpoint plans to align its P4P incentives with Meaningful Use criteria and implement a financing program to support HIT in rural and underserved communities. 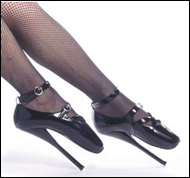 From Weird News Andy, here are details on study by an Iowa State University student who obviously does not understand fashion. For her thesis, the student looked at the whether or not wearing high heels increased the risk of developing osteoarthritis. Big surprise here: the higher the heel, the greater the risk of joint degeneration and knee osteoarthritis. And (duh) heel heights change walking characteristics (slower speeds and shorter  strides). Any woman who has sacrificed her feet for fashion for any length of time could have saved this researcher lots of time and money and told her the same thing. Heels are about looking hot, not being sensible.