From SnagMonkey: “Re: confirmation of Providence Oregon’s transition to Epic.” He (or she) sent over the July 19 internal announcement. GE Flowcast, GE Centricity, McKesson Horizon Clinicals, McKesson Star, and pretty much all the unnamed ancillary systems will be shown the door. Implementation starts in January, the first go-live will be in 2012, and the project will be finished 30 months after it starts. Thanks for the scoop.

From Girls Just Wanna Have Fun: “Re: acquisitions. Hold on to your hat the next six weeks. Lots about to start shaking loose. Can’t say more, but August and early September will be the most active HIT M&A announcement months in a very long time.”

From TooLate: “Re: iSoft. Massive cuts continue and positions will be eliminated. Major shifts, consolidation of leadership, off-site London meetings are more frequent, and more stock will be issued. Sound like everything is being done right except fixing the actual problems — product and leadership. Can’t wait to see this annual report.” Shares are at less than 14 cents US.

From ThinGreenLine: “Re: management changes at Meditech. It was previously announced that Steve Koretz would assume all installation and support responsibility for 6.0 product line. Now Joanne Wood will assume same for all Magic and Client/Server products. Joanne being promoted to Senior VP. Two new VPs promoted under her, Leah Farina and Helen Waters. Leah has her roots in the HCA group, while Helen came from sales. This is the change Howard Messing hinted at in his interview with you.” Verified by Howard. That’s Joanne above.

From MaxPayneUK: “Re: Apira. Closes operations and gives all employees to IntelleHealth, which insists that new employment contracts be signed. Not sure how that happened without violating labour laws, but there you go.”

From Jenny Penny: “Re: Jay Deady. Cheers Across Atlanta may be thrilled that he’s leaving Eclipsys, but as much as an ass as he can be, I challenge anyone who has ever worked for him to debate that he challenged them to do their best. He is super duper intense about work – certainly no dumb slacker like many HIT sales guys.” Ouch!

From Buck S. Pearl: “Re: West Virginia Health Information Network. Five vendors still in the running to run the state’s HIE: Thomson Reuters, CSC, Deloitte, Medicity, and HealthBridge. The selection deadline was June 30, but they are re-evaluating functionality (which probably means they don’t have enough money to buy what they want). They are also negotiating with NaviMed and Quadax for a separate claims and eligibility portal, with one or both offering it to the state at no cost to open up the chance to sell other services to providers (clever buggers).” Board meeting minutes are here (warning: PDF). I knew Thomson Reuters jumped into the HIE game in December, but it still seems odd to see their name among those others.

From Laboratorian: “Re: Epic’s Beaker laboratory information system. Anyone know much about it? Are its big new clients implementing it?” Beats me. Anyone know?

From Jimmy DeLorean: “Re: posting the Monday Morning Update on Sunday. It’s always great feeling like I’m getting Monday’s news a day or two early.  ;)  But, you certainly have earned more than a few Saturdays off, and I’m sure Mrs. H appreciated having your undivided attention for the weekend. How you’ve managed to hold down two full-time+ jobs all this time and still have a personal life (and sleep) is a remarkable feat, though. Someday you’ll have to write a book on time management and life balance, even if pseudonymously.” Thanks – that made my day. I like having a few readers who get antsy when I don’t post until Sunday afternoon since it makes me feel needed. Mrs. HIStalk did indeed appreciate my attentions (and vice versa). 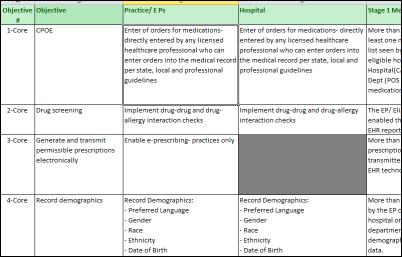 From Loyal Reader Kathy: “Re: Meaningful Use. Since you put together such a great spreadsheet over New Year’s, I thought someone ought to do it for you for the final and give you a little time for Mrs. HIStalk.” Kathy did a great job putting together the final rule information, including both the requirements and the quality measures (download it as Excel since it won’t look right otherwise — it has two tabs). Very cool, thanks! UPDATE: Scribd has some Facebook auto-login crap that isn’t obvious, so if you’re not on Facebook, download from here or here instead.

Listening: new from Asia, back with the original members (Palmer, Howe, Downes, and Wetton). I’ve got tickets to see them live soon. 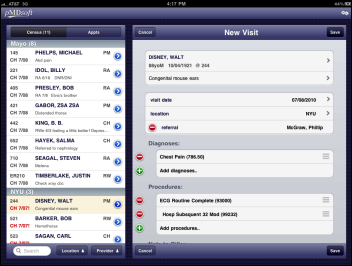 Weird News Andy goes non-weird in finding this: Americans are consuming fewer healthcare services, according to financial results of publicly traded healthcare-related companies. Evidence: fewer elective procedures performed, increased numbers of high-deductible insurance plans, fewer new prescriptions for maintenance drugs, and (of course) increased insurance company profits. Athenahealth was quoted for its observation that the number of claims per physician and the average value per visit dropped over last year. The WSJ article seems optimistic that consumers are getting smarter, but I’d bet they’re just holding off until they get those shiny new insurance cards courtesy of healthcare reform.

St. Vincent’s HealthCare (FL) signs a deal with CVS Caremark’s MinuteClinic to provide medical staffing and to work together on disease management. The organizations are integrating their respective EMRs to share histories and visit summaries. 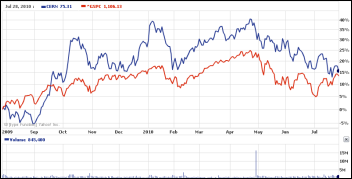 Cerner’s Q2 numbers: revenue up 13%, EPS $0.65 vs. $0.52, guidance raised. Shares jumped a little (one-year CERN against the Nasdaq above, with Cerner in blue). I’ll repeat what I said earlier this week: it’s one thing for Epic to take some business away from Cerner, but Neal’s always going to book great numbers, keep shareholders happy, and let everyone who wants to ride the Ferris wheel with him do so by purchasing shares. Millennium may have fierce competitors, but the company is doing just fine.

Speaking of Cerner, the earnings call transcript is here. It’s mostly the usual hack phrases used by executives and analysts (traction, footprints, give some color around), but there were a few interesting points. They’ll open a Vision Center in Europe. They don’t sound like they’re doing too well (my read, anyway) in the small hospital and physician practice markets. They expect 75% of their clients to earn full HITECH payouts. They’re going after revenue cycle services with RevWorks. One analyst asked directly about Cerner repeatedly losing against Epic in academic medical center sales, which COO Mike Valentine deflected by bragging on CERN’s success with for-profit hospital chains because of Cerner’s predictability and ability to scale (he also referenced HIStalk indirectly, saying “So we added 15 new footprints this quarter. In more than half of those we competed against the firm that you mentioned that gets mentioned a lot on the HIT blogs, and that’s good. We’re like the strong silent type. We’re going to continue to compete with them.” I snorted Diet Pepsi with Lime out my nose when I read the part about the “strong silent type” given Cerner’s notorious (over) marketing machine (i.e, the Vision Center), but that probably resonated with the stock guys as being humble. Neal dropped by for his usual one quick comment at the end, obliquely mentioning the acquisition of Picis by Ingenix (United HealthCare) and implying that they see opportunity in the platform that digitization enables.

CPSI’s Q2 numbers: revenue up 22%, EPS $0.39 vs. $0.32, beating consensus estimates of $0.36 and providing in-line guidance. In the 8-K, they mention that fired former CFO Darrell West not only charged $55,000 to a company credit card to pay his taxes, he cashed in almost 5 million membership reward points for personal benefit. 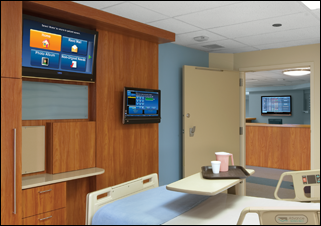 IBM will sell and implement the “smart room” developed by UPMC, which involves staff-worn ultrasound tags that trigger the display of role-based clinical information on the monitor when they enter the patient’s room. 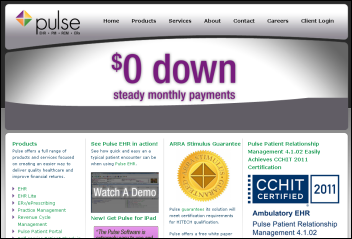 Paris-based Cegedim acquires Pulse Systems, vendor of the CCHIT 2011-certified Pulse Patient Relationship Management ambulatory EHR, along with solutions for e-prescribing, practice management, revenue cycle management, and patient self-service. Cegedim sells life sciences technology and is a pretty big deal with 8,600 employees and annual revenue of $1.2 billion (a little smaller than Cerner). They make it clear in the announcement that their interest is ARRA money. It also says that Pulse is profitable on annual revenue of $16 million, that Cegedim will pump another $13.5 million into the company, and that the value of the acquisition won’t exceed $58 million.

The former chair of the British Medical Association’s IT group urges doctors not to upload patient records to the Summary Care Record, saying it’s unsafe and should require patients to opt in instead of opt out. He’s setting up his EMR to prevent uploading unless patient consent has been checked off and is telling his peers to contact their EMR vendors to make the same arrangements.

This interesting article describes the advanced status of EMRs in Finland (91.1% penetration and a national health network), but calls out the pitfalls: it’s still hard for individual systems to communicate with each other, each local jurisdiction has different privacy rules, and the only way to transfer information when a patient moves to an area that uses a different EMR is to print everything out. I may need a site visit to Helsinki since I’ve not been for a few years and I like it there.

Free EMR vendor PracticeFusion launches its Research Division, which will publish lists of top-prescribed meds by specialty (which was in the announcement) and sell de-identified patient data (not announced, but that’s been the company’s stated plan, along with advertising to doctors, from the beginning — how else can they give away an EMR?) Some of their arguments on the Research Division page for providing patient data are a bit lame: (a) it’s a public health service; (b) it’s a research service; (c) Kaiser and the VA do it, so why shouldn’t we? (d) and lamest of all, under the category of Social Responsibility, “To keep this information from medical researchers would be a disservice to the safety and advancement of medicine in this country.” If you’re going to sell patient data, just say so — don’t try to make it sound noble.

Guess who’s an HIT demo dolly? Todd Park gets the thrill of having the leader of the free world pitch the site he built. Pretty cool. The President isn’t a Mac man, apparently.

Mediware renews its agreement with William Blair, which includes exploring “a variety of strategic alternatives to enhance shareholder value.”

Odd lawsuit: a former nurse manager sues Halifax Health (FL) for discrimination after a failed romance with a radiology manager. She provided evidence that included a receipt for a romantic couples massage, but she dumped her beau after discovering she wasn’t the only co-worker with whom he was consensualizing. She says she was harassed after the breakup, including being asked by HR to dress as a go-go dancer during the employee banquet and having one of her patients delayed in radiology for no reason.