From Erin: “Re: Medicity and Axolotl. I heard a rumor that both were on the sale block with active participants. That sure would give a new stimulus to the HIE market.” Unverified. The rumors I’ve heard say that Raymond James is shopping Axolotl, with a possibility that RelayHealth will be announced as the buyer soon. Medicity is getting feelers, supposedly, but it’s going to take some serious cash to get their keys and I’d expect the company to do some acquisitions of its own to raise the stakes. It’s a pretty great time to be in the HIE business since everybody wants government money, connectivity, and control of massive amounts of data. The proposed Ingenix acquisition of Picis may be the first signal that insurance companies (like Ingenix parent UnitedHealth Group, market cap $35 billion) are putting their smartest guys in the room on the problem of how to position themselves for healthcare reform.

From Dan Mann: “Re: Epic. Signed LSU’s 10 hospitals.” Unverified, but this is getting ridiculous. Does any vendor other than Epic ever sell a full system to a 400-plus bed hospital these days?

From Flynn: “Re: Most Wired. Why haven’t you mentioned the winners?” Because I don’t care. Hospital IT is not a competitive sport, other than for magazines hoping to sell ads, their vendor advertisers hoping to sell systems, and their participating CIOs seeking a career-enhancing resume credential. Filling out a survey of what you’re doing with computers doesn’t impress me nearly as much as proving your technology-driven superior patient outcomes and lower costs. Unfortunately, the winners can’t usually do that (and in fact, the relationship often seems to be inverse).

From Kelly: “Re: Mike Cottle. The IT director at the former Sumter Regional Hospital has taken an IT director job at Newton Medical Center (KS).” I interviewed Mike after a tornado destroyed his hospital in 2007.

From Laura V: “Re: Picis. What’s up with your sponsors getting bought?” Inga and I were just talking about that. I’m not claiming a relationship, but companies that sponsor HIStalk seem to have a great track record in being acquired under favorable terms. We like to take a small amount of credit for their success even though we usually lose a paying sponsor, so our celebration is short lived. I did get some nice e-mails this week from some investment banker types who appreciate what I do, so thanks to them.

From Ted Nugent: “Re: Ingenix. The Picis acquisition implies they’ll be doing other acute care deals soon. Healthland or SIS, perhaps? Both have a book out.” Unverified. It’s funny how you’ve never heard a phrase, then suddenly you hear it from a bunch of different people. “Have a book out” means a company is seeking a buyer, as I now smugly know.

From Briana: “Re: CPHIT, CPEHR, and CPHIE certifications. Are they worth pursuing? Do hiring managers care? I have 25 years in healthcare IT.” You’ll get different opinions, mostly depending on whether the person you ask holds certifications, but I consider these (and any other certifications, whether it be CPHIMS, certified healthcare CIO, etc.) mostly a waste of time and money unless you have no other credential and are desperate to hide a lack of experience or formal education. I’m not trying to be harsh, just realistic: non-technical certifications don’t mean anything except as an income source to those who offer them, some of which are purely for-profit companies exploiting career insecurity (lack of a degree, lack of work history, lack of US experience, etc.) If in doubt, read a bunch of healthcare IT job listings and count those that require or favor certification (the military is a possible exception since they do in some cases). Nobody’s going to hire you just because you wave some credential they’ve never heard of. We’ll know the industry has lost its mind if it requires a 25-year HIT veteran to prove they didn’t snooze through it by passing a multiple choice test. But certification can’t hurt, so if you don’t mind spending the time or money, do it with appropriately modest ROI expectations.

From Safety Not: “Re: JAMIA article on unintended consequences of e-prescribing. It is not known whether there are advantages over paper in the real world of medical care.” I didn’t see a full text link, but the abstract says the problem is allowing prescribers to enter free text instructions, basically turning e-prescribing into a clipboard with the same inherent risks. I wouldn’t take that as being indicative of a problem with those systems, but rather how they are deployed. 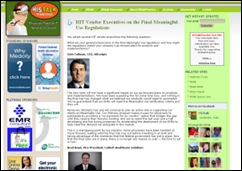 Inga did her usual bang-up job in collecting the thoughts of over 20 vendor executives on the final Meaningful Use rules (and in doing so, earned herself the night off from HIStalk). Some of them are really insightful, offering a fresh take that providers should notice. You can’t ask executives a question without expecting a little sales pitch and she got some of those, but I think every person she interviewed gave some good perspective or advice. Definitely worth a read. You’ll make Inga happy if you add your e-mail address to the Get Instant Updates box while you’re over there since she’s passionate about tracking her stats (she’s insecure in the cutest possible way). 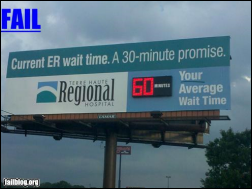 Doctors in Australia complain about the new EMR installed in two hospitals, saying that it’s “unfriendly and wastes a lot of time” and “is an awkward electronic and written hybrid.” I can’t swear to it, but I think it’s Cerner, although the doctors say it’s an old version of whatever it is. “It is a US developed system, but in the US they are using version 11 while we are using version three.”

Confirmed: University of Michigan signs with Epic, ditching its homegrown CareWeb. The price was quoted at $20 million, but I would be shocked if that’s all it will cost (although that’s probably software only). The article also said that UM will be eligible for only $2 million in HITECH money, which also sounds way too low for a 930-bed hospital system. 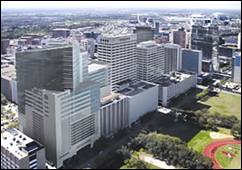 Tim Thompson’s former CIO job at Methodist Houston is posted. Like many or most CIO jobs, this one requires only a bachelor’s degree and experience.

North Shore-LIJ chooses Skire Unifier for managing its capital projects. I’ll be honest: I hadn’t heard of it, but several big hospitals apparently have.

Harvard Medical School toughens up its conflict of interest rule for faculty, prohibiting them from shilling drugs and accepting free meals and trips. Their consulting and board income is also limited and payments of $5,000 or more must be reported on the school’s Web site. My hero, Senator Chuck Grassley, is largely responsible since he investigated some Harvard docs for taking Pfizer’s money (an excerpt to his letter to Pfizer’s CEO above).

GE Healthcare and Boeing are fighting over a section of the communications spectrum. Boeing uses it to test planes; GE wants it for patient monitoring.

WNA competitor Guy ran across this story. A woman who had just delivered a baby is visited by a group of women who enter her hospital room, shut the door, and start beating her up over comments she made on Facebook. People who’ve never worked in a hospital would be amazed at how often human drama unfolds right in the rooms. I’ve taken guns away from patients, watched a newly delivered 12-year-old mother hitting on a hospital security guard, and declined the offer of patients to share their recreational drugs. There’s a reason they put metal detectors and police officers at the ED door — hospitals are one place other than the driver’s license office where community demographics are proportionately represented.