From Sturges: “Re: The Berwick saga is a great view into just how political healthcare is right now (and will be through 2012). It obviously will be a big topic in November, a key part of the Berwick opposition in the first place. It also will command big attention next year as Congress takes on the deficit. The upshot is cuts for hospitals on the spending side in ’11 and a much more political environment for the rule-making process on the regulatory side in ’11-13. Mr HIStalk for Congress? Your slogan can be, ‘I think it’s crap, too’ or, if we need something more positive, ‘Yes we can — anonymously!’” Don Berwick was the right person for the job, I’m convinced (though why he’d want it is beyond me) and even though people don’t want to hear it, some kind of financial allocation (“rationing”) is unavoidable given the way the current and previous administrations have put the country deeply into debt to preserve the illusion of prosperity. It’s political poison to cut healthcare and entitlements, but Berwick is right — we don’t have a choice, especially now that the government controls so much of healthcare delivery and payment.

Speaking of Don Berwick, this article says he makes almost $900K running IHI and listed more than a dozen current jobs on his ethics filings, but most of them are voluntary or honorary, including compensation-free positions at Children’s Boston, Harvard, and Brigham and Women’s that the White House describes as “essentially honorary professorships.” The article suggests that the White House inflated his credentials with those positions, but I don’t see it that way — it looks like they just wanted to include everything whether they were required to or not. It does mention, however, that in taking the CMS job, Berwick’s annual salary will drop to $165K for running a $800 billion organization. That sounds like public service to me.

From TooLate: “Re: iSoft. To make cuts to UK staff — sales and marketing, product strategy, and implementations.” The company looks to be an acquisition target, which means slashing expenses to make short-term numbers attractive. It announces a $30 million credit facility from an obscure US investment fund, which the company will use to replenish the cash it spent on 2010 acquisitions (which didn’t help much given that shares are still at or under 20 cents).

From Lemmy: “Re: E&Y. From this job posting, it does appear that your rumor that they are trying to rebuild their healthcare consulting business is correct.” 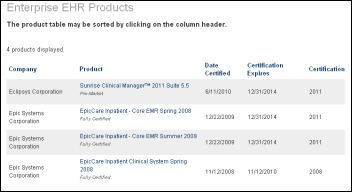 From HITInsider: “Re: Eclipsys. It joins Epic as the only vendors with CCHIT Certified 2011 Enterprise certification.”

From Wildcat Well: “Re: Tim, ol’ boy. ARRA, HITECH, and now $1B for broadband initiatives including health centers. Comcast. Microsoft. All talking. Time for the adults to take over. Most EMR vendors could be an afterthought. Buy stock.” I keep getting rumor reports about EMR executives talking shop with the cable operators, but I don’t have details. Not that I wouldn’t enjoy having some, mind you.

From Frank Poggio: “Re: A Meaningful Ruse. As a follow up to by February Readers Write piece, note today’s announcement: The Centers for Medicare & Medicaid Services has issued a proposed rule imposing a 0.25 percentage point reduction to the fee schedule increase factor for outpatient hospital services. If you do not met meaningful use criteria, which most providers won’t per the recent Glaser interview, you get a reduction in this adjustment. Let’s see, that’ll be 0.33 times -0.0025 = +0.000825 increase! Or is it 0.66 times -0.0025 = -0.000166 decrease? Seems to me either way you come out better.” 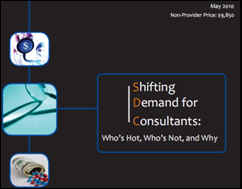 From HCDude: “Re: KLAS report on professional services firms. New players are entering the market. It doesn’t look like all the acquisitions done by IBM, CSC, and ACS worked. One of these days, the big boys will realize this is a cottage business where big companies just don’t ever seem to get it.” KLAS says all those acquisitions drove the principals to leave and start new companies, bringing people with them. They specifically mentioned Encore and Santa Rosa, started by former executives from Healthlink and Superior, respectively, saying that while Encore didn’t make its list because it wasn’t consider by prospects often enough, it still earned as much attention as CTG. This life cyle is obvious to old timers who have seen it time and again: 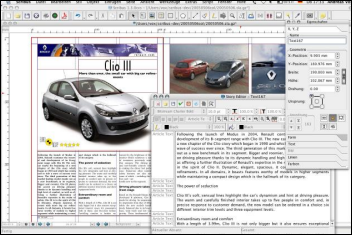 From The PACS Designer: “Re: Scribus. TPD has been testing open source desktop publishing software called Scribus. It’s kind of like Visio, which has been around for a long time, but has more robust features.”

Proposed HITECH-related HHS modifications to HIPAA (warning: PDF) would expand the right of patients to access their own information, restrict some types of disclosure, and expand rules to cover business associates. AHIMA releases a statement supporting the change (one paragraph) and pitching itself and its members as being essential to further discussions (three paragraphs). We asked privacy advocate Deborah Peel, MD of Patient Privacy Rights for her reaction:

What we heard in the remarks of Secretary Sebelius, OCR Director Verdugo, and the National Coordinator for HIT Dr. Blumenthal is a very significant and welcome major change of direction at HHS and ONC. Several VERY strong, positive comments were made today in the press conference announcing the NPRM today by Sec. Sebelius, OCR Director Verdugo, and Dr. Blumenthal which support the patient’s right to privacy and consent. Sec. Sebelius said. “It’s important to understand this announcement [of NPRM, a new Web site, and other new initiatives] are part of an Administration-wide commitment to make sure no one has access to your personal information unless you want them to.” Then during her remarks, OCR Director Verdugo said, “The benefits of health IT will only be fully realized if health information is kept private and secure at all times.” And finally during his comments, Dr. Blumenthal stated, “We want to make sure it is possible for patients to have maximal control over PHI.” And he referred to the Consumer Choices Technology Hearing last week, which demonstrated consent tools enabling patients to make choices about how their information is used and disclosed from EHRs and for HIE.

The great news from the press conference announcing the NPRM was the very CLEAR language, from the Secretary of HHS, to the Director of OCR, to the National Coordinator for HIT, that supports building Americans’ rights to consent and control over PHI into electronic health systems and data exchange. We hope the details in the NPRM actually do give Americans the kind of control over sensitive personal health information that will enable them to trust health IT systems and data exchanges. We will share our analysis of/comments on the NPRM as soon as we have it.

Royal Philips Electronics announces that President and CEO Gerard Kleisterlee will step down in April, announcing that it will nominate former Philips board member Frans van Houten to replace him.

HealthcareMegaMall is running a text ad here announcing a September 1 go-live, but I know nothing about the company. A Google search finds this press release, which describes it as an online marketplace for sharing information, comparing products, and viewing demos (including HIT products, apparently). They’ll also communicate with providers and advertise both in print and electronically (so I guess that explains the ad). 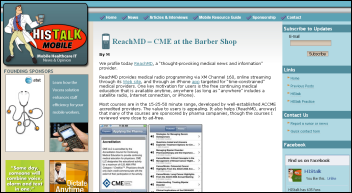 On HIStalk Mobile, we review ReachMD, which offers medical CME via the iPhone.

Gwinnett Hospital System (GA) expects to save $300K per year and speed up its revenue cycle as a result of its medical records digitization project involving EDCO Group’s Solarity technology.

Two Australian hospitals will implement an ICU EMR system from Vision Software Solutions of Queensland. I can’t say for sure, but I’m guessing it’s actually the iMDsoft MetaVision system since Vision is (or was at one time, anyway) a distributor for it in Australia.

I don’t recall if I already knew this, but apparently Resurrection Health System (IL) is going Epic, based on this job listing.

Cal eConnect, the group created to oversee California’s HIE projects and to spend $39 million in federal money, hires Carladenise Edwards as CEO. She was formerly HIT coordinator for the state of Georgia, an HIT advisor to former Florida Governor Jeb Bush, executive director of South Florida Health Information Initiative, and owner of a consulting company that sold services to Florida’s state government.

Strange: hospitals in China, reacting to a rash of patient deaths due to suspected medical negligence, hire local police officers to “improve relations” between doctors and patients. Critics say hospitals are cozying up to police to get them to arrest people who complain about their medical services. State-run media coined the phrase “hospital troublemaker” to describe unhappy family members who display banners, set up altars, or abandon the corpses of their deceased family members, any of which could get them locked up.

The 120-provider Physicians Alliance (PA) plans to implement Allscripts EHR, which will connect directly to its existing Allscripts Vision PM system. Allscripts execs, by the way, are meeting with bankers to secure up to $720 million to finance the buyout of Misys Plc’s ownership stake and the purchase of Eclipsys.

Speaking of HIEs, KLAS says only five vendors are considered in more than 10% of purchasing decisions: Medicity, Axolotl, RelayHealth, ICA, and Epic (the latter in Epic-to-Epic exchanges). Cerner, dbMotion, GE, InterSystems, and Orion rounded out the top 10.

Dr. Bill Tierney is named CEO of the Regenstrief Institute, taking over for Dr. Tom Inui on October 1.

Health Net agrees to pay $250,000 to the state of Connecticut to settle a HIPAA violation case. The suit stems from the theft of a disk drive that contained financial and medical data on 1.5 million consumers, 500,000 of them from Connecticut. The deal also includes two years of credit monitoring, $1 million of identity theft insurance, and reimbursement for the costs of security freezes.

Industry veteran Mark Trigsted is named EVP of healthcare for Diversinet. Trigsted must have friends all over HIT, having worked previously at 1-800-Doctors, Sysware, HEALTHvision, Sunquest, Oacis, McKesson, and GE Medical.

Six orthopedic surgeons from Rush University Medical Center (IL) are under fire for violating Medicare rules. The US District Court says the physicians routinely overbooked their schedules and relied on residents to perform surgeries. A fellow surgeon and a former hospital executive filed the suit.

E-mail messaging between patients and providers improves the quality of care provided, according to a Kaiser Permanente study. Patients with diabetes and/or hypertension were found to have statistically significant improvements in HEDIS scores when patients and physicians communicated via e-mail and were 7-10% less likely to schedule an office visit. 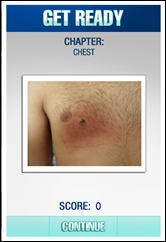 Elsevier launches Top Doc, an iPhone app designed to help medical students and residents improve with visual diagnosis skills. The $15 app includes quizzes with more than 600 questions and allows user to determine the correct diagnosis by viewing actual photographs. You can even have your grade posted to Facebook. Kind of cool, but I’ll stick with Scrabble.