From Jack Ripert: “Re: Cisco Pad. Apparently it will run Android. This may have killer healthcare application if done right.” Cisco will launch its Google Android-powered Cius tablet PC next year: smaller and lighter than the iPad and with two cameras, USB connections for external devices, and an easy tie-in to Cisco’s Telepresence videoconferencing system. They’re shooting for an under-$1,000 price. IT shops aren’t crazy about supporting Android, but they probably like it better than Apple and Cisco carries a lot of CIO clout, so this could be a big deal in hospitals, at least those prepared to wait for it. Those with long memories will recall that Cisco sued Apple over the use of the iPhone name (Cisco was selling a $12 iPhone), then settled with Apple and gave them the name (reported here in January 2007).

From I Have Friends in Military: “Re: AHLTA. To be declared a failure and replaced.” Unverified. That would be huge (and expensive) news if true, but I’m a doubter. Confirmation, anyone?

From Big Dave Brewster: “Re: [HIT publication name omitted]. Looks like it’s going toes-up.” Another HIT rag that I won’t name apparently goes on death watch. They’ve laid off the editor and no ads are displaying on the site (no loss from what I can tell from online stats – it looks like it’s only drawing a handful of visitors each day). Someone said management had already decided to run only advertiser-friendly stories to try to keep the money coming in. Something’s wrong with the cost structure if you can’t make a living charging high five figures for a yearly full-page ad and nearly that for an online ad that nobody will see.

From Denise: “Re: most overused press release buzzwords. You’re gonna love this one.” Right you are, Denise! It’s a press release word frequency list, with the most common being (1) leader; (2) leading; (3) best; (4) top; (5) unique; (6) great; (7) solution; (8) largest; (9) innovative; (10) innovator. Now if some would just write a Word add-in that would count these in a document, I could run a Buzzword Bingo game using real-life press releases and make it part of the HISsies awards. 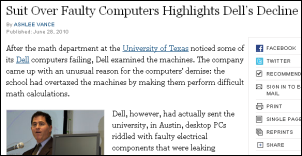 From Texass Longhorn: “Re: Dell. I didn’t know that we at UTex could come up with a math problem so difficult as to bring down a Dell computer.” It was probably trying to calculate Texas football coach Mack Brown’s $5 million salary. Dell, stung by complaints and lawsuits about widespread failure of its OptiPlex PCs three years ago because it used cheap (and leaky) Asian capacitors in 11.8 million of them, is surely embarrassed by this New York Times story. When UT’s math department complained about failing Dell PCs, the company blamed the university for overworking them with tough math problems. An interest fact: the legal firm defending Dell from huge lawsuits over the problem had 1,000 of the bad PCs itself; Dell stiffed them too. Who would have guessed that 90s darlings like Dell and Microsoft would be struggling?

From Del Taco: “Re: CCHIT. Can you please shed some light on who the actual commissioners, trustees, and staff are at CCHIT since Mark Leavitt’s departure? Its Web site is out of date. How many HIMSS employees are still considered as staff of CCHIT? There should be more transparency if CCHIT intends to apply for more government grants.” I e-mailed your questions to both Sue Reber and the press contact at CCHIT Thursday morning. No response yet, but I’ll let you know one way or the other.

Welcome to new HIStalk Platinum Sponsor Capsule Tech, a leading provider of medical device connectivity. The company, operating in 27 countries and 600 hospitals, offers the vendor-neutral, 510(k)-cleared Capsule Enterprise Device Connectivity Solution, which allows connecting any medical device to hospital information systems. Part of that system is Capsule Neuron, a touch-enabled bedside platform for managing device connectivity that adapts to the environment it’s operating in. Our long-time HIStalk friend Ann Farrell of Farrell Associates will be co-presenting Capsule’s July 21 Webinar on medical device integration and its impact on patient safety, care outcomes, and meaningful use, so I know it will be good. Thanks to Capsule Tech for choosing to support HIStalk.

A reader e-mailed me about the cool Mass General ED finder for smart phones. I agreed it’s cool, but opined that they’ll be sued in no time since any obsolete information is going to make someone needing an ED unhappy about being led to a closed one. Another reader noticed that problem when he tried the app: it highlighted EDs in his area that have closed. Its database is from 2007, he believes. They’d better have a lawyer review the disclaimer extra carefully.

MedAptus is awarded a patent for its automated process for capturing professional and facility charges in outpatient settings. 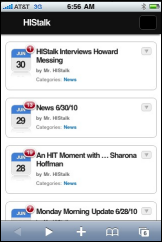 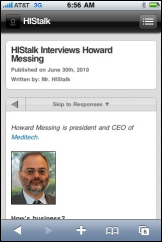 Showing the new HIStalk mobile display is as pointless as showing a fancy TV’s picture in a TV commercial, but just in case you don’t have a smart phone and wonder what it looks like, here you go (thanks to Inga for the early morning screen shots). Several readers e-mailed to say they love it, so thanks for that. One reader suggested creating a downloadable launcher for BlackBerry, iPhone, and Droid to avoid having to go to browser bookmarks, so if anyone knows how to do that, let me know because I don’t. 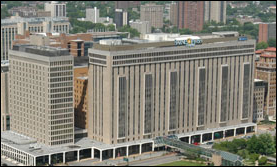 The healthcare industry spent $8.2 billion globally on handheld devices last year. Kalorama Information predicts sales will grow 7% per year for the next five years and physicians and hospitals purchase new IT systems.

Results of the investigation into $11 million worth of delayed charges at University of Iowa Hospitals and Clinics: budget cuts left them with only one person to perform the required manual record review to document the appropriateness of cardiac cath charges, so it didn’t get done. Doh!

Family doctors in the UK say they will not allow the medical records of themselves or their families to be stored on the troubled Summary Care Record, citing privacy concerns.

An interesting All Things Considered story on athenahealth, which processes 30,000 pounds of paper per month. A fun Jonathan Bush quote: “Because what healthcare really is is this awkward word slapped on top of a million little tiny markets.” An interesting factoid: New York Medicaid, among the worst claims payers, requires claims to be filed on special forms that must be ordered from Albany, then hand signed by the doctor.

HIStalk readership easily set a new record in the normally slow month of June. The tally, for those scoring at home: 101,652 visits and 139,766 page views (up 50% over a year ago). Most of that wasn’t because of the Allscripts or John Glaser news since those days were up only a few thousand visits. The e-mail list has 5,746 verified subscribers. Thanks to everybody who made that possible: readers, sponsors, authors, interviewees, commenters, and of course my trusty companion and kindred spirit Inga. It was fun writing HIStalk back in 2003 when nobody was reading, but I admit it’s more fun now.

Weird News Andy notes this story: in preparing for the rollout of its Healthcare.gov portal, HHS gets all cool and takes over a dormant @healthcaregov Twitter account, but forgets to clear the favorites list. As a result, HHS’s list of favorite tweets include several about P. Diddy and the vodka he was pitching a year ago.

Cash-bleeding West Penn Allegheny Health System will lay off 1,500 employees and cut back operations at West Penn Bloomfield. Considering the big money UPMC makes, that looks like an area ripe for consolidation if you don’t mind the idea of UPMC having no competition (like it really does anyway).

If anyone still cares about The Leapfrog Group, it expresses concerns about those CPOE systems it’s been bugging everyone to buy for years. Leapfrog’s tests find that CPOE (actually its decision support component, which isn’t distinguished separately) misses a lot of really dangerous orders. CEO Leah Binder says, “The belief that simply buying and installing health information technology will automatically lead to safer and better care is a myth.” I agree, but wasn’t Leapfrog perpetuating that myth by making CPOE adoption one of its Leaps without really getting into the nuts and bolts? Above is a snip from a 2000 press release, which shows unconditional CPOE love.

A Florida county’s EMS department pays $500K for 911 software that claims to predict where the next emergency call will come from based on historical data. Paramedics say it wastes their time sending them to areas waiting for calls that never come.

Adventist Health System signs up with Lexi-Comp for drug data. I guess they didn’t like Cerner’s Multum product even though they’re running Millennium.

The ever-optimistic MMRGlobal predicts massive MyMedicalRecords and MyMedicalRecordsPro sales increases, with the business model being the 35% skim that doctors get for convincing their patients to upgrade. The company says that “can result in substantially more income to doctors than the $44,000 in government stimulus programs.”

WellPoint notifies 470,000 of its insurance customers that their medical records and credit card numbers may have been exposed in a March breach cause by a problem with its online insurance application system. A customer noticed that she could see other people’s information by tweaking the browser address of her own. She let WellPoint know — by filing a lawsuit against them. 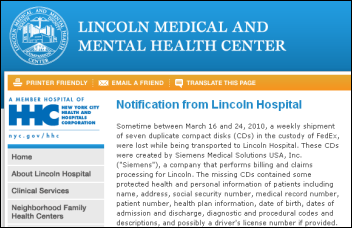 Another breach: Siemens Medical Solutions USA FedExes several CDs full of unencrypted patient information to its billing client, a New York hospital. The CDs fall out of the envelope during transit, apparently, and FedEx assumes they were trashed. The breach affects 130,000 patients.

I’m skipping town for the holiday and haven’t decided if/when to do the Monday Morning Update, so for those who start e-mailing me when the withdrawal symptoms hit late Saturday afternoon (yes, I’m pleased to say those people exist – maybe they’re the same ones who keep track of the readership stats), be prepared for these eventualities: (a) I don’t publish the update until late Monday afternoon; or (b) I bag it entirely. The only HIStalk that will get my undivided attention this weekend is Mrs. HIStalk, but I’ll probably sneak back sometime Monday for some PC intimacy. I hope everyone has a happy Independence Day.