From The PACS Designer: “Re: World Cup apps. Some HIStalkers may want to watch the results of World Cup Soccer as it proceeds through to the final game. The viewing can be done on your mobile device with various apps that have been designed just for the event.” I don’t know anything about soccer except it’s something US kids seem to play until high school and then forget about until the World Cup, but someone sent the picture above from Cape Town, which is pretty cool.

From Buck S. Pearl: “Re: West Virginia. Governor Joe Manchin dedicated his most recent weekly column to the $6 million regional extension center called WVRHITEC (catchy!) The state HIE has been awarded $11.3 million in funding and plans to choose a vendor by the end of the month. In 2006, the state funded an almost $100 million install at WVU Hospitals. Do you think Epic will play well with the HIE vendor?” The state seems to have its act together. Let’s hope they can get Epic connected since the value goes way down without WVU.

From Sorry, You’re Dead, EMR Said: “Re: unintended consequences or befuddled users?” A UK hospital scheduler refuses to make an appointment for a cancer patient, saying their records show that he’s dead. NHS authorities tries to reassure the public that its Choose and Book scheduling system is the fastest way to schedule an appointment, but in the mean time, hasn’t yet found one for this patient.

Readers believe the biggest beneficiary of the Allscripts acquisition of Eclipsys will be Eclipsys customers, according to my previous poll. New poll to your right: did your doctor use an EMR in the exam room during your last visit?

ONCHIT issues rules for its temporary certification program, intended to set up non-profit Authorized Testing and Certification Bodies (ATCB) to certify EMRs so that HITECH money can be handed out even before a permanent program is developed (ONCHIT says that won’t be until January 1, 2012 at the earliest). It was too dry for me to read, so let me know if it contains anything interesting (the PDF is here). Organizations will spend about $75,000 to apply to become an ATCB, with their authorization lasting two years until the permanent rules are finalized.

Dennis Sato tells me he’s serving as interim CIO for Hawaii Health Systems Corporation, where he used to work. 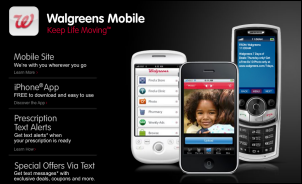 The Walgreens drug store chain uses technology to increase business, offering a mobile site, an iPhone app, and text messaging for special offers and “your prescription is ready” alerts.

HHS posts the agenda for its June 29 hearing on privacy and security tools in Washington, DC, which will features demos and panel discussions.

InformationWeek says Newt Gingrich’s endorsement of EMRs is cause for optimism, apparently not noticing that his somber pronouncement fortuitously came at a rollout bash for a new EMR offering from GE Healthcare, which is a Platinum Member of Newt’s very much for-profit think tank, Center for Health Transformation. According to CHT’s site, its Platinum sponsors enjoy “limited access to Newt Gingrich on your company’s strategy” (maybe his appearance was their freebie for the year), the chance to pay more money to sponsor other stuff, and the chance to chair project advisory groups and influence white papers. Needless to say, Newt’s in favor of a free market approach to healthcare. 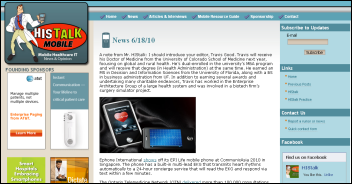 I’ve been busy with HIStalk Mobile lately, putting in a new layout and bringing on a primary editor, Travis Good. He’s finishing a dual MD/MBA program, earned an MS in decision and information sciences, and has experience developing software and designing enterprise architecture. Thanks very much to its Founding Sponsors (AT&T, Vocera, Voalté, and 3M) and Platinum Sponsors (Access and PatientKeeper). If you’re a provider, I’d like to hear your experiences with mobile technologies.

People drawing HIT-related paychecks like the artificial demand created for it by spending taxpayer dollars, they say in a HIMSS briefing during National Health IT Week. More interesting to me was that none of the three members of Congress that HIMSS expected to speak actually showed up, saying their full attention was needed to address the Gulf oil spill. Its 183 partners (mostly vendors) claim this purpose:

Reminders: HIStalk, HIStalk Practice, and HIStalk Mobile each have their own content, readership, and e-mail alerts, so sign up on each site for the latest. The Search function to your right, however, covers them all, clear back to 2003 when HIStalk emerged (at least slightly) from the primordial ooze. Inga and I update Facebook when we post something new, so Friend us or Like us with the widget to your right to connect. Your guest articles and interview suggestions are welcome for all three sites, as are your clicks on the ads of those nice sponsors who keep the lights on and the keyboards clacking. Thanks for reading.

Note to these two vendors: both HIMSS 2009 and 2010 are over, so you might want to stop paying for Google ads pitching your booths.

Cisco, CareFusion, and Medtronic sign on as technology partners with the non-profit West Wireless Health Institute of San Diego, a medical research organization founded a year ago with a $45 million donation to promote wireless health to reduce costs. The billionaire namesake founder is fascinating: he came back from a tour in Vietnam, spent seven years as a hospital administrative assistant, started a telemarketing company, and got really rich. That inspires my own entrepreneurial vision for healthcare: hire a boiler room full of over-caffeinated telemarketers to cold-call patients during dinner to remind them to take their meds, eat less, and get off the couch, then sell the whole business to an insurance company.

Health workers in Malawi use free SMS messaging software to track TB outbreaks, saving money and allowing twice as many patients to be treated. They bought recycled cell phones at prices ranging from $15 to $50 each, a GSM modem for $200, and a donated Compaq laptop. The software is from FrontlineSMS:Medic, a non-profit started by Stanford students that recently received a Google charitable grant.

This interview is a good introduction to insurer UnitedHealth Group’s telemedicine initiative. Patients go to a clinic, where an employee sets up the session with the remote physician using two-way video. The company says they’re paying doctors the same rate as they would for a face-to-face visit. 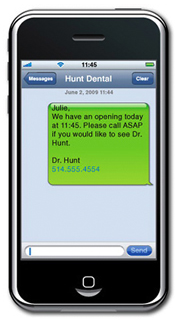 The Senate votes to rescind the 21% Medicare payment reduction for physicians, but too late to stop CMS from applying the cut to checks for services rendered June 1 and after. The House will take up the issue this week.

Just for fun, I’ll leave you with a great Monty Python OR sketch, including “the machine that goes ping” and a clueless hospital executive. The inside joke: Graham Chapman, who plays the doctor, really was one.