From I Told You So: “Re: patients accessing their own records. One in a thousand did. ‘Wicked problems’ were prevalent.” Researchers find little benefit with England’s Summary Care Record and the patient portal view of it. Only one in 1,000 patients who were invited to open an account bothered to do so; many of them tossed the informed consent letters into the trash unread; and those who used the portal found it pretty much a waste. What the researchers found evidence of: improved quality in some visits. What they found no evidence of: improved safety, faster visits, number of referrals, more personalized care, increased patient empowerment, better management of chronic conditions, improved health literacy, positive impact on data quality, and reduced cost.

From Samantha: “Re: Inga. I saw this and just had to ask – is this what Inga’s been up to lately?” Could be — those shoes look familiar. It’s a cool pinup calendar an agency designed for a medical imaging vendor. Inga is still cavorting beachside, although apparently with connectivity since she checks in periodically.

From Winston Zeddemore: “Re: software usability. Software used by 911 operators in Pittsburgh is a likely contributor to the death of a three-week-old.” A 911 operator keys an @ sign instead of # to indicate the apartment number address given by the frantic mother of her dying daughter, which is a reserved keystroke that the software uses as a command to change the address. The software moves to the next alpha address, the misrouted paramedics take an extra seven minutes to arrive; and the baby dies an hour later. They don’t know if the delay contributed. Implementation of the $10 million system is scheduled to be finished in August.

From Mr. Science: “Re: Howard Messing of Meditech. He’s now the chairman of the board of the Museum of Science in Boston.” Funny – I had just gotten off the phone with Howard when your Rumor Report came through. I could have asked him about that, although he’s a man of few words. I’ll have the interview I was doing with him up shortly.

From p_anon: “Re: Atul Gawande. He gave the commencement speech at Stanford’s School of Medicine last week.” It’s excellent. Here’s a snip:

Half a century ago, medicine was neither costly nor effective. Since then, however, science has combatted our ignorance. It has enumerated and identified, according to the international disease-classification system, more than 13,600 diagnoses—13,600 different ways our bodies can fail. And for each one we’ve discovered beneficial remedies—remedies that can reduce suffering, extend lives, and sometimes stop a disease altogether. But those remedies now include more than six thousand drugs and four thousand medical and surgical procedures. Our job in medicine is to make sure that all of this capability is deployed, town by town, in the right way at the right time, without harm or waste of resources, for every person alive. And we’re struggling. There is no industry in the world with 13,600 different service lines to deliver.

From Techsan: “Re: Epic. I can confirm that Epic is supplying new customers with their interview tools, which I understand are self-developed, and recommending hiring college grads to staff projects. One of our clients just completed using the tool for internal candidates and will be interviewing college grads soon as they near the beginning of their implementation. I am also working with a new Epic client and Epic made the same suggestion.” The debate rages: are inexperienced youth the best choice for implementing sophisticated clinical systems? You can’t argue with the results – Epic’s implementations almost never fail and those of their competitors often do despite having lots of experienced hands on deck. I’ll make the argument that Epic’s methods make it not just possible, but desirable to use easily managed, job-appreciative noobs who don’t bring any preconceived notions or egos to the table (not to mention “experience” that’s mostly with bad vendors or hospitals). As a non-noob, I’m as threatened and offended by that fact as anyone, but you can’t argue with Epic’s results and it’s never Epic’s implementations that are implicated in the patient-endangering case studies you read about. Plus, it gives them endless scalability because it takes little time to bring in a fresh wave of troops. I think it’s brilliant as long as it continues to work.

Listening: The Young Veins, dead ringers for the cheery Help-era Beatles, but from Topanga, CA and featuring two former members of Panic! at the Disco.

Someone sent me a copy of the just-released CPOE Digest from KLAS. I’ll keep it high-level since they’re charging vendors $14,850 for a copy and I only glanced briefly so I wouldn’t be tempted to spill the beans, but I was looking to see how specific vendors did. Providers get the report for $980, by the way, and for those in the market for a system, I’d say it’s worth every penny since there’s a ton of detail.

Ed Marx is always diligent about updating his CIO Unplugged postings to address any reader questions or comments. He’s done so with last week’s staff retreat one.

This CBS Evening News video shows the security exposures inherent in copy machines, which have hard drives that retain digital copies of everything scanned. Machines purchased used contained everything from police records of sex offenders to a New York insurance company’s machine that contained 300 pages of patient records, one shown redacted on the screen bearing the Montefiore logo.

A couple of readers e-mailed me their displeasure about an extended outage of all Intuit Web sites. The online versions of Quicken, QuickBooks, and TurboTax became offline versions when something went wrong (Intuit isn’t saying what). Most importantly to the hospitals, Intuit’s QuickBase project management software was unavailable. It’s not cheap: the lowest monthly price is $299 and goes up from there based on the volume of users, data records, and data storage.

Weird News Andy adds to his body of literature about people who suddenly start speaking with a foreign accent after some medical event (this is his second report of that phenomenon). A Canadian woman thrown from a horse suffers brain damage, temporarily loses her ability to speak, and then regains it but finds she suddenly has an Irish/Scottish combo accent, including the unintentional use of words she had never used such as “brilliant” and “wee.” Maybe I have a wee bit of that since I notice I’ve said “brilliant” a couple of times.

Speaking of NPfIT, the head of one trust that opted out of it says it “put back the contribution of IT in the NHS by more than ten years.” His trust, which he calls “one of the bad boys who left NPfIT,” passed on CSC and iSoft’s Lorenzo system, choosing Meditech 6.0 instead in a $60 million project (sounds way high for Meditech).

And speaking of iSoft, its reassurances didn’t help as the stock keeps diving (now at $0.25, but only after a big run-up on Tuesday), layoffs are reportedly being planned, and executive chairman Gary Cohen, who I interviewed in April, relinquishes that role to focus on his CEO responsibilities.

I got a copy of an Eclipsys customer e-mail describing how the company will handle enhancement requests going forward and I have to say it’s smart (I probably think so because I’ve advocated something very similar here in the past). Instead of the idiocy of requiring requestors to show up at the user group meeting and then taking a show of hands that rewards the rich hospitals that send lots of attendees, the Eclipsys method first involves an internal selection of the best ideas, which then move to the Invest stage. Each client organization gets $500 in Eclipsys Bucks to allocate among all the enhancements they like best, making it easy and fair for Eclipsys to simply choose the ideas that get the most support. Customers are forced to think like the vendor – do they spend their Bucks on several little changes, or shoot the whole wad on a big change and hope that’s enough to get it approved? One refinement might be to get $500 in Veto Bucks so the practical hospitals can kill off all the lame, site-specific monstrosities that the big academic medical centers always demand that will spoil everybody else’s workflow, but maybe that’s a 2.0 project.

Best Buy donates its Geek Squad service to Children’s Hospitals and Clinics of Minnesota, providing and supporting Skype, web conferencing, and video games for the families of patients.

The 45-year-old billionaire founder of Salesforce.com will donate $100 million for a new children’s hospital at UCSF.

The federal government sues Oracle for fraud, claiming tens of millions of dollars in overcharges (illegal ones, not just the usual high Oracle prices). A former Oracle employee turned whistleblower claims the company intentionally hid discounts it gave to big customers to avoid giving the feds its best price.

EnovateIT expands its mobile and wall-mounted workstation into overseas healthcare markets, citing similar demand to the US as EMRs replace paper.

AT&T issues an apology to iPhone fanatics like Inga who had problems trying to get their latest toy (what recession?) Sales were ten times higher than for the 3G last year and they ran out. AT&T says they received 13 million visits to their site in a single day by people checking their upgrade eligibility. 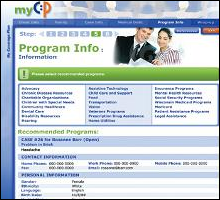 A Madison, WI law firm gets a $1.2 million NIH grant to create an application that will check patient eligibility for government programs. I don’t quite get the business structure: the law firm (ABC for Health) is a non-profit that connects families with healthcare services, but the grant went to its for-profit subsidiary called My Coverage Plan, Inc. I guess they plan to commercialize the result. It actually sounds pretty cool for what it costs, given the huge money being thrown at less obviously beneficial HIT projects (at least if you like the idea of government paying for software to identify more people for which it can pay for healthcare).

A vendor demonstrates a 3.7 ounce smart phone that also contains full ECG capabilities at a Singapore trade show. The owner touches their fingers to the phone, their reading is sent to a 24-hour, clinician-staffed center, and within minutes they get a text message back with the results. $100 covers the device and 10 ECGs per month (do people really need all those ECGs?) The vendor, EPI, also offers virtual health records; a global physician network; and a health suite that measures blood pressure, blood glucose, and cholesterol.

Botswana opens a 200-bed digital hospital that includes an EMR, PACS, a wireless network, cart-mounted PCs, wireless telemetry, and VoIP telephones. I’m not sure its American consultants did them a favor by introducing Western methods: “For example, the notion that in the outpatient setting you get triaged by a nurse, seen by a doctor, then down to lab and radiology for tests, then back to OPD to checkout is a completely different process for them.” I bet they had some really primitive ideas before, like making the freely mobile employees come to the ill patients instead of vice versa.

The suspension of CPSI’s CFO until a misappropriation of funds investigation is complete hurt the stock a little today, with shares down 8.3%.

You can’t make this stuff up: one of the several ambulance-chasing “breaches of fiduciary duty” law firms trying to work up a class action investor lawsuit against Eclipsys is Bull & Lifshitz, LLP.