From Healthcare Idiot Savant: “Re: Allscripts. They are supposedly near to announcing their acquisition of the Centricity software, the old IDX suite, from GE. Timing?” I’ll guess June 1.

From Lady of Spain: “Re: editorial. Tell me what you think about this editorial. Incredibly uninformed, right?” Too many wordsmiths claim to be HIT pundits just because they’ve churned out a few articles or interviewed people from the sidelines instead of actually working in healthcare or IT. All in all, this one isn’t the worst I’ve seen, though, just not very insightful.

I’m running an old (legal) copy of Office XP at home since I don’t use it much, but I figured it was time to upgrade. I’ve been running the Office 2010 beta and I like it just fine, so I’ve been watching for deals on the licensed version, due out this summer. Here’s one that I just bought this morning: Amazon has Office Home and Student 2007 for $99.99, free shipping, and a free upgrade to Office 2010 when it comes out. Plus, that package includes three licenses that can be used by members of the same immediate family, so you’re down to as little as $33 per user. If you don’t need Access or Outlook, this is a great way to get the 2010 versions of Word, Excel, PowerPoint, and the underappreciated OneNote cheap. It’s a strong clue as to why Microsoft is struggling — remember when Office cost something like $400?

Speaking of Microsoft, who can resist watching an overweight, red-faced Steve Ballmer nearly stroking out on stage as he hysterically professes his undying love for everything Microsoft? I feel cheated that he didn’t freak out equally at HIMSS a couple of years ago.

According to my last poll, around 58% of HIStalk readers think a single-vendor strategy is a good idea for hospitals, primarily because integration and support are theoretically better. Those who like a best-of-breed strategy instead most often cite weaknesses in individual applications as a good reason not to give one vendor all the business. New poll to your right: if you were diagnosed with a psychiatric illness and your doctor or hospital shared your electronic information with other providers, would you be comfortable that it would remain private or would you worry about that?

Dell spent $760K lobbying the federal government in Q1, with an unnamed but apparently significant part of that amount going toward influencing decisions about HITECH money. Microsoft spent $1.72 million during the same period, also hitting HITECH.

A retired Cincinnati cardiologist will get $23.5 million for his role as whistleblower in a DOJ lawsuit against the Health Alliance of Greater Cincinnati and Christ Hospital, accused of preferentially scheduling cardiologists based on the number of referrals they generated. 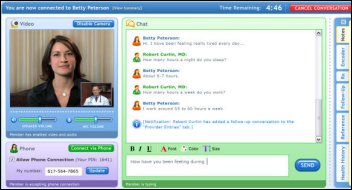 Doctors at a Minnesota hospital are beta testing technology from American Well that allows them to communicate with patients via videoconferencing, IM, and VoIP. I think I’d love that, either as a patient or a doctor. The problem has always been that few people using desktop PCs had webcams or microphones, but now that most PC sales involve laptops, those are usually standard. That’s a significant yet seldom observed development when it comes to online collaboration.

I ran a reader’s question about whether Jefferson Regional Medical Center of Pine Bluff, AR could really have upgraded Eclipsys Sunrise to 5.5 in 30 days. JRMC CIO Patrick Neece was nice to provide this summary:

JRMC and Eclipsys finalized the implementation plans at the end of March 2010. The upgrade steps began the first of April 2010 and took approximately 30 days. The implementation encompassed all of the Sunrise Clinical Manager components we have implemented in the hospital including house-wide clinical documentation and core functionality for med/surg and sub-acute areas, critical care, 12 ambulatory clinics, emergency department, labor and delivery, Sunrise Pharmacy, Knowledge-Based Medication Administration, Device Integration and other related components. It also included installation of additional hardware, Microsoft software upgrades, configuration changes, report changes, testing, and training for the technical staff and end users. As with any upgrade, there were problems that had to be worked through, but we were highly confident in the JRMC and Eclipsys team who preformed the upgrade and that we would have a successful implementation. 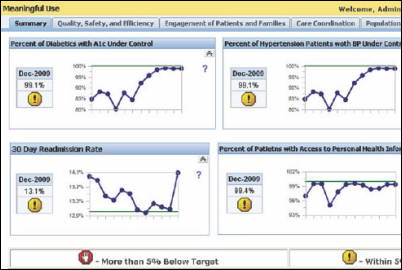 Former HIMSS Analytics CEO Dave Garets, now with The Advisory Board Company, joins the board of Health Care Data Works, a Ohio State spinoff led by former OSUMC CIO Herb Smaltz that sells a data warehouse solution. The company offers a pre-built Meaningful Use dashboard (above).

A Hawaii clinic’s inconsistent and time-consuming EMR data reporting process is improved after a local technology company’s change. The article doesn’t name the EMR vendor or describe the change that was made, but it says one report that took 55 hours to run now takes less than a minute. It sounds to me like they added database indexes.

The University of Florida Health Science Center and Shands HealthCare announce a $580 million, five-year collaboration that includes implementing Epic across the system.

Now that I’ve got a Facebook page, I see that I should wish my new FB friend John Halamka a happy birthday this Sunday, with John Glaser’s coming up on June 2. Thanks to all who have friended me and who have clicked “like” on the HIStalk widget to your right. Social networking is exactly like high school, including the competitive aspects, so public displays of even virtual-only camaraderie are important to one’s standing.