From: Scoopy Sales “Re: Janet Dillione’s resignation. I see HIStalk scooped everyone on this and the ‘news professionals’ are just now reporting the story.” Ha! Mr. H will like that comment. Thanks again to the reader who tipped us off last Friday about Dillione’s resignation as CEO of Sieman’s HIT division.

From: PACSMan “Re: Dillione. I know you had run this yesterday but this confirmation came across just now. The timing is beyond strange- she gives a press conference 3 weeks ago, speaks at HIMSS and even has the damn thing podcast and now eaves to ‘pursue other opportunities’ after 27 combined years at SMS and Siemens. Something gives here- and I bet it ain’t pretty a ’tall….”

From: Mrs. Kravitz “Re: McKesson report.The recent Leerink Swann HC equity research report reads badly for McKesson. After talking to a CIO at a large client base they are pessimistic on McKesson’s ability to get to Stage 1 meaningful use; HEMR and Horizon Clinicals v10.3 still not GA despite representation to the contrary.” I don’t have access to the report. If you have an opinion, chime in.

I noticed that ComputerWeekly also  picked up a reader-supplied rumor, this one about a recent director-level resignation at iSoft. ComputerWeekly actually quoted HIStalk, then added iSoft’s confirmation that Keith Kirtland left for “personal reasons.”

Five Alegent Health hospitals implement Design Clinicals’ MedsTracker for electronic medication reconciliation. The CMO claims that an impressive 100% of the hospitals’ admissions and discharges were reconciled electronically on day two of the go-live.

The ONC publishes its proposed rule establishing two certifications programs to test and certify EHRs. CCHIT will not be granted grandfather status for testing, though they will likely be one of only a few organizations ready and able to qualify under the new program. Organizations wanting to qualify as an “ONC-Authorized Certification Body” for the “temporary” program would be required to submit an application and demonstrate its competency to test and certify EHRs. The temporary program could make it possible for full EHRs and EHR modules to secure certification as early as this summer. The temporary program would expire the first quarter of 2012 and replaced with a permanent program run by an outside certifying organization. 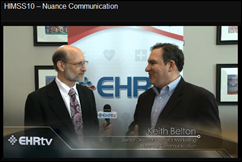 I see the folks at EHRtv have begun posting their vendor executive interviews from HIMSS. Dr. Eric Fishman poses some great questions to leaders from Nuance, M*Modal, Allscripts, Eclipsys, and NextGen in these face-paced and engaging spots. 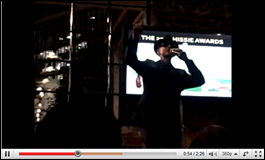 DR HITECH live at Max Lagar’s in Atlanta, rapping about Meaningful Use. Doesn’t get better than this!

Weird News Andy sends over this story, which is actually more disconcerting than weird. The NHS, as it continues to create its national database of patient medical records, is suppose to give patients an opt out option before their information is added. Instead, doctors claim the government is rushing the project through and  patient information is being uploaded before  patients have a chance to object. Doctors also claim the government is not adequately educating patient on the database project, nor making the opt out option easy enough for patients to select.

The VA is busy working on Aviva, the next-generation version of its 20-year-old VistA EMR. Aviva is designed to be Web-enabled, modular in design, and capable of easy data exchange with other EMRs. Peter Levin, CTO for the VA, compares the project to “trying to replace a tin can on a string with a cell phone system.”

A former MedAssets contract employee, who used a fake identity to get her job, is accused of accessing the financial information of up to 2,400 patients. UTMB was a MedAssets billing service client at the time and Katina Rochelle Candrick is believed to have gathered social security numbers, dates of births, and credit card information on UTMB patients. Candrick has since been arrested. 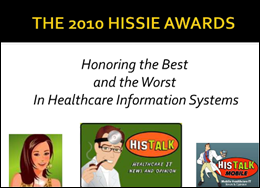 In case you missed the actual HISsie Awards presentation, check out the presentation we ran at the reception last week. It’s loaded on SlideShare and apparently the transitions only work if you download it to your system. You’ll want to download it to fully experience the fun – as well as identify the winners and see the pie hit the face of a certain CEO. There is likely some way to post the slide show and have the transitions work correctly, but I am too lazy and too short on time to figure it out.

The folks at Surgical Information Systems asked me to let readers know they’ll be at the AORN meeting next week in Denver. If you’re attending, check out their session “Creating a Unified PeriAnesthesia Medical Record to Improve Clinical, Operational, and Financial Outcomes.”

The public continues to weigh in with opinions on the latest meaningful use definitions. CMS posted a few additional comments last week and folks are still concerned that the bar is set too high, especially in the early years. The note below questions the exclusion of CPOE in the ED when measuring the total percentage of electronic order entry in a hospital:

The current proposed definition of meaningful use seems to exclude the use of CPOE in the ED as a measure of determining the current percentage of electronic order entry within the hospital setting. That doesn’t make a lot of sense if the purpose of the graduating meaningful use criteria are intended to promote and reward a hospital’s progress in deploying CPOE. Many hospitals will start with the ED to deploy CPOE because of it’s complexity and workflow. The current proposed definition will not recognize those organizations who are making good progress with CPOE simply because they may have started in the Emergency Department. That seems counterintuitive and not within the original spirit of advancing CPOE deployment to 100% within several years. In other words, who cares where an organization starts its deployment as long as progress and total percentages are actually achieved.

Mr. H is back home sometime this weekend. As gratifying as it is to know that HIStalk can stay afloat a few days without him, no one will be happier than me to have him back in charge, especially since he makes HIT so much more fun.