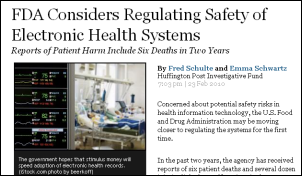 Just published by The Huffington Post Investigative Fund: FDA is “moving closer” to regulating EMRs after receiving reports of six patient deaths and 44 injuries related to system malfunctions. Examples included an OR system whose lockups forced nurses to re-enter data from memory and another that didn’t display allergies correctly (hardly news if you’ve worked in HIT for any length of time, but apparently FDA was surprised). An FDA official admitted that the agency has steered clear of regulating HIT, but says, “In light of the safety issues that have been reported to us, we believe that a framework of federal oversight of HIT needs to assure patient safety.” Reaction from vendor executives at the recent hearings was interesting: Epic’s Carl Dvorak was quoted as saying regulation wouldn’t necessarily ensure safer products or encourage innovation, while Cerner says it supports making voluntary safety reports mandatory because it’s “the right thing to do.”

I have a couple of interviews yet to post, so once those are running, I promise you will see fewer HIStalk e-mail blasts. All of the interviews were fun to do and I’m pleased to bring them to you. I’m hoping to clear the decks before HIMSS since you know I’ll be writing every day from there.

This is new at HIMSS: the naming of the HITmen (and women) of 2010, the most powerful healthcare IT leaders. There’s an invitation-only reception at the conference and some PR, I’m sure, for the winners. Some familiar names are on the host committee: Jonathan Bush of athenahealth, John Halamka of BIDMC, Steve Lieber of HIMSS, and the one that sticks out like a sore thumb, Mr. HIStalk – CEO of HIStalk (and yes, I’ve taken considerable e-mail ribbing about that, but I swear the CEO thing wasn’t my idea and I have zero delusions of grandeur). More to come.

Here’s a shout-out for Software Testing Solutions LLC, a new Platinum Sponsor of HIStalk. The Tucson company’s RATIO tools perform automated software testing, which I hope you hospitals and practices are doing before simply moving vendor code to production (both unexpected bugs and manual testing are expensive, as I can vouch from unfortunately personal experience). You set the application environment, the scope, and the transaction volume, then let the script take over to perform and document the tests (it even works with Citrix). If you have Epic inpatient or ambulatory, Eclipsys SCM, or Sunquest, you could be validating your orderables, generating test billing transactions, and validating new vendor releases and interface changes with minimal effort and with documented consistency. Thanks much to Software Testing Solutions for supporting HIStalk.

Weird News Andy expands his media sources to video, locating this story about a Kentucky psychiatrist who attacked a patient in his office with a sword, with his only statement after the fact being “four quarts low on the truck.” His patient, unfortunately, sustained life-threatening chest wounds. The uncharacteristically somber WNA also finds this story that he captions as “Patients or Guinea Pigs,” describing the FDA’s OK to dispense with informed consent guidelines for EDs involved in a resuscitation study.

I figure it’s the least I can do to wish Encore Health Resources a happy first birthday since they’ll be buying a few hundred of you drinks and food next Monday evening at the HIStalk reception, so here’s to them (and their reception co-sponsors Symantec and Evolvent).

The fight is on for Amicas, with Merge Healthcare putting a $248 million offer on the table next to the earlier $217 million one from Thoma Bravo. Amicas already agreed to the Thoma Bravo offer, so the company is urging shareholders to vote that way, saying it doesn’t trust Merge’s financing.

My upcoming guest editorial for Inside Healthcare Computing: Dark Side on Line One: If Cash Really is King, Now’s the Time to Leave That Hospital Job. A sample of its caffeine-fueled prose: “If you have a loving, loyal hospital spouse who makes you happy and puts up with your idiosyncrasies, then think carefully before running off with the tarted up, drug-seeking vendor stripper who is whispering in your ear to throw it all away to run off to Las Vegas with her to gamble. It’s not nearly as fun as it looks.” It’s not Camus, but it’s what I do.

Porter Medical Center (VT) gets a mention in the local newspaper for its planned Meditech implementation, which awaits certificate of need approval. I like the CFO’s response to possible ARRA incentives: “There are all kinds of experts at the state and national level that swear that this will save money. I’d be the last person to try to guarantee savings.”

Also getting a nice newspaper story on its EMR implementation: Stormont-Vail HealthCare (KS).

More on the pharma-sponsored depression “test” that WebMD ran, pitching Lilly’s Cymbalta: no matter how you answered the 10 questions, the response was always “You may be at risk for major depression.”

Nevada banks are pre-qualifying doctors for EMR purchases just like they do for mortgages, expecting a jump in Q2 purchases. On the one hand, banks say nearly all doctors are contemplating an EMR purchase. On the other, falling home values mean banks aren’t as willing to take personal guarantees for the loans. A nice article by the Las Vegas Business Press.

TriZetto launches its PHR for health plan members. The press release was full of a lot of product names that I wasn’t really interested enough to follow, but it does interestingly distinguish EMRs from EHRs (as I do).

Genesis HealthCare (OH) seeks $25 million in taxpayer-backed loans to Epic, which it hopes will quality it for $12.5 million in stimulus money.

A Maryland fire department’s computer system loses over 10,000 ambulance transport records and fails to file required reports when its computer system has problems in its first year of use. The $275K HealthWares reporting system has been scrapped, with the head of the firefighter’s union saying, “”I thought there was no reason to purchase this when probably an overwhelming majority of fire departments in Maryland use EMAIS for free. There was no reason at all to reinvent the wheel. It was a complete waste of money.”

Robert Miller is promoted to North American president of iSoft.

The White House wants to create a government-wide Federal HIT Task Force, chaired by David Blumenthal, that would coordinate healthcare IT among federal agencies. Those could include the VA, DoD, Social Security, CDC, NIH, and FDA.

Indian Health Service will upgrade its RPMS EMR system to meet meaningful use requirements, including addition of a master person index, a patient flow dashoard, and an event tracking tool to ensure follow-up of abnormal lab results.

Odd hospital lawsuit: a city judge held in a mental health facility for court-ordered evaluation of suicidal behavior files suit against more than 30 employees of the health system, the district attorney, other county attorneys, and Aramark. When contacted about the suit, his only comment was, “Payback is a (expletive), and I get to reform mental healthcare in the process.”

Clearly HIT vendors and their PR companies are working overtime to issue pre-HIMSS press releases. Some of the news is meaty, though a fair number are a bit more ho-hum. Save yourself some time and peruse these highlights.

LSU (LA) expands its HealthLink project to include clinical data exchange between the LSU health system and its regional physicians. LSU Healthlink will use CarefX’s Fusionfx product to facilitate data access.

Emergin, a division of Philips Healthcare, announces a new interface between the Emergin alert management platform and Voalte’s communication server. The integration will facilitate alert message notifications from the Emergin system to Apple iPhones and iPod Touches and provide real-time communication between caregivers.

HealthPort says it has added electronic delivery functionality to its release of information process.

PatientKeeper partners with NextGate to offer NextGate’s enterprise MPI solution for its customers. NextGate’s MatchMetrix Suite will connect with the PatientKeeper platform to provide a single view of patient information. 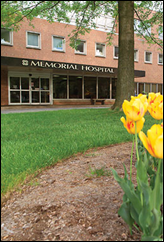 Wellsoft shares word that the ED docs at Memorial Hospital (PA) are successfully using Dragon Medical to navigate and dictate within the Wellsoft EDIS.

As mandated by the HITECH Act, HHS posts a list of 36 reported health information breaches from private medical practices, hospitals, health systems, and public agencies. Most of the breaches were the result of theft or loss of a computer/drive/backup or other storage media. The breach affecting the most people involved the theft of hard drives from BCBS of Tennessee. The potential number of individuals affected: 500,000.

Here’s your HIMSS tip of the day: I see that Medi-Span is giving away a couple of trips to the Indianapolis 500. It’s labeled a “luxury trip package” but that’s still not much of a draw for me. I will forego entering Medi-Span’s contest and thus improve the odds for real fans. Of course, I expect you race car fans to return the favor when it comes the drawings for a nook eBook Reader (Dialog Medical) or Amazon Kindle (Brocade).