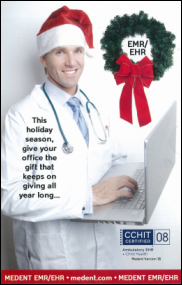 From C’mon Man: “Re: would you buy an EHR from this man? Or a demonstration of how easy it is to smile at the patient, hold the computer, and enter data all at the same time. I do not get it, why is anyone fussing? This ad has sold me, outdated CCHIT and all.” Hey, have some holiday compassion: it’s tough making a living trying to get doctors to use EMRs they don’t really want. My first thought reading the “gift that keeps on giving” part of the ad: the old joke about syphilis.

Note to Mississippi Governor Haley Barbour: don’t ask a question if you don’t want to know the answer. The Gov, getting his tweet on, sends out a blurb pitching cost cutting. An administrative assistant in University Medical Center’s nursing school tweets back, suggesting that maybe he should get his medical exams during normal working hours like everybody else instead of requiring employees to come in after hours on overtime. The Governor’s Office is not appreciative, tracking her down and demanding that the hospital’s compliance officer deal with her. They did, citing HIPAA laws in telling her to quit or be fired even though she didn’t know anything about his health first-hand. The Governor’s Office claims they didn’t contact anyone.

I just noticed that the verified e-mail subscriber count has passed 5,000. Thanks to everybody who reads HIStalk. I can’t express how satisfying and humbling that is, especially when I’ve had a sucky day at work (not today, though – it’s great with everyone taking time off, although the long winter grind starts in earnest next week).

From Thanks: “Re: KLAS. Thank you for publishing the article on KLAS. I was really upset that you never said much lately about this. KLAS is a big scam.” The Readers Write article by Swearingen Software CEO Randall Swearingen drew quite a few diverse comments. Some believe KLAS is an evil money factory, while others say their approach is reasonable. Not that you care, but here are my observations about KLAS.

Back in 2005, I wrote an editorial pitching the idea of a standard healthcare database schema. I’ve seen other folks pick up that idea lately. Given the push for interoperability, I still like the idea. Here’s a snip of what I said then:

This is where my noodling got out of hand. Why can’t every vendor voluntarily or mandatorily use the same database layout for core information? How many ways can you express and repose standard elements such as date of birth, gender, address, etc.? Vendors can, when under duress, feed their data to a standard interface. Why can’t all systems just use an approved core set of tables, updated by the same core set of business rules, and then add their value through additional related tables, GUIs, business rules, etc.? Everyone’s patient database could look and work the same. Seen one, seen ’em all. Customers would be as thrilled by this idea as vendors would be appalled by it. Standard reports would work for every hospital, not just those of a particular vendor. Data translation for third-party reporting would be a no-brainer. Conversion of one system to another would be a piece of cake. Hospitals could easily merge and un-merge with each other to their heart’s content, with data conversion and extraction being assured. You might even have your choice of database software, given an Internet-like abstraction layer that supports everything from Oracle to Cache’. Talk about your interoperability!

An unconvincing article a couple of months ago concluded that remote monitoring of ICU patients by intensivists had little impact on outcomes. I can’t see the full text of this new JAMA article, but it seems much more conclusive, even though its conclusion is the same: “Remote monitoring of ICU patients was not associated with an overall improvement in mortality or LOS.” It’s the CPOE problem, however – many of the institutions had it, but weren’t really using it (although that in itself might, as for CPOE, give an organization reason to question its own capabilities before whipping out the checkbook). 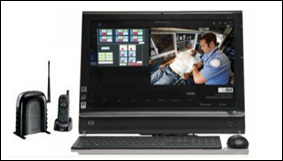 Inga’s got a couple of great interviews running on HIStalk Practice: Scott Decker (new president of NextGen) and William Zurhellen, MD (a pediatrician and CCHIT expert panel member who has some shockingly frank things to say about the state of EMRs, CCHIT, and standardization).

Listening: Ben’s Brother, slightly whiny Britpop that still sounds good, although I eventually needed some nasty chick music to offset it and headed over to desk-drum to L7 for the zillionth time.

OHCHIT has an upcoming conference call to talk about the $6 million it will spend to get universities to develop a health IT competency exam (warning: PDF) for degree-less HIT people, a little chunk of its $120 million Health IT Workforce Development Program. 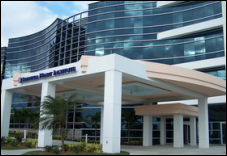 Odd lawsuit: a man sues Barnes Jewish Hospital after he claims he slipped on a Q-tip while visiting a patient, causing extensive injury, disability, and suffering.