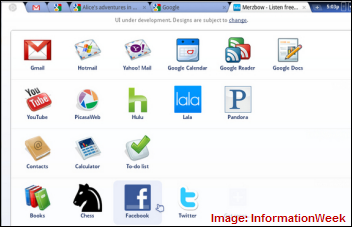 From The PACS Designer: “Re: Google Chromium OS. Courtesy of InformationWeek, we can get an idea of what Google’s Chromium OS is all about, even though it won’t be released for another year.”

From Joe Bologna Sandwich: “Re: [health system name omitted]. I heard second hand that they will cancel their contract with [vendor name omitted] in January.” I’ve e-mailed the CIO. Sorry for the redacting, but this is a publicly traded vendor and a humongous contract, so I’d like to confirm the rumor if possible.

From Nancy: “Re: Bobbie Byrne. The pediatrician, Eclipsys alum, and former clinical director of CCHIT is leaving CCHIT to become CIO of a hospital.” According to her LinkedIn page, she is now VP of informatics at Edward Hospital (IL), having left CCHIT sometime this month after only seven months or so.

From Cracker: “Re: Spheris. Warburg Pincus is looking to unload its albatross Spheris stake to CBay Systems, the largest medical transcription company in the US since their purchase of MedQuist in 2008. Spheris, second largest, recently ended a three-year run as a quasi-public company — public debt, not public stock. Uncompetitive technology and a heavy debt load handicap Spheris as medical transcription prices fall.” Unverified. Spheris doesn’t file SEC reports any more, but management had said margins and revenue were down. I also noticed that Spheris is no longer listed on the portfolio page of Warburg Pincus even though it’s still showing in the Google cache of the page, so I’d say something is up.

From Anonymous Coward: “Re: NHS cutting back on IT project. Enjoy your writings a lot. I work for one of the Big Vendors that I wish you talked about more — we are doing some good stuff (finally….).” Budget deficits take their toll in Britain, with a proposed large scale-back or maybe outright scrapping of the $20 billion and overdue NPfIT project. The arguments are the same as here: do those big systems really pay their way in terms of outcomes or cost reductions? The Conservative Party has proposed moratorium on all government computer projects, claiming the Labour government has spent $162 billion on IT in the past 12 years and another $115 billion will come due in the next two years. Lots of interesting comments on NPfIT are here.

Thanks to our HIMSS contact for chasing down our inquiry (on behalf of a reader’s question) about how government employees are compensated for speaking at the annual conference.She says HIMSS works within federal guidelines and does not offer honoraria or expense reimbursement to government employees (as I assumed). David Blumenthal asked for nothing and was offered nothing.

I like the move by Francisco Partners to buy QuadraMed. QuadraMed has had more than its share of struggles, all of them conducted in the spotlight since it was a publicly traded company (albeit with little benefit since market cap was low and share price stagnant). It had some old preferred shares that were so favorable that those shareholders were getting much of the cash. It has good products (HIM, Affinity, and QCPR) that ought to be selling well, especially if the QCPR migration to Cache’ is indeed complete. Francisco Partners has been a good steward of the companies it has bought, getting their houses in order, distancing them from previous baggage, and clarifying their identities and strategies. I think it’s the best possible outcome for customers and employees. A reader tipped me off with perfect accuracy last night, so I watched the news ticker this morning to jump on the announcement as soon as it went out.

The Chicago inspector general will review the 13 bids the health department received for a mental health system, determining whether anything suspicious was involved in choosing Cerner over 13 other bidders. The system had disastrous financial repercussions, it’s claimed, when billing problems prevented collection of money from the state for services rendered.

I was a bit loosey-goosey in my description of the products of new sponsor BridgeHead Software, so their VP contact provided clarification. Just so I don’t do it again, here’s the verbatim quote, better than I could have done anyway:

BridgeHead provides healthcare data management solutions that combine backup and archive into a single platform that it easy for IT to manage.  While you mentioned it’s cool that we can “do business intelligence on a backup”, it’s actually the archive that provides that value. Our archive is able to capture data from a variety of sources (including DICOM data from various PACS), transform that data (dedupe, compress, encrypt, containerize), index the content and make it all searchable. This truly enables the EHR by providing a foundation for managing all the data sources that comprise the electronic health record, regardless of whether that data is actually “owned” by your primary EHR application. Backup complements the solution by providing point-in-time recoverability, and this is just one aspect of our larger disaster recovery/business continuance functionality.

The HIT Policy Committee’s NHIN Workgroup will meet next Wednesday. On the agenda: a review of objectives and NHIN Meaningful Use. The Webcast runs from 10 a.m. to 1 p.m. Eastern.

Lancaster General Hospital (PA) releases data about its use of auto-programmed smart IV pumps, linking them to the Cerner Bridge Medical eMAR/bedside barcode checking system. Their results: nurse IV pump programming time was reduced by 25%, infusion pump programming steps were cut from 17 to seven, and reprogramming was cut by 90%.

In New Zealand, Auckland Hospital’s clinical systems go down hard for four hours when a UPS circuit board fries. Related: the health board spends $1 million for software to track requests for follow-up X-rays after doctors missed a request; 10 patients were overdosed on meds because the automated dispensing cabinets don’t check doses; patient systems at another hospital failed when a roof leak dripped water into a computer; and information entered on the wrong patient caused another patient to be given an unnecessary colonoscopy. For IT noobs, I know this is a splash of cold reality, like that first time you saw your objet d’amour in the dawn’s early without benefit of makeup.

Dennis Quaid, livin’ large on the healthcare conference circuit, announces at his keynote at the ASHP Midyear the National Alert Network for Serious Medication Errors. What caught my eye, however, was the picture below Dennis’s of three hot blondes with violins, apparently holding as much pharmaceutical expertise as Dennis, pre-keynoting fresh from America’s Got Talent … ladies and gentlemen, blond Polish triplets with graduate degrees in fiddlin’!

Someone wanted to hear ideas that would save healthcare $1 billion a year, so here’s mine: stop paying healthcare people to screw around at conferences. If the knowledge is all that important, someone will cover it in a Webinar or journal article (or let everybody pay their own way to go to conferences like I do). I’m pretty sure the salaries, travel costs, and registrations add up to way more than a billion since it seems like half the hospital is junketing somewhere at any given moment and nothing useful ever seems to come of it except the attendees brag to everyone let behind at how enriched their professional lives are since having dinner at Bouchon or cutting up after too many flirtinis at the Donnie & Marie show. Patients, check your drug doses extra carefully this week.

CareFusion announces new Pyxis products at ASHP: drug-lab alerts on MedStation, a PDA-based pre-selection tool for nurses, a maintenance console for all MedStation and SupplyStation systems, and a new version of CII Safe.

From Sandy Claws: “Re: Pam Pure. Do you know where she is and what she is doing? I would look and see if she is doing any work with Francisco Partners or Blueline Partners. My guess she is at least consulting with one of them.” Interesting question, especially in light of the QuadraMed/Francisco deal and the recent hire of two former McKesson bigwigs. Blueline owned, at least at one time, a large number of shares of QuadraMed.

Medicity announces the opening of its platform to third-party application development. Partners developing to Medicity’s iNexx API can leverage Medicity’s customer base of 700 hospitals, 25,000 physician practices, and 250,000 providers.

At its Executive Summit in Las Vegas, Allcripts announces its Professional EHR 9.0 release, as well as Allscripts Remote for BlackBerrys. The 9.0 release includes an enhanced user-interface and expanded disease management capabilities.

CliniComp names Phillip LaJoie, the former CIO of the Naval Medical Center and CTO of the Military Health System’s infrastructure arm, as VP of deployment.

On my Christmas list: smart slippers, like these designed by AT&T scientists that include electronic insoles with four pressure sensors and an accelerometer to measure how well you are walking. I’m not sure exactly what I’d do with them. Perhaps make my departing party guests try them in order to evaluate if they are walking well enough to drive home. AT&T is making major investments in telehealth products. Seems they want to establish a “foothold” in the growing telehealth industry.

Gannett Health Services at Cornell University is now live on Point and Click EHR, which is designed for college health. A staff member calls the transition “incredibly challenging, but invigorating.” 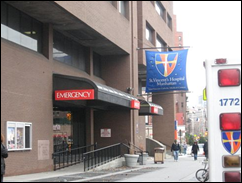 St. Vincent’s Hospital Manhattan lays off 180 of its 3,800 employees to cut costs. The hospital cites “severe financial shortfalls” as a result of the recession and funding cuts. Those affected include managerial and patient care positions. Condolences. There’s never a great time to be laid off, but I’m sure this doesn’t make for a merry holiday season.

Duke University approves a new one-year Masters of Management in Clinical Informatics degree program to be offered by the Fuqua School of Business and the Duke Center for Health Informatics.

No sooner than Charles McCall gets his due then another story of greed in healthcare emerges. The latest scandal comes courtesy of Canopy Financial and co-founder Jeremy Blackburn. Canopy filed for bankruptcy protection after the FBI began looking into alleged fraudulent financial statements that were created as part of a $75 million investment scheme. Blackburn has since resigned as president and his assets have been frozen. KPMG discovered the potential fraud after learning that Canopy was presenting financial reports to prospective investors that were supposedly audited by KPMG. In fact, KPMG had never been retained by Canopy to audit its financials.

If you work in the patient safety, quality of care, or regulatory compliance fields, check out a new social Web site just for you and your peers. Quantros launched the new site called Clinical Cafe.

Two health systems are among five recipients of the 2009 Malcolm Baldrige National Quality Award. AtlantiCare (NJ) and Healthland Health (MO) were both winners in the healthcare category.

Actuaries calculate that West Virginia could save over $1.1 billion by going digital and centralizing patient care. Savings would be seen by the government as well as private insurers and policy holders. The low-hanging fruit includes e-prescribing (estimated savings of $164 million), EMR ($317 million savings), and the creation of medical homes. 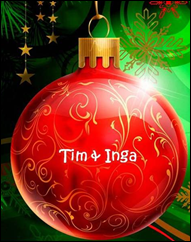 Thanks for the very sweet reader who sent Mr. H and me our own personalized Christmas ornament. I’m glad Mrs. H never reads HIStalk, just in case she happens to be the jealous type.

First, Congress considered taxing cosmetic surgeries. Now they are looking at tanning services. Seriously, what do those folks in Washington have against a little beauty enhancement? Will makeup be next? Or, heaven forbid(!), pumps?