From HITMarqueen: “Re: OR cameras. I’m curious if you have any thoughts on the recent ruling by Rhode Island’s Dept. of Health that requires video cameras be installed in all Rhode Island Hospital operating rooms to monitor patient safety during surgical procedures? This is in addition to a $150K fine for the most recent wrong-site surgery at the hospital.” The state had to do something. Rhode Island Hospital has done five wrong-site surgeries since 2007, most of them really stupid (three wrong-side brain surgeries and the most recent gaffe, operating on the same finger twice instead instead of the two intended fingers — how can you make excuses for that?) Surgeons weren’t marking their sites and time-outs weren’t being done, which sounds like a great reason to revoke their privileges. The state ordered the hospital to assign someone to watch the camera for at least a year, observing every surgery to make sure the marking and time-outing are done (sort of like a football replay official, I guess). They’re darned lucky to be allowed to keep their OR open. Want to bet it’s not just the OR that has problems?

From H. Boc: “Re: Pano Logic devices. HBOC had one of these years ago. Whenever money was nearby, a little hand would come out of the box and snatch it. Then a voice in the box would tell you that the software was going through an upgrade and would be delayed for install.” That must have been a Pathways box. Maybe it handed back a side letter.

From Connie Ripley: “Re: content management. I’m curious to get an idea of how many healthcare or HIT companies are taking Content Management seriously? I see this as an area in dire need of improvement and I can tell you straight from the trenches that it’s not for the faint of heart.” 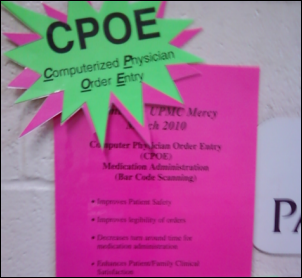 From Mercy, Mercy Me: “Re: parking garage advertisement. This is what attracts doctors to use CPOE.” UPMC Mercy has the right idea since you only have a few areas in which you can get the attention of doctors: the parking lot, the doctor dining room or lounge, and the chart completion area. Once they get them on CPOE, they can add nag screens for subtle messages of propaganda. Or, send them off to re-education camp

From Peter Gunn: “Re: HIMSS. Dang! I was dying to go to HIMSS last year in Chicago, but I live in Atlanta, and now that HIMSS is here in Atlanta, it sounds like it’s not worth going!” I’ll go out on a limb and say that it’s been years since it was worth going if you consider just the official offerings — the self-congratulatory opening session, lame keynotes, mediocre educational programs carefully limited to ensure vendor access to providers in between, having HIMSS-sponsored and ad-filled publications thrust into your face at every turn, and being herded to the exhibit hall like cattle in a slaughterhouse. The best thing about HIMSS is all the non-HIMSS people and events. They haven’t figured out a way to screw that up yet (although the uber-commercial tone threatens to keep providers home, which would then make the conference pointless). You could get most of the value of the conference by not registering at all, just hanging around the public areas of the convention center and attending non-HIMSS events. That would save you only $640 of the total cost, though. There are many things I don’t like about the conference, but I still go.

From Michelle Flaherty: “Re: EHR vendors. QHR will acquire Clinicare, a KLAS winner (Chartcare). Both companies are in Canada. Also, Noteworthy Medical Systems, acquired early this year by CompuGROUP Holding AG of Germany, is sunsetting its non-ASP product.”

From Just Checkin’: “Re: HIMSS shindig. So admittedly we’re not even to Thanksgiving, but given the need to schedule time off way in advance, I gotta get organized. Will the annual shindig take place at HIMSS? If so, is there a date?” I theorize that the beginning of winter gets people thinking about HIMSS, even though it’s a while away (I’ve booked an ultra-cheap hotel already myself and need to pay my $640 registration fee before it jumps to $740 on December 15). I’m still working on details of the reception with the sponsoring company. It is horrifically expensive to put these on — you could have a swanky evening in the best restaurant in Atlanta and still spend a lot less than it costs per person to offer just  a couple of drink and snacks in a private reception. When we first did it in Orlando, I was naive enough to think that we could just buy out some big restaurant and spend $75 per head for an open bar and dinner, but that brings other challenges: which places are available during HIMSS, how many can they hold, how do people get to and from, is it suitable for mingling and having a speaker or two, and how many slots does the sponsoring company want for their own use. It’s also a tough sell to vendors since many of the attendees will be HIStalk readers who work for other vendors. I’m hoping for the usual Monday night, but it’s still up in the air.

Speaking of which, it will be HISsies voting time soon. To prevent the usual ballot box stuffing, only those on the e-mail blast list will be able to vote this year. If you want in, put your e-mail address in the Subscribe to Updates box.

HIE service provider MobileMD gets $4.75 million in a VC funding round led by Health Enterprise Partners.

Athenahealth is awarded a patent for its athenaNet billing rules engine. Shares rose almost 5% Friday after the announcement, closing near their 52-week high. 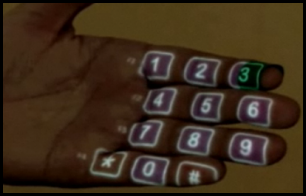 An MIT research assistant creates SixthSense, a combined camera and projector worn around the neck that turns any surface into a screen and input device for smartphones, which he says will allow low literacy citizens of India to use software applications as their gestures are translated into commands. The TEDIndia demo video is amazing. If you’ve seen Minority Report, it will look familiar. Manufacturing costs are estimated at $350. The audience went bonkers, especially when he used his hand as a screen in the picture above.

Here’s my response to the announcement that HIMSS won’t be going back to Chicago because it’s too expensive: duh. Everybody who has every been involved in conference planning is well aware that strong unions, expensive hotels, and rife corruption have made Chicago a terrible place to hold a conference (not to mention that it snows in April, as we now know, although that was a plus to HIMSS because it kept people in the exhibit hall instead of doing something fun). If HIMSS was shocked (no pun intended) by the electrical costs of the most recent conference, then it didn’t do its due diligence and the vendors who had to pay those ridiculous costs ought to be mad. I’ll predict now that exhibitors will be griping after the Lost Wages conference that everybody bailed on the exhibits to go to the casinos and shows.

September’s Harvard Meeting on an HIT Platform (the “HIT should work like an iPhone” meeting) was invitation-only, but they’ve posted videos and an executive summary (warning: PDF). It includes Aneesh Chopra and Todd Park talking about turning NHIN into the “Health Internet”, hoping to make a lot of patient data available around which new applications could be built.

A non-profit hospital paying its CIO over $500K is not clearly excessive, say 64% of survey respondents. New poll to your right: is it OK that HIMSS offers cash payment to conference attendees who attend vendor demos?

The Madison paper covers the construction of Epic’s second campus, with the four buildings now halfway finished and one occupied. It says the company will add another 200 employees this year for a total of 3,400, including a Netherlands office with 35.

Speaking of Epic, this comment from a David Blumenthal e-mail (that I get, for some reason) seems to be a shot at MyChart and Epic’s other data sharing programs that work only for Epic-using hospitals: “… we cannot support arrangements that restrict the secure, private exchange of information required for patient care across provider or network boundaries.” Glen Tullman was also talking apparently talking about Epic (since he’s made similar comments elsewhere that named them specifically) in my interview with him this week:

I had a question I would have asked had we not been running short on time: “Wouldn’t Allscripts do the same thing if it had the same chance as Epic?” Not for unsavory reasons, but because having big market share in an area provides some fast, cheap interoperability opportunities that are great for patients in those areas, even if they don’t tie into whatever regional or national networks that are being considered.

Exempla Lutheran Medical Center (CO) goes live with its Epic EMR. The three-hospital cost: $85 million, plus another $4 million for its physician practice.

Tampa-based Tech Data forms a healthcare business. Stimulus dollars may not be doing much good for unemployment, but they’re bringing a lot of companies into healthcare that weren’t interested until the taxpayer money chummed the waters. All I’ll say to the prospects they’ll try to convince of their newfound interest: lots of companies got out of healthcare just as fast as they got into it when the expected profits didn’t materialize. It’s not like we’re a new industry.

The ACG Boston 2009 Fall Conference & Private Company Showcase is this week in Boston. Speakers: John Halamka (of course), Todd Cozzens of Picis, and Carl Byers of athenahealth. Cost to attend the 3.5 hour conference – $330.

A doctor in China loses his job and his license after investigators checked computer records and verified that he was playing online computer games at work while a five-month-old baby he was supposed to be monitoring died.

Apple files a patent for its long-rumored tablet PC. 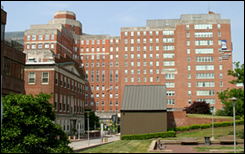 University of Maryland Medical System will float a $250 million bond sale, with a portion of the proceeds to be spent on clinical systems.

Merge Healthcare will sell $27 million worth of new shares to pay off debt. Shares are worth eight times what they were a year ago, but still barely more than 10% of what they sold for three years ago. It also has expanded its offerings in China.