From Lizzie Borden: “Re: University of Rochester. I hear they just signed with Epic systems for their EMR solution. What are they installing and are they hiring? Interestingly, I also know that Buffalo Medical Group has acted proactively and offered their Epic analysts a $$ incentive to stay with them instead of fleeing to U of R.” URMC’s Web site says Epic says contract negotiations “were finalized in September 2009.” It also says that they’ve had to scale the $49 million project back, but still hope to nab $8 million of taxpayer ARRA money. It’s the full-blown inpatient system, apparently, expected to go live in the fall of 2011. Details here.

From Topper Harley: “Re: trial. Not too nice of the doctor!” An HIT company executive goes on trial this week, facing multiple felony charges for an alleged road rage incident. I initially did a detailed write-up complete with links and accident scene photos, but I reconsidered for several reasons: (a) he’s been charged, but not found guilty, which means he’s innocent; (b) he is an HIStalk reader and I’ve swapped e-mails with him in the past, so it would be needlessly painful for him to read the story here and know that his peers are doing the same; (c) I could easily wreck his career unintentionally just by giving the unproven details a spotlight. If and when he’s found guilty of something major, I’ll provide details. Until then, I’ll express non-specific sympathy for all involved and my hope that justice prevails.

From Luke O’Scyte: “Re: Ontario. It is called a learning opportunity, or perhaps a teachable moment, how not to spend one billion dollars. The Ontario government, through arrogance and folly, decided that they new best how to pick the market winners, run their own networks, decide on which technologies to approve and which to ignore. So how did that work out for them? See the auditor’s report (warning: PDF).” It’s full of juicy details, like that eHealth Ontario’s CEO paid a recruiter $1 million upfront to fill 15 management positions; one successful contractor’s bid was five times more than a comparable one and more than quadruple the budgeted amount; and $800 million of the $1 billion spent to date was for a private network that “remains significantly underutilized because as yet there is insufficient health-related information on it.” in other words, they jumped all over their equivalent of NHIN without first getting provider EMRs up and running to populate it.

UCSF finally confirms what I reported in August as a rumor (supported by a reader-forwarded copy of an internal department e-mail): UCSF has halted (temporarily, at least) its $50 million GE Centricity project. You’d never know there was trouble in paradise if you Google UCSF+Centricity: the rags and press releases were making it sound like a match made in heaven. Thanks to SF Business Times Chris Rauber for giving HIStalk and rumor reporter UCSFWatch credit.

Here’s the next gossipy tidbit provided to me by one of those UCSF rumor reporters: as soon as UCSF’s lawyers get them out of their GE contract, they’re going with Epic. Unverified.

Cisco takes its Vision Van (or whatever you call a demo trailer) to Auburn Memorial Hospital (NY), showing off technologies such as videoconferencing and mobile caregiver communication.

Eclipsys announces scheduled events for its EUN conference in Dallas next week. ARRA’s on the list, not too shockingly, along with the customer knowledge sharing tool Eclipsys Outcomes Toolkits and physician sessions on its PeakPractice ambulatory EHR. 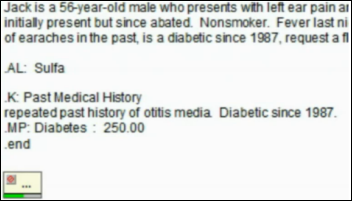 McKesson announces that all of its physician EMRs can now use Bright Note Technology. I didn’t really understand from the press release what it does, exactly, but it’s some kind of multiple input/single search capability for patient data. I found this demo on YouTube, showing a doctor using speech recognition to dictate a single SOAP note that parses out the information into specific chart data elements.

Inga’s update from MGMA today is on HIStalk Practice.

A summer intern (Harvard-graduated lawyer, Stanford PhD candidate) at IBM Research comes up with an encryption breakthrough that may have great potential for protecting health information, especially with cloud computing. Homomorphic encryption, formerly viewed as impossible by cryptographers because it takes a lot of computing horsepower, allows running calculations on encrypted data without actually decrypting it. IBM hired him, of course.

Weird News Andy characterizes this story as both weird and sad. An 31-year-old English veteran of the war in Iraq dies after receiving cancerous lungs transplanted from a donor who had been a heavy smoker. The tumor wasn’t discovered until months after the transplant, during which time its growth accelerated, fueled by the routine post-transplant immunosuppressive drugs the patient was taking. The delay in noticing the tumor was blamed on poor communication among the radiologists and doctors involved. The cancerous lung made him ineligible for a second transplant since, under hospital rules, he had become a cancer patient.

RelayHealth announces that 50 health systems and hospitals have contracted to join its RelayHealth Network, which connects 20,000 doctors, 90% of retail pharmacies, and 52 reference labs, all of which automatically update 7.6 million shareable personal health records for HIE connectivity and care coordination. We may need to talk to a participating site since that sounds pretty interesting. 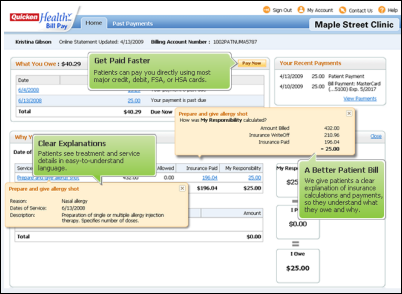 Allscripts announces that it’s the first EMR vendor to integrate its systems with Intuit’s Quicken Health Bill Pay, which gives patients an easily understood statement and the ability to pay online. Doctors get paid 18 days faster on average. Everybody seems to like the Quicken app, which I first wrote about in early 2006 and talked up as potentially a big deal, although it seemed to take a long time to see the light of day.

Also announced: Allscripts will offer its practice customers point-of-care patient payments via mPay Gateway, which calculates patient responsibility and obtains payment authorization before the patient leaves the office. Inga interviewed mPay Gateway CEO Brian Beutner just last week on HIStalk Practice. We asked him the obvious question – are patients really willing to pay before leaving the office? He says 90% of them will. “They like the fact that there are no more unpleasant surprises and the simplicity of taking care of the payment up front, rather than having to wade through numerous statements from the doctor and comparing them to the multiple EOBs and other confusing insurance documents.”

Check out TPD’s list of iPhone applications for healthcare. If you know of others, leave a comment on that article and he will expand his list. Thanks to TPD for putting the list together and for his ongoing contributions to HIStalk.

Dave Roberts, the VP of government relations for HIMSS and former mayor of Solana Beach, CA is running for Congress. 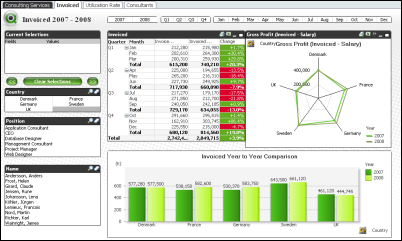 A reader e-mailed to ask if I’d heard of QlikView, with which she was impressed in using it on a consulting project. I hadn’t, so I Googled. It’s a very cool BI tool (check the online demos) and supposedly the fastest growing BI company in the world (which probably means Oracle, IBM, or Microsoft will be buying them next week, unfortunately). I noticed that Bassett Healthcare was listed as one of its healthcare customers, so I Googled yet again to find that apparently Surgical information Systems uses it for its SIS Analytics offering (PDF case study here).

The VA awards a claims processing contract worth up to $60 million to VistA integrator Document Storage Systems.

Cedars-Sinai admits that it overdosed 206 CT scan patients with eight times the intended dose of radiation because of  “a misunderstanding about an embedded default setting applied by the machine.”

Dell, fresh off its Perot buy, will be looking for more healthcare acquisitions, says Michael Dell.

UVA Medical Center confirms that it will implement Epic, which I speculated in February (I’m not psychic – if a hospital has more than 400 beds, I always guess Epic and I’m usually right). UVA was the hospital that got a lot of press (some of it snarky) recently when it said it would hire scribes instead of repurposing busy doctors, so now we know which EMR they’ll be typing into.

University of Central Florida gets preliminary HHS approval to start a health technology regional extension center and apply for $8 million in stimulus money.

An Oklahoma hospice owner fears that reimbursement cuts and government-encouraged EMRs will drive him out of business. “One of the things they talk about is electronic medical records, which has great applications for medical doctors’ offices, but for hospices, that doesn’t help us at all.”

Philips posts surprisingly good Q3 numbers, with an expected loss of $66 million actually turning into a $258 million profit. Healthcare margins dropped to 9.6% and sales were down 4%, however.

You would think PHR vendor MyMedicalRecords is a huge enterprise given endless press releases and PR efforts. Not so: the quarterly revenue of its money-losing parent company was $221K.

Virginia Tech gets a $28 million NIH grant for infectious disease research at its Virginia Bioinformatics Institute.