The Association of Medical Directors of Information Systems (AMDIS) files its response (warning: PDF) to ONCHIT’s proposal for the definition of “meaningful use.” Its recommendations:

Publicity-seeking missile Jesse Jackson, apparently fantasizing that he was there with Jackie, Tito, Jermaine, Marlon, and Michael as one of the Jackson 6, has insinuated himself into the limelight yet again, this time to dramatically repeat the obvious: the cardiologist who was in Michael Jackson’s house when he died needs to be found and interviewed (duh, Jesse). I’ve already made a bet at work that toxicology results will find at least one each of a narcotic, antidepressant, and stimulant, but the gossip sites say it will be more like a broader, Elvis-type blood-borne pharmacy since MJ was strongly rumored to have been a Demerol and Oxycontin addict in the past and, like a lot of celebs, had found himself some Dr. Nick-like docs willing to write anything he wanted even if it was likely to harm him (a Beverly Hills pharmacy sued him in 2007 for over $100K (!!) in unpaid prescription bills). Like former father-in-law, like son-in-law, sadly. Surely the tabloids are floating around offers to buy illegal copies of his medical records.

The final results of the HIStalk poll on HHS’s meaningful use draft: 20% think providers will achieve it too easily, 42% think the criteria are too hard, and 38% say they are about right. New poll to your right: do you think, as the technology journal article insinuated, that doctors and hospitals have intentionally resisted computerization to keep the public aware of how profitable their businesses are?

Also to your right, in Beta mode to see how many of you enjoy nerd humor like me: Dilbert. You can see the current strip, but also click the date link at the top to pop up a calendar and choose any date going back to 1989 or so (to the Phil, Prince of Insufficient Light days). My favorite is anything with Dogbert Consulting Company.

Justen Deal already told you this a couple of weeks back, but a new Canada Health Infoway report confirms: after eight years and $1.6 billion spent, EMRs contain information on only 17% of Canadians, far short of its 50% goal. Given its apparently failure to deliver what was promised, the organization’s response was: (a) we still might make it by the end of 2010, and (b) what the heck, it’s creating a bunch of HIT jobs, anyway. I guess our countries really are a lot alike. I was interested in the CEO’s educational background, but it’s never mentioned in his bio, which seems odd.

Cerner shares closed at $61.59 on Friday after hitting an all-time high, valuing the company at $5 billion and Neal Patterson’s shares at $344 million. Had you bought $10,000 worth of CERN in 1990, those shares would be worth $1.5 million today, for all us Neal-bashing losers (see stock chart above covering 1990 to now, with CERN in the blue and the Down in the red, no pun intended). Allscripts hit a yearly high Thursday and closed Friday at $14.74, but still way short of 2000 prices that were in the 80s. CEO Glen Tullman, predicting company growth, tells Jim Cramer, “we’re just getting started.” McKesson is in the 40s, way off its pre-HBOC prices in the 90s in 1998 despite paying massive CEO dollars. 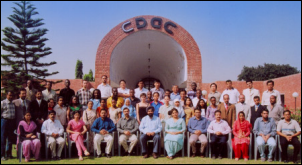 India’s national e-governance project will roll out Web-based telemedicine software called e-Sanjeevani, a .NET-based solution that’s claimed to be “the world-wide leading provider of connected medical devices or medical equipments, peripherals, and software used in telemedicine.” e-Sanjeevani was developed by CDAC Mohali, an ISO-9001:2000 certified R&D institute. I like its goals, which include “To provide multi specialty health care to the common man at the most affordable cost.” Maybe we should use it here to connect to specialists in India since our common man can’t afford it either.

New York State Senator Pedro Espada owes the state and the IRS hundreds of thousands of dollars from the operations of his medical clinic/medical home, which gets funding from the state health department. The clinic paid the Senator $460K last year, but omitted that payment from its IRS filings. The clinic says it was promised $200K to convert to an EMR, but has received only half that amount. The Senator has been in hot water before, claiming a vacant apartment as his district residence and charged (but acquitted) of using clinic money to pay off his campaign debts.

China will restrict viewing of Internet-based medical research papers about sex starting next month, another step in a series of crackdowns that include requiring new PCs to have filtering software and requiring Google to block politically sensitive results from its searches. Medical information sites will be required to implement technology that will restrict sex-related medical research papers to medical professionals.

I’m torn: Microsoft is selling its Windows 7 Home Premium upgrade for $49.99 for a couple of weeks, temporarily discounted from its insane list price of $120 (Apple’s Snow Leopard will be only $29 and $49 for a five-license family pack, plus their stuff seems to be much less trouble–prone). Reasons against: (a) I have no unmet operating system needs since XP works fine for what I need, which is mostly to use Firefox to get to Google Apps and Gmail; (b) my Vista upgrade was a disaster, with all kinds of flaky behavior and lack of device support, (c) installing it requires a complete reinstallation of everything on the drive; and (d) I keep thinking of that Office 2007 ribbon bar, surely the stupidest and worst-designed software “feature” in recent memory, and wonder what similarly unpleasant surprises might have been tucked into Windows 7. I could load the release candidate version, but it’s just as risky in all those same ways except financially.

Speaking of Apple, I found its site for medicine and clinical practice. It’s a pretty short list of Mac-based EMRs, though, and I’d hope doctors wouldn’t choose a system just because it runs on a Mac. From the screenshots I’ve seen of some of those systems, they’re not much different from the hundreds of Windows-based apps out there.

Thieves in Canada who stole a truckload of computer monitors that a local hospital was donating to impoverished schools in Africa return them after finding out where they had been headed, attaching a note saying “sorry for the trouble, hope you forgive us, hope those kinds in Africa enjoy.”

Great news! Frugal politicians say they can try to fix healthcare for only $1 trillion. Let’s hope the government doesn’t run out of currency-printing green ink before it all turns to budget-busting red ink.

Jeff Amrein, who sold Advanced Imaging Concepts to Allscripts in 2003, moves on to his next venture: an online poker site called Hog Wild Poker Leagues. I thought the whole poker thing was as passe as swing music and pacifier-sucking teenagers, but maybe not.

Imaging vendor Merge Healthcare is added to the Russell 3000. Shares have been on a tear, jumping from around 40 cents in December to $4.30 now following major restructuring and a new private investment a year ago. Timing is everything, though: the share price was at nearly $30 in early 2006.

Odd hospital lawsuit: a heart surgery nurse sues her hospital employer, claiming she was demoted for complaining that a surgeon threw a 4-by-6 inch hunk of heart tissue at her during an operation and joked about it. His humorous line wasn’t mentioned, but I pictured him belting out Janis Joplin’s Piece of My Heart.

The surgeon general under the first President George Bush, who is now (but probably not for long) a VP of Florida Hospital in Orlando, pleads guilty of labor charges at her former New York health commissioner. She forced state employees to work overtime doing tasks such as having security guards move furnishings in her house and publicly chewing out state guards for mishandling her personal shopping bags. The inspector general’s report sand she added “new dimension to the definition of ‘arrogance’ and ‘chutzpah’." She’s also the sister-in-law of Father Guido Sarducci for you old school Saturday Night Live fans.