From The PACS Designer: “Re: NASA’s Nebula. NASA has entered the cloud computing on ramp to apply the concept to its space travel activities. Their venture into cloud computing is called Nebula.” I took a look at the Nebula services chart ad didn’t understand anything on it other than MySQL, but I’m no rocket scientist.

From WhiteSoxFan: “Re: International MUSE. Has anyone heard anything about attendance, vendors, presentations?”

Carl Byers, CFO of athenahealth, will resign early next year to move overseas, the company announced today. Board member and former IDX CFO John Kane will lead a search committee to replace him. Finance VP Dawn Griffiths will be promoted to chief accounting officer and treasurer on July 1.

Debuting on the Healthcare Informatics 100: HIStalk Platinum sponsor Cumberland Consulting Group. The company was also named by Consulting Magazine as one of its “Seven Small Jewels 2009: The Hidden Gems of the Profession” of niche firms making a big impact. They interviewed managing partner Jim Lewis.

Herb Conaway, Jr., a private practice physician, attorney, and Democratic assemblyman from New Jersey, introduces a bill that would make it illegal to sell or use non-CCHIT certified systems in the state. He previously introduced the New Jersey Health Information Technology Promotion Act that appears to mandate EMR use. HIMSS loves him, of course, having given him a 2008 State Advocacy Award and put him on the podium at the annual conference in Chicago. I found it interesting that his own practice’s EMR vendor went belly-up, maybe leading him to favor the larger vendors that can afford CCHIT certification fees and who wouldn’t mind seeing a bunch of competitors knocked out of the arena for one reason or another. Thanks to HIStalk reader Chip for the tip.I thought I was getting used to well-intentioned government intrusion into private business, but this idea leaves me speechless.

Sensible Certification, on the other hand, is trying to rally support to scale back grand certification ideas. I was skeptical until I read its six suggestions, of which I agree with every one: (1) stop the rush to certification; (2) don’t define requirements until ‘meaningful use’ is defined; (3) certify only basic capabilities, such as data sharing; (4) use NIST’s Laika as the certification requirement; (5) don’t certify functionality because the market should decide that; and (6) certification CCHIT-style will stifle innovation. They’re petitioning David Blumenthal at ONCHIT. The site doesn’t say who’s responsible, but it’s registered to Gordon Moore, MD, a family doctor who left a salaried job and struck out in a low-overhead practice.

I’m not interested enough to sort this out, but two New Zealand medical systems vendors are threatening each other over something or other, one of them and EMR company with 90% market share who supposedly won’t make patient information available outside its systems without being paid. 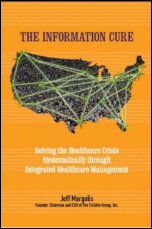 TriZetto founder, chairman, and CEO Jeff Margolis publishes a book called The Information Cure: Solving the Healthcare Crisis Systematically Through Integrated Healthcare Management. It’s aimed at consumers willing to pay $25 to read about a technology vendor guy’s ideas on fixing healthcare, so I’m sure Jeff will be keeping that day job. Not that it isn’t interesting, but Americans don’t read books, especially non-fiction ones that require thinking. There’s just no time with all that reality TV to watch. If anyone wants to review it, jump right in. Amazon doesn’t have it yet, but Jeff was signing copies at AHIP this week.

CBC isn’t done with eHealth Ontario, following up its early article with reports that the CEO has connections to uncontested contract winners Courtyard Group and Accenture.

Want e-mail updates when I write something new? Join 4,317 folks who get the news first by putting your e-mail in the Subscribe to Updates box to your right. Below that is the Search function, courtesy of Google, that digs through six years (as of this week) of HIStalk to find whatever you’re looking for. The hideous green rectangle below that is the Rumor Report button, clicking of which allows you to directly and anonymously send stuff to me without fooling around with e-mail (even an attachment, if you like, with highly personal photos and revelations always appreciated). The calendar is getting some action, I see, and I should take a moment to thank the guest authors here and on HIStalk Practice for sharing with us all.

OK, you Apple zealots who are always e-mailing me finally convinced me. I’m buying a Macbook for a family member. The tipping point, beyond the obvious non-Microsoft hip appeal: Apple is offering a newly upgraded white Macbook for $949 (after an educational discount) and they’re throwing in a free $229 8 gB iPod Touch as a back-to-school special. Sold to the abrasive blogger for the equivalent of $720, not much more than I was figuring on spending for the usual generic HP or Dell laptop. All I need now is a black turtleneck and tattooed chick.

A Computer Weekly article says London NHS will pay BT more than $800 million in extra costs after the company renegotiated its contracts with the threat of pulling out like Accenture and Fujitsu did before it. In BT’s defense, however, it had already written down billions in losses, an unspecified amount of which was due to lowball NHS contracts. There’s probably a good lesson in there: Richard Granger did admirable work in stretching a dollar (pound, in his case) until the eagle squalled (as we country folk say on occasion), but having unhappy and money-losing vendors isn’t a formula for success. I thought he did a super job with some aggressive contracting, but the results don’t exactly bear that out. 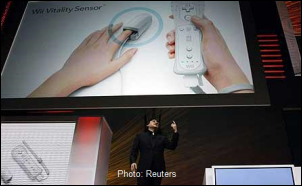 Nintendo announces the Wii Vitality Sensor, a finger-attached controller that measures stress. It won’t be out until next year. Nobody mandated its development, it isn’t certified, and you spend your own money on it, just in case you remember those days.

iMedicor announces a portal (it seems to be free) that it says will allow providers to exchange medical records. It has a doctor registry and utilities to export EHR documents and exchange Continuity of Care Record files.

Greek authorities put the wife and daughter of a former Siemens executive in jail, charging them with complicity in the money laundering and bribery case that sent the man fleeing as a wanted fugitive.

An Indonesian woman who complained about her hospital treatment is jailed on criminal defamation charges that could result in six years in prison. She e-mailed friends claiming the hospital falsified lab results to justify additional treatments. She already lost a civil suit that cost her $6,000 and a public apology. The Radio Australia news item calls Indonesia’s defamation laws “draconian”.

HHS cites a chemical dependency unit for HIPAA violations, saying the program director allowed her “significant other” to hang around patients and the nursing station. That means she’s in DePoo, which happens to be the name of the place.

Hospital lawsuit: a North Carolina hospital is sued by the Equal Opportunity Commission for not hiring people who are taking prescribed narcotics.

From Bill Williams: “Re: The Pipe. I’ve long had a question in my mind that I’ll ask here: why would a doctor/healthcare provider be depicted smoking? Has anyone ever asked the question before?” As a matter of fact, the question has come up many times. Mr. H claims it is intentional irony since the doctor in the logo is in the 50s style (note the head mirror) when many doctors smoked. Check out this commercial for proof.

The national healthcare alliance VHA signs a multi-agreement with RemitDATA, Inc. for its Reimbursement PRO and WebScan PRO RCM products.

A power surge knocks out the computer system at Clarian Health (IN) Monday afternoon, forcing its hospitals to hand write records. By 1:00 a.m. Tuesday, Methodist Hospital and Indiana University Hospital were so backlogged with paperwork that they went on ED diversion. The computer system was fully restored by 7:00 a.m. As Kevin says, “If you want more of a smart-assed IT perspective, check out the comments on the Slashdot story here.”

Medsphere says it has raised almost $2 million of its targeted $15 million secondary venture round. Michael J. Doyle, Medsphere’s CEO and president, just received the Sister Fedde Award from Lutheran Healthcare (NY), recognizing his contribution to the health of area residents. You probably already guessed that Lutheran is currently installing OpenVista.

More hospital layoffs: 77 from Greenwich Hospital (CT) and 245 from The University of Alabama at Birmingham Health Systems, though 81 of the Alabama workers are being shifted into jobs now held by contractors. In addition, The University of Iowa Hospital must cut $45 million from its budget by June 30, 2010, which will likely result in an unspecified number of layoffs.

Walgreens teams up with HealthVault, allowing its pharmacy patients to access their prescription records through the online PHR. Patients will also be able to share the online information with their physicians.

According Harvard Business School researchers, male Twitter users have 15% more followers than women and the average man is twice more likely to follow another man than a woman. And, the average woman is 25% more likely to follow a man than a woman. Ergo, Twitter promotes sexism. (I was going to go into my detailed analysis of why Mr. H has more Twitter followers than me, even though I follow more people and Tweet more often. However, I think I’ll just blame society as a whole.)

Longtime sponsor EnovateIT sent us this note: “Exciting times for us. What you see is short term, next week we unveil. You’re the first to know publicly.” We like getting the scoop, even if we don’t know what it means. What we do know is that Enovate, which specializes in wireless mobile computer systems integration, just rolled out this micro-site and promise to tell us more next week. Theories welcome.

The weather in San Diego is in the 60s as I type, which is surely more refreshing than most parts of the country. And if you are in San Diego at AHIP, fill us in on the buzz, including what happened during the protests scheduled for Thursday morning against the health insurance industry. Also take a moment to say hello to the HIStalk sponsors that are exhibiting, including Allscripts, 3M, and RelayHealth.

The Queen’s Medical Center pays $2.5 million to settle two whistleblower lawsuits. The suits allege that over a three-year period, the hospital overbilled and submitted false claims to Medicare, Medicaid, and TRICARE.

Sweden rolls out the first stage of its national EHR called National Patient Overview. Over 500 clinicians are now accessing patient records that are hosted by InterSystems Healthcare information exchange platform.