From Tyrone C. Earl: "Re: Pyxis. 800 people laid off today. The regional manager came in today to tell us that one of the people was our PM for our go-live this week (nice timing). He said we had to wait two hours before we told anyone." The company just announced that it will eliminate 1,300 jobs when it spins off CareFusion. The announcement mentioned 800 layoffs, so maybe that’s not a coincidence.

From Eclipsys Layoffs, aka A Passage to India: "Re: Layoffs. Once again the ‘leadership’ at Eclipsys has cut 100 (give or take) positions. So what exactly have Eclipsys stockholders gotten from Andy’s multi-million dollar leadership team? Lower stock price, fewer sales, and an employee base that’s being slowly exported to India." Unverified, although someone I know got the axe and also gave the 100 number, mostly from development, and also said that development SVP Joe Petro resigned (but he’s still on the Web page, so I’m not sure about that). I would blame the economy more than the company.

From Alexander B. Fitzhugh: "Re: BearingPoint. Healthcare consulting (which consists of the Federal, Provider and Payor practices) is part of the Public Services business unit. The information in the link you provided is correct, Deloitte intends to buy PS. According to Kelvin Womack (VP and sector lead for Healthcare), almost all employees within Healthcare are going to move over to Deloitte."

From Anony: "Re: GE. Harrison Hospital (Bremerton, WA) selects GE Centricity for its 25 hospital physicians. Also purchased were 100 licenses for a community Stark offering and GE’s Health Information Exchange (HIE). Expect a press release in the next week."

From Kat & Mouse: "Re: McKesson layoffs. A good source states the layoff was around 600. The source was one of them, given severance and time to find new job. Source stated that McK had over-expanded last year – nothing to do with issues related to the stimulus." Unverified.

From Yancy Derringer: "Re: KPIT. Insiders say 400 more will be let go in June. The IBM announcement was rumored the day the new CIO came to KP because he did the same thing in his last two jobs (both outside healthcare) and the new VP he hired did the same." Props to Dr. Mark Craig, who rumor reported to me in October 2007, "The prevalent rumor is that the new CIO and his new hires are on an outsourcing train and the train is powered by IBM.”

From New York Cynic: "Re: move. Lori Evans, 39, rising Health IT star Deputy Commissioner 4 NY Office of Health Information Technology Transformation has left after only 2 years and is positioning herself for her next move. Although she was anticipated to be CEO of the National eHealth Collaborative, this has been put on hold as the role of NeHC is in question under the stimulus plans policy committee. Her connections to the previous administration (Brailer) precludes any position with the current administration or ONC but watch for some serious re-branding to occur."

From People Love to Gamble: "Re: prize. What prize will you be giving to the 2 millionth visitor to the site? ;-)" I like the idea, but there’s no way to identify who the visitor is. And, it looks like I’m out of time to think about it since the magic number will be reached sometime Wednesday or Thursday at the usual rate. It’s a good time for me to thank the people who read and sponsor HIStalk. I remember with total clarity when I was thrilled to look at the e-mail list and see 31 subscribers (now at 4,000) and to see that long-awaited first thousand page views (now at over 3 million). I’m just as thrilled and surprised now.

If you RSVPed and are coming to the reception Monday, we’ll probably start our little program at around 7:45 or so (the event runs 7 until 9). We’re playing it by ear, but I was thinking that leaving some networking time afterward would be fun since we may recognize a few people from the podium that you’ll want to chat with. And if you have signed up, please make sure to respond the confirming e-mail from Ingenix since we’ve got waitlisted people who would be happy to take your spot if you can’t make it after all. I’m heading out to Chicago early, so I will report from there starting Saturday evening, enjoying the snow and freezing (not).

Speaking of HIMSS, here’s our list of who you should see in the exhibit hall, those sponsors who keep the presses pressing right here. These are the cool people. Want a nice, printer-ready copy perfectly formatted for taking along? Here you go. Tell them thanks for sponsoring HIStalk, will you?

Among those companies making the short list to provide a new national pathology system for Wales: Cerner and InterSystems.

Over on HIStalk Practice, we did an "HIT Moment with …" Michael Stearns, president and CEO of e-MDs.

A nice piece on Cleveland Clinic’s HealthVault pilot, highlighting one hypertensive patient’s experience. Says a doctor there: "We’ve not been connecting as well as we should have. I think this is where the future is."

Nicholas Casabona is promoted to CIO of Winthrop-University Hospital (NY). 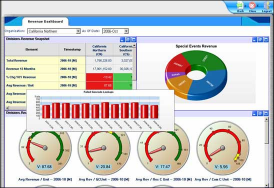 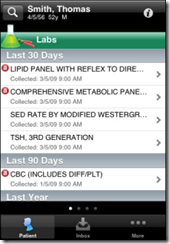 Quest Diagnostics is quietly releasing a free iPhone application that will run the Care360 physician portal of its subsidiary, MedPlus.

From Clueless: "Re: What to wear? Inga – can you advise re: dress code at the HIStalk/Ingenix soiree?" Good question. As Mr. H babbles on about recommends which education sessions to attend, I am glad that someone has the good sense to be asking the important questions. So, always start with the shoes. The weather on Monday is currently forecast for a high of 39 degrees and rainy, with snow and freezing weather by the evening. Clearly not conducive to high-heeled stilettos, which would be the preferred footwear for such a festive occasion. Unless you are staying at the Trump Hotel and simply taking an elevator to the party, such shoes will be a challenge. If you bring a large purse, you could always change out of your ugly shoes and into elegant footwear once you arrive at the hotel. But, gentle reader, I will let you figure that out those logistics. Once you settle on shoes, nothing else really matters. However, I will say that last year we had everything from lovely cocktail dresses and suits to those just-off-the-exhibit-floor khakis with tacky golf shirts that shout the name of one’s employer and are ill-fitting on 90% of all wearers. Don’t worry if you are appropriately dressed. We really just want you to have fun and say very loudly how much you love Mr. H and Inga.

From Confused: "Re: Pink pants at HIMSS….Is this going too overboard? We want to stand out, but I think this might be pushing it. Currently we plan on wearing black t-shirts with the following logo and khaki pants. Your feedback is greatly appreciated." After suggesting to Confused that only real men can wear pink, Confused said that was enough of a challenge to his team’s collective manhood that they decided the pants were a go. I’m hoping they’ll show off the fancy pants at our HIStalk/Ingenix gathering.

From Pacstech: "Re: RealAge Response. Thought this might interest you. I thought the same thing as New York Cynic after taking their ‘survey,’ carefully opting out of any offers (many) to have them send me health related info." Pacstech forwarded us a copy of a note he received from the RealAge people, who claim the information people provide "is never shared" with advertisers or anyone else, though if you opt for e-mail offers, you will get links from advertisers. I asked privacy rights advocate Dr. Deb Peel for her take on the note and here was her response: "The most important point is how can we trust them or any other health-related website? They all say they never do anything wrong, but where is there any objective evidence, proof of what they say, or certification by an independent outside consumer-led certification organization?  No trust without verification. Those who handle Americans’ sensitive personal data all promise great things but when it comes to our MOST sensitive personal information (health information) we need verification. (We are trying to launch our privacy certification later this year.)" All I can say is that I took the RealAge test a few months ago and was pleased how it so accurately shaved several years off of my not-real age.

The ever-humble Mr. H hasn’t mentioned this recently, but it looks like HIStalk will hit the 2,000,000 visitor milestone by the end of the week. Mr. H is the genius behind HIStalk, so if you are a fan, send him a congrats, kudos, felicitations, or a thatta  boy. And thanks for reading.

British doctors find that using maggots to treat leg ulcers is just as effective as using gel. Both are similar in cost, but the maggot alternative is a viable option for remote areas without access to good medical care. Unfortunately, the maggot treatment is more painful. Ick.

An engaged front-line team, supported by an electronic health record and a clinical care registry, is credited with reducing the deaths of patients with coronary health disease by 73 percent, according to the results of a Colorado program piloted by Kaiser Permanente. The pilot care program linked pharmacists, nurses, primary care physicians, and cardiologists and included such tactics as proactive patient outreach, education, lifestyle adjustments and effective medication management.

Streamline Health Solutions announces that a "leading West Coast university-affiliated surgery department" will implement its enterprise document management and workflow solutions. The "unnamed" university is easy to identify if you view the link to the press announcement. This is the second time we’ve noticed Streamline declining to name their client in the actual release, but revealing it in the link. Perhaps they are intentionally revealing the client’s identify in this subtle way so people like me can feel like a smarty-pants.

Kaiser fires 15 hospital workers and disciplines another eight for peaking at octomom Nadya Suleman’s medical records. Suleman’s attorney suspects the employees were trying to find information on the sperm donor.

After paying contractors billions to create the DoD’s AHLTA military EMR system, officials introduce a plan to re-shape the system. The new strategy seeks to improve provider satisfaction, improve reliability, and strengthen data sharing throughout the DOD and the VA.