From Smells Like Teen CCHIT: "Re: did you get wind of this already? I don’t remember hearing about it on HIStalk yet but I could be wrong! It gets less juicier as you read, but leaves at least one major issue open for interpretation." Link. Don’t get too excited – nearly every point in the "very troubling post" is wrong, starting with the first paragraph (HBOC is indeed the former HBO & Company). CCHIT was dissolved, but only to change its organization type. CCHIT is still a private, non-profit organization and it’s entirely irrelevant as to which state it’s incorporated in since you don’t have to incorporate in the state in which you operate (surely everyone’s heard of the huge number of Delaware and Nevada corporations out there). Conflicts of interest with HIMSS? Obviously – HIMSS, AHIMA, and NAHIT founded it in 2004, so clearly they share an agenda and aren’t exactly secretive about that fact. Mark Leavitt of CCHIT used to work for HIMSS, but left to take the CCHIT job. CCHIT has paid staff, but most of the work is done by volunteer commissioners. CCHIT’s criteria are publicly vetted and open for anyone to see, so it’s not like they’re doing some kind of beauty pageant judging with no oversight. I could go on, but clearly it’s a waste of time — someone with an axe to grind decided to air their prolific ignorance or denial of the facts publicly. The legitimate gripes about CCHIT are its fees (but it is a self-supporting nonprofit), its existence (but Brailer sold the world on CCHIT-certified EHRs for interoperability reasons even though most of the CCHIT criteria have nothing to do with interoperability), and its failure to get its stated job done (reducing EMR purchase risk of doctors to move the adoption needle).

I’m not going to dwell on this, but suffice it to say the folks at MEDHOST dealt professionally with the issue I mentioned previously involving comments sent to me regarding a competitor. I appreciate their support.

The stimulus bill is signed, so right or wrong, it’s happening. I have to commend Allscripts for being on the ball – they had a new ad (to your left) to me almost immediately that links to a resource page for providers. We’ll stay in touch with our EMR vendor contacts since it will be interesting to see how the stimulus actually gets operationalized and what providers do.

And now that we’re getting stimulated, may I offer a brief criticism of Saint Obama on the day he signed the stimulus bill and yet the Dow dropped another 300? Enough of the gloom and doom predictions of just how bad the economy is and how long it will take to recover. We’ve got the pessimism angle covered, thanks. You’re supposed to inspire us with your energetic optimism, which is why people vote for big-picture vision-painters and not analytical realists. Take it from Ronald Reagan: the economy will recover when people believe it can. It’s your job to convince them. Thank you.

Least-shocking news of the day: the Electronic Health Records Association and HIMSS support spending taxpayer billions on their wares, reminding everyone that broad, noble-sounding causes always mean someone makes bunches of money.

Hong Kong’s hospital authority will spend $130 million over 10 years on a national e-health project, linking to the free physician EMR being developed by the Hong Kong Medical Association at government expense.

Modern Healthcare gives its latest round of awards to big-salary hospital CEOs who have spent a lot on healthcare IT. Other than making the healthcare IT vendor advertisers happy and encouraging consumption of their products, I don’t understand why buying IT merits an award. First, their IT projects were presumably for their own organization’s benefit, not to get an award from an ad-supported magazine. Second, there were only 48 nominees for three awards, so obviously hospitals aren’t all that interested. Third, why give an award for "leadership and commitment" (tools) instead of outcomes of their use (results)? No offense to the winners, but we ought to be a little more mature than treating IT like its own little Most Wired science fair with winners and losers. Other than Concord Hospital this year, every past winner seems to be the huge, massively budgeted and staffed health system that represents about 0.1% of the hospitals out there purring happily along with non-award winning technology. All the hospitals I knew of (including my own) who won Most Wired made fun of it offline, so I don’t think anyone really thinks these magazine contests mean much (at least the HISsies recognize bad achievements, like stupidest strategic move and the much-discussed Pie in the Face award). Modern Healthcare is usually more rational than the cheerleading HIT magazines, so I’m disappointed. Next think you know they’ll be giving away a car at HIMSS to bribe people to visit advertiser booths.

Eclipsys names former Per-Se CEO Philip Pead to its board. Says he’s a managing partner of Beacon Point Partners that’s supposedly a healthcare consulting organization, but I’m guessing it’s just his own shingle since the only connection I could find had an address in a building full of multi-million dollar condos in Coconut Grove, FL.

Microsoft will be selling Amalga in the UK, at least if customers want it.

This is interesting, but confusing. An Illinois clinic CIO who used to work for Allscripts is rolling out a registration kiosk for his clinic, which he developed under his separate company, and which Allscripts will resell.

South Dakota pharmacist and physician groups want the state to join those that have rolled out a doctor shopping prescription database.

Vint Cerf, who beat Al Gore in creating the Internet, makes the case that online privacy is relative. His example: if you’re in the ED, you don’t care about privacy at that moment because you want staff to see your medical records so they can help you. But, that proxy should be limited by time, so that the ED has a few hours to check out your information, but your doctor has longer. That’s an interesting concept: time limits can be a privacy enforcer (after you’re discharged or transferred, for example).

A Texas company wants a judge to let it tap into the accounts receivable of shuttered Brownsville Tri-County Hospital (PA) to collect the money owed to it, blaming inept hospital staff for its failure. "The audit revealed that (the hospital) and its personnel do not fully understand the components and functions of the (computer billing system) due to the fact that expertise in neither hospital billing nor financial reporting exists within the hospital."

Check out this amazing photo and story from the UK, showing "the world’s highest intensive care ward" in a C-17 Globemaster transport jet in which British troops critically injured in Afghanistan are brought back for treatment.

Sad lawsuit result: a baby born in 1988 with brain damage is awarded a $2.4 million medical negligence award in 1999 from a Boston hospital. She lived with her father, who was just sentenced to five years in federal prison for spending more than half her money on race cars, drugs, and his own attorney fees in trying unsuccessfully to beat an attempted murder charge in 2004.

SouthEast Alaska Regional Health Consortium (SEARHC) launches the ALERT EDIS from ALERT Life Science Computing. SEARHC is in the middle of a two-year, $5.4-million transition to EHR, one of first and largest of its kind for tribal health systems.

The VA discovers that a contractor providing medical transcription services violated department rules by allowing employees to use computers that did not adhere to the government’s security policy. The contractor has been suspended, even though there is no evidence that patient information was disclosed.

Conifer Revenue Cycle Solutions files a warning letter with the Texas Workforce Commission that confirms 57 employees will be laid off by April 13th. The 2,300 employee Conifer is a division of Tenet Healthcare. The affected employees are employed with within Conifer’s Center for Patient Access Service.

As everyone scrambles trying to figure out how to get their piece of the economic stimulus package, I am wondering how things will shake out with vendors. For example, what if your product is not CCHIT certified? Are you going to lobby against any policy that formally requires providers to have CCHIT–certified products in order to receive subsidies? Or are you going to rush to get your product certified? Do vendors need to start ramping up their implementation staff (if they haven’t already?) I also wonder if providers will attempt to hold vendors liable should a provider fail to be using EHR “meaningfully” in time to qualify for the various adoption deadlines.

Informatics Corporation of America (ICA) announces that its solution is live and aggregating data from all core clinical systems at Northwest Healthcare (MT). 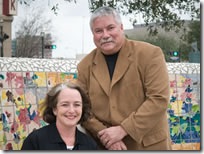 IntelliDOT appoints Margaret Laub to its board of directors. She is CEO of the HIT outsourcing company Policy Studies, Inc. and a former president for McKesson Health Solutions.

Cardinal Health chooses CareFusion as the new moniker for its $4 billion clinical and medical product business spinoff. You may recall that they acquired CareFusion awhile back, so they are getting good use of the name.

I’ve received a number of e-mails recently asking if any fake Ingas will be floating around HIMSS. Truthfully, I have no idea. I wonder if fake Ingas are too “last year?” Perhaps too frivolous in these days of tight budgets? On the other hand, who could resist a wise (and sexy) fake Mr. H, with sort of a George Clooney-ish look? Wouldn’t we all feel a little more reassured that our HIT world is safe if we had a few Mr. Hs bopping around?

PatientKeeper and St. Vincent’s Hospital Manhattan will host an eSeminar focusing on the hospital’s use of PatientKeeper’s charge capture and clinical portal. The event features CMIO Dr. Richard Roistacher and takes place February 26th from 2-3:00 EST.

HIMSS is hosting a series of Webinars highlighting the new economic stimulus package and its effect on healthcare. In additional, HIMSS has added 10 new sessions on the topic for the April convention.

A KLAS study concludes that healthcare providers are largely unaware of the RTLS solutions on the market and their capabilities. Only 29% of those surveyed could list an RTLS by name and 59% were unable to identify which RTLS offerings they would consider using.