From Inside Outsider: "Re: Sunquest. Hearing from Sunquest insiders that the New Year layoff axe has begun and folks with close to 20 years of time served have been shown the door." Unverified, but I’ll invite the company to respond.

From Health Care Consumer: "Re: video. This video made me laugh — you should watch it." Loved it — Red Sickle Red Armor Insurance. The tag line: "This is what health insurance corporate videos would look like if they told the truth. And, if they hired crappy animators." They make fun of "non-profit" RSRA (wonder what insurance company that could be?) "As a non-profit, we don’t have stockholders. No, we don’t have to answer to Wall Street when we’re meeting your healthcare needs. And we don’t have to share the money we make with anybody else. We’re free to stockpile it and use it to build the infrastructure that keeps our company running properly. For example, did you know that we have 4,000 corporate vice presidents?"

From Andy: "Re: errors in the UK." Link. NHS records show that 3,645 people died in one year due to "patient safety incidents" that included surgical errors, incorrect diagnosis, staff or employee abuse, falls, medication errors, and equipment errors. Those are the errors that were reported and proven to cause death, of course, so the real number is almost certainly a lot higher (only 54 died from medication errors, the reports say, which is only a little higher than the number of fatal equipment errors, so that’s probably a too-low number for meds). Still, deaths (or, more accurately, reported deaths) were up 60% in two years. 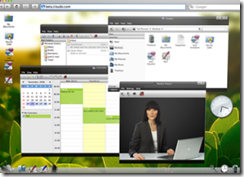 From The PACS Designer: "Re: Cloudo. If you want to have an online PC to collaborate and share files with with others, there is a new application called Cloudo, or a PC in the cloud. It does just about anything a physical PC does with the added benefit of easier sharing of documents, photos, etc. and also includes the ability to do cell phone file sharing and retrieval." Link. Looks pretty cool, "a computer that lived on the Internet, instantly accessible from any computer or mobile phone."

From Ted Peters: "Re: ThedaCare’s lean program. They use lean events to streamline work flows. Epic is flexible enough to accommodate the new work flows and Epic’s done quite a bit of development to enable the stuff Theda wants to do, making life easier for other customers as well. ROI doesn’t come to those who wait, it comes to those who are going out and using a good EMR as a tool to get there." Link.

I’m not exactly sure why HIMSS needed to acquire a privately published magazine, but it’s the new owner of Government Health IT. I don’t like that for several reasons: (a) it was the only magazine I actually read and sometimes referenced here other than Computerworld, so I have this feeling that it’s about to become a lot less interesting and objective; (b) HIMSS will surely use it to beat readers over the head with its pro-vendor advocacy agenda even more than it already does through other channels; (c) only one employee is coming over in the deal; (d) it was one of very few HIT publications out there whose original, independent reporting didn’t sound like some fresh-faced 2.5 GPA state school journalism grad trying hard not to sound clueless about both the subject matter and the audience; and (e) it was already free anyway, so it’s not much of a HIMSS member benefit. I got the internal memo sent out by the selling media company to its employees, which said "we were made a very attractive, unsolicited offer," so the HIMSS salivation over possible HIT lollipops from Obama must have set off a fierce desire to get even closer to the feds.

Someone just sent me a LinkedIn connection request, which reminds me: Inga and I will approve any we get because we’re enablers in your quest to dominate other LinkedIners with your impressive connection list. The HIStalk Fan Club is up to a startling 461 members, outdoing some of the magazines that started their own groups since readers didn’t do it spontaneously.

Army doctors at Landstuhl Regional Medical Center in Germany report excellent experience using Nuance’s Dragon Medical with the AHLTA clinical system. The Surgeon General says the 10,000 copies bought for world-wide use will pay for themselves in less than a year with transcription savings.

Medicity reports 81% revenue growth in 2008, its tenth anniversary, with strong sales and the hiring of 51 new employees focused on R&D and customer support.

A non-profit organization created to raise money for the University of Hawaii medical school is deep in the red, owing the school $7 million. The organization was supposed to generate revenue, manage grants, and provide billing services. The dean sounds like he’s running GM: "We have collectively inherited an entity undercapitalized at the beginning that has limped along and has required a re-infusion of capital to upgrade its operations." 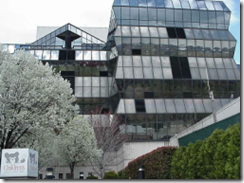 A New York Times article covers personalized medicine, tailoring drug selection and doses based on individual patient genetic makeup with the strong possibility of choosing more effective treatments, reducing cost, reducing side effects, and speeding up response. EMRs are going to be a key, of course, which is why smart vendors like Cerner, Epic, and others are building genetic data capabilities into their products. Not that you care, but here’s how I’ve explained it to people: it’s like the vastly increased accuracy in weather forecasting that happened once meteorologists discovered air mass behavior and the effects of barometric pressure instead of looking at old weather charts and basing today’s forecast on last year’s weather.

Don’t forget to make your nominations for the HISsies awards. The actual voting will start in a few days, but the only choices you’ll have are those that have been nominated (you’ll feel guilty if Neal isn’t on the ballot for The Pie, won’t you?) The winners will be announced at the HIStalk event at HIMSS, assuming there is one, of course (stay tuned).

Eclipsys completes its acquisition of Premise.

Hospitals in Yemen’s capital city go on strike after a doctor is killed by a man who said his father died from the doctor’s medical error.

Odd lawsuit: a rheumatologist’s patient claims she asked him repeatedly to provide a sign language interpreter during her office visits. He declined, saying as a a solo practitioner that he couldn’t afford the $150-200 per visit cost when Medicare was paying him only $49. The woman’s visits were routine and she had no complications, but she sued the doctor, claiming he violated federal and state anti-discrimination laws by depriving her of the opportunity to fully participate in her care. The jury awarded the woman $200,000 and another $200,000 in punitive damages, all of which comes from the doctor’s pocket since it wasn’t a medical liability issue (and in fact, he wasn’t allowed to bring up her satisfactory medical outcome as part of his defense). 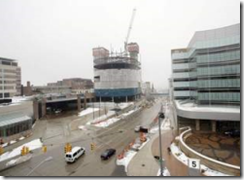 Here’s why healthcare costs keep going up: Grand Rapids, MI, reluctant to allow growth and tax revenues to slow, bets the farm on a Medical Mile of new hospitals and healthcare vendors to create high-paying jobs. As Don Berwick says, will that really improve health, or will it just increase cost?

The owner of several defunct medical software companies in Tennessee is charged with fraud in an alleged $17 million scheme to obtain loans based on bogus software sales.

Memorial Hermann claims its "quick look" ED program, where nurses give patients a quick check within five minutes of ED arrival to get the really sick ones to a doctor faster, says the wait time to see a doctor has dropped from 93 minutes to 20. It’s amazing that we still haven’t figured out an acceptable way to keep routine patients from clogging up the ED.

From Jon Bon Jovi: “Re: CD sales. Yes, CD sales continue to plummet, but downloads continue to grow (whether or not anyone is paying for those downloads is another issue!) Quite a few of my musician friends are now moving to the idea of not even pressing indie CDs anymore, and just offering new recordings online. Amazing.” The article I referenced last time indicated that one reason vinyl sales were up is that they were cheaper than CDs or downloads.

From Clement Clarke Moore: “Re: poem. Loved the Night Before Christmas poem.” Thanks to everyone who said they enjoyed the HIStalk version, which I presented to Mr. H as a Christmas present. IMHO, I thought it was kind of clever.

I’ve been a little behind on my news and my e-mails with the holidays, but I think I’m almost caught up. My apologies to "Lindsey,” who I e-mailed back at 2:00 a.m. New Year’s Eve morning (note to self: try that new Mail Goggles feature).

Gwen Darling with Healthcare IT Jobs has been telling me I need a Twitter account, so I finally set one up this weekend. I am not sure that I need something else to keep up, but I’ll try it for awhile. If you care to tweet (twit?) me, look up IngaHIStalk.

INTEGRIS Health extends its deployment of Allscripts Care Management from two hospitals to all 13 of its Oklahoma facilities.

A VA study of 35,000 patients finds that telehealth programs help patients to better manage their health. Hospitalization days dropped 25% for patients using home telehealth and hospital stays fell 19%. The services cost an average of $1,600 a year.

IBM CEO Sam Palmisano predicts that more than 900,000 jobs will be created if the government invests $30 billion in HIT.

And more stories like this: Baptist Health of Pensacola fails to obtain financing for the $245 million purchase of West Florida Healthcare, a unit of HCA. Baptist has always received recognition for its quality and patient services programs, but it never seems to make money despite that (apparently there’s no profit in either one, which is a pretty sad commentary in itself). 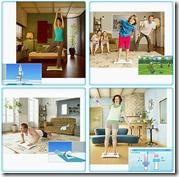 Like Mr. H, British physiotherapists (aka physical therapists in Yank-talk) enjoy the Wii Fit and even incorporating it into rehab routines.

Faithful readers will recall that my background is more in the ambulatory world, unlike Mr. H, who lives and breathes hospital stuff. I finally convinced him it would be cool to have a HIStalk site that focused on the physician world and he finally gave in. Please check out HIStalkPractice if you are interested in technology for the doctor’s office. If you like it, sign up and tell all your friends (we have 208 subscribers so far on our second day – thanks! and also a couple of sponsors to announce shortly). I feel like I used to when I sold a brand new version of software … kind of like, now that I have made the sale, will it really work?

The Wall Street Journal reports that in 2007, healthcare spending grew at its lowest rate in almost a decade, although the 6.1% increase is still a faster rate than the overall economy. Interesting statistic: we spend $7,421 a person for healthcare ($2.2 trillion overall).

Iowa institutes a new computer system designed to track purchases of most prescription drugs. The database is expected to help doctors and pharmacists track drug seekers.