From The PACS Designer: "Re: Skyfire. If you want the PC look for HIStalk and also TV viewing on your cell phone, check out the demo from Skyfire, which is a free download. They claim to be better than most other cell phone Web and TV viewers and can easily outshine the iPhone and Opera-mini viewers." Link.

The European Commission’s high-level, invitation-only conference will merge with the World of Health IT conference of HIMSS. I was going to make a joke about France surrendering to HIMSS next, but at least one person e-mails me a nastygram when I drag that joke out of mothballs, so I’ll claim new global enlightenment.

AT&T is offering free Wi-Fi for buyers of some of its smartphones (including the new BlackBerry Bold, out today), with details of its Wi-Fi services here. Coincidentally, my AT&T contract just ran out last week, so I’m seeing what’s out there, although I’m too cheap for anything more than basic voice-and-text-message service. 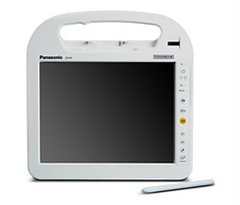 Panasonic announces the $2,999 Toughbook H1 mobile clinical assistant, claiming six-hour battery life and featuring RFID and bar code readers, a 2-megapixel camera, a smart card reader, and fingerprint readers. Cool feature: it has a utility that sends wipe-down reminders to users and marks them as done in a database.

Uganda is considering implementation of an e-health system.

Emageon will pay CEO Charles Jett $1.2 million in severance when the company’s sale to Health Systems Solution, Inc. is finalized.

Only in hospitals: a clergyman is taken to a British hospital ED to have a potato surgically removed from a rather private area. He claims he fell on it while hanging curtains naked.

An AMA survey concludes that PQRI process needs to be made easier for physicians. Most could not download reports and less than half of those who did found them useful. Physicians also complained that reports took 12 months to receive, which didn’t leave them enough time to make adjustments to qualify for bonuses.

It sounds like MedcomSoft is running out of options for staying afloat long-term. The company will keep trying to find a buyer (at far less than the $15 million of new capital originally sought) or initiate a wind-down of the business. Each of MedcomSoft’s board members has also resigned.

Virtual Radiologic signs a deal to be VHA’s preferred provider of teleradiology services.

eClinicalWorks is hosting its four-day conference in Orlando, sold out with nearly 1,200 attendees. New products were announced for next year: eClinicalMessaging (physician-to-patient messages) and eClinicalMobile (smart phone access for physicians). Also announced: a new deal with Continuum Health Partners (NY) and its 3,300 docs. The nice folks at eCW invited Mr. H and me to attend this first national conference, but unfortunately neither of us could make it happen. I personally hate missing a good time, so if you are there, send us an update.

Siemens Healthcare Diagnostics will lay off 151 Los Angeles-based employees on December 30th, according to reports.

The Minnesota Department of Health’s Office of Rural Health and Primary Care awards $3.5 million in grants to 21 EHR implementation projects.

The NY State Department of Health extends CSC’s contract to support the state’s Medicaid system with a $322 million, three-year contract.

A couple of Dallas area readers forwarded me this story. A Baylor Healthcare laptop taken from an employee’s car in September contained names and treatment codes for 100,000 patients and Social Security numbers for another 7,400. Leaving a laptop in the car is against Baylor’s policy and the employee was fired. Meanwhile, Baylor’s offering $1,000 for the laptop’s return and free credit monitoring to those affected.

Lakeland Regional Health System (MI), already a user of the agent-based healthcare exchange platform of Novo Innovations for its 70 affiliated physicians, signs a new deal to offer it to its remaining 200+ affiliated providers.

Hard to believe, but Mr. H and I are already starting on some HIMSS-related projects. One big one is our pre-HIMSS HIStech Reports, which highlight individual companies with an interview and Mr. H commentary. We include a magazine-style reprint that several companies handed out at HIMSS last year to great response (until they ran out because everybody was picking one up). If you’re interested, e-mail me.