The views and opinions expressed in this blog are mine personally, and are not necessarily representative of Texas Health Resources or its subsidiaries.

I had the privilege of being a part of the CHIME faculty for a forum entitled CIO 2.0. Gartner representatives offered research and helped define the meaning of CIO 2.0. Faculty gave tangible examples from their unique experiences. In preparation, I had to do some introspection and analysis so I could succinctly convey my thoughts on the term and how someone could evolve from the traditional CIO to the technology leader needed for today and beyond.

I shared that CIO 2.0 presented the external manifestation of an internal transformation. It’s not about doing a couple of things differently in the workplace or changing the rhetoric or updating the eye glasses. Rather, it is a different way of interacting with life holistically, juxtaposed from traditional thought and action. It came down to five things I wanted to share with the forum. In an August post, I focused on one of these, Disruptive Leadership. This post will discuss Ubiquitous Influence.

People make too big of a deal out of which bigwig a CIO reports to. The prevailing belief foists upon us the idea that if you do not report to the CEO you have limited influence in your organization. Heaven forbid you fall into the legacy camp of reporting to a CFO!

In contrast, CIO 2.0 loses little sleep with regards to the reporting structure. They realize their influence is not confined to a specific reporting relationship vertical; it is instead ubiquitous, breaking out of silos and infiltrating the entire organization. While at University Hospitals (Cleveland), I reported to the CFO and arguably had greater influence on this prestigious academic health system than many of my peers who reported to CEO’s. It doubtless helped that I worked for a very progressive organization and one of the nation’s foremost healthcare CFO’s (Kevin Roberts, now with BJC). Choosing not to limit my influence to my silo, I reached across all aisles to gain bipartisan support for major strategic initiatives, which helped propel our organization from doldrums to national acclaim.

Sometimes an org chart can paint a thousand words. 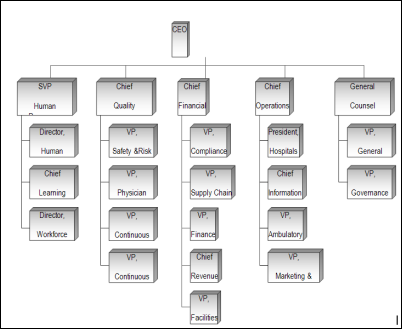 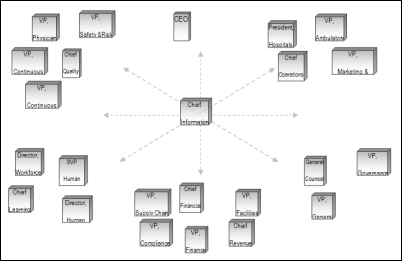 Ed Marx is senior vice president and CIO at Texas Health Resources in Dallas-Fort Worth, TX. Ed encourages your interaction through this blog. (Use the “add a comment” function at the bottom of each post.) You can also connect with him directly through his profile pages on social networking sites LinkedIn and Facebook, and you can follow him via Twitter – User Name “marxists.”