From Lisa LaPorta: "Re: practitioner certification exams. EMR vendors with an enterprise content management solution already pull all the information together to allow the physician to make a final diagnosis. The only piece that’s missing is test delivery and psychometrics. Any of the big players could create something that would have a larger market space than just certifying boards (universities, teaching hospitals, and residency programs)." Seems like a natural for McKesson, if indeed there is a market, since its May acquisition of Vivalog (now called Horizon Study Share) put it into the radiology teaching and reference case business.

From Louie Dampier: "Re: Misys/Allscripts. The first joint sales meeting starts Sunday. I’d like to be a fly on that wall." I admit that I’m not a fan of the deal because it came in a moment of Allscripts weakness (Touchworks v11 and erratic revenues) and I wouldn’t want Misys involved. Once it happens, though, I hope it works out since it affects the livelihood of a big bunch of people doing good work who can’t be blamed for iffy Misys leadership.

From The PACS Designer: "Re: CUI. Microsoft has rolled out its Common User Interface with the hope that we healthcare professionals will be willing to contribute help then improve patient safety and lower the number of medical errors. TPD has been experimenting with the Microsoft CUI and will try to enlighten HIStalkers in future posts." Link. That’s actually pretty cool, although showing its UK origins (paediatric, nil by mouth). I need to study it a little since I was surprised at its depth and detail for specific clinical situations. It would be nice to have good human factors design principles and consistency in healthcare apps. As always, though, standards=commodity to vendors, so it’s a hard sell. 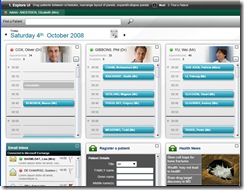 Speaking of Microsoft’s CUI and not to steal TPD’s impending thunder, but their Patient Journey Demonstrator is just about the coolest thing I’ve seen in awhile. I was also impressed that, even though it requires a Silverlight download, it seemed to work in FireFox. Click on the pic for a better look. Some of the stuff’s actually live and working, while other parts are mocked up. CUI also has an online community. I have no idea who’s actually doing anything with this.

Lisa LaPorta’s comment reminds me that this is a good forum for vetting potential HIT-related business ideas. I say that self-servingly since I’m intensely interested, but I think everybody likes brainstorming. I’m a great idea man, but my value drops off quickly after that. I’m damned annoying when someone innocently says, "What do you think of this idea?" and I start speaking in tongues with about all the stuff racing at hyperdrive through my head. Inga gets all kinds of odd-hours e-mails full of stuff like, "What if we started a ‘systems we’re using’ site for CIOs? Should we do another electronic newsletter? What kind of fun can we create at HIMSS? Can you get that celebrity psychologist Dr. V to do some fun stuff with us?" Loyal co-conspirator that she is, she always tries to sound slightly supportive while hoping I’ll forget about it.

MediNotes CEO Don Schoen says sales leads tripled the first day after its acquisition by Eclipsys, speculating that doctors are familiar with the Eclipsys name from their hospital work. Don will stay on, the company won’t move from Des Moines, and the MediNotes name will apparently live on as a wholly owned subsidiary.

New poll to your right: do you agree with the HIMSS decision to not support Pete Stark’s HIT bill because it advocates open source software?

Kaiser Permanente Southern California has the highest rate of breast cancer screening in the country according to an NCQA analysis, crediting KP HealthConnect’s record flagging that allows any KP employee to remind the patient that they can get a no-appointment mammogram or make an immediate appointment. Criticisms aside (cost), it appears that Kaiser is really using its EMR to do some darned interesting things that benefit patients. Once you get the application up to a critical mass of usage, you can put all kinds of value-added functions on top of its data and real-time patient encounters. 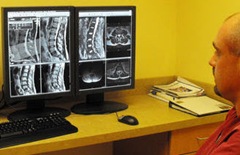 Fulton County Hospital (AR) and CIO Phillip Hughes get mentioned in a local newspaper’s story about the hospital’s PACS.

Turnaround consultants from Wellspring Management want to extend their contract at Natividad Medical Center (CA), raising their CIO rate to $44,000 a month ($275 an hour) plus expenses. $528K a year to run the MEDITECH shop of a 172-bed county-owned hospital? Seems a bit rich. The company’s CIO has been there since January 2007, starting at $374K a year as an interim "until a permanent chief information officer could be hired." How hard could they be looking?

If you’re at Cerner’s shindig, how about a live report? I thought having clients blog live from it was fun a couple of years ago, but I haven’t heard anything about it since.

Listening: Big Star, a power pop cult band that should have been huge, but instead broke up in 1975. Also: new and excellent prog from Half Past Four.

It’s been a long time since I did this, but about a revival of Companies Invoking HIPAA’s Name to Sell Stuff But Misspelling It: Incentive Logic, Emtec, and Frost & Sullivan, not to mention dozens of newspapers. It’s amazing how many newspapers run the full name, but still put HIPPA in parentheses after it like they didn’t even notice what they just wrote. And as a reader wrote me, "Another healthcare acronym that’s sure to ratchet up the HIPPA not HIPAA misspellings … The Medicare Improvements for Patients and Providers Act (MIPPA)." That’s one thing that annoys me about healthcare – we make up long, cutesy names for stuff, then have to derive contrived acronyms because we’re too lazy to pronounce the long, cutesy names we made up in the first place. My blood pressure goes up every time I read a medical journal, especially when it’s obvious that an author has taken the opportunity to add to the acronymical abyss (AA) by making up his or her OWN acronym. You just know they’re also using some eye-rolling pronunciation to go with it. People saying "Jayco" for JCAHO used to drive me up a wall. Years ago, the HIMSS people were coached to say it out (H-I-M-S-S) but nobody picked up on their lead, so it died fast.

I was accepting some LinkedIn connection requests and Dann’s HIStalk Fan Club group popped up, so I took an unplanned look and was amazed to see 281 big-name members. It’s a fine networking list, that’s for sure. Maybe I should send the next ultra-hot insider rumor just to that list. LinkedIn has grown and improved unbelievably over the last few months, so it’s cool to see everybody on there and especially to see their pictures.

University of Illinois at Chicago is offering a fully online MS in Health Informatics. I would think that would interest clinicians who want to add formal credentials or maybe CIOs coming from other industries. I snooped around a little more and it appears to be 45 credit hours at $675 per hour, or about $30K for the program. That’s pretty reasonable for that kind of school and program. They’re running a text ad to your right, which is how I found them, although I think they’ve had a HIMSS booth in the past. They also offer post-Master’s and post-Bachelor’s certificates in health informatics. All of us industry long-timers used OJT to get where we are today (sorry about that!) so it’s exciting to see folks with formal education coming in, even though they’ll probably take our jobs.

Hawaii’s Big Island is losing three of its five orthopedic surgeons, including the president-elect of the state medical association. The problem: low reimbursement and high malpractice costs. Interesting fact: malpractice plaintiffs get no award 85% of the time, but the doctor pays an average of $150K per case to defend themselves.

1450 brings up a free online tool that helps physicians choose the most appropriate version of Dragon Medical for their practices.

Allina is eliminating 300 positions, among them that of former Fairview CIO Gary Strong, promoted to chief administrative officer in July 2007 and now headed for unemployment.

I hate CNN’s web site with its junk entertainment headlines, endless videos instead of stories, and so-called iReporters ("user-generated news") . One iReporter posted a message Friday morning falsely claiming that Steve Jobs had been taken to the hospital with chest pains, sending Apple stock down 9% and triggering an SEC investigation into whether the poster was shorting shares. Some of the hard-hitting investigative stories on CNN now: Howard Stern’s wedding, a Texas man is building a house of mud, somebody’s selling surfboards featuring naked women, why men cheat, and the world’s fattest man gets married. No wonder everybody else in the world thinks Americans are stupid – we get our news from the Enquirer.

The Illinois attorney general steps in when Cook County Hospitals and Health Systems refuses to release its budget after it was approved, claiming it’s a draft until Cook County Board President Todd Stroger makes any changes he feels like before submitting it to the county board. Apparently the budget calls for big increases in budget and headcount.

Northampton General Hospital in the UK bans staff use of Facebook after finding a cell phone picture of a topless night shift nurse on duty and in uniform on the site, with recognizable patients in the background.