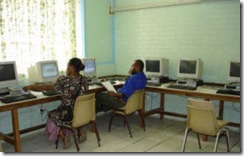 Goroko General Hospital in Papua, New Guinea (148th of 190 countries in world healthcare) is the first hospital in the country to set up a web site, which was created by its volunteer IT manager Robert Schilt. It looks great and is running in WordPress. Schilt has also established a 12-PC training center, rolled out 50 PCs, set up Internet and e-mail access for staff, built several departmental applications, and almost finished a hospital Intranet and a discussion forum for doctors. He build everything using open source software. He’s also looking for second hand items to help the locals, who he says "do not have two spare coins to scratch together." You’ll notice that his own family has donated a long list of items. Why can’t we get a selfless volunteer IT guy like Robert on the HIMSS podium instead of the usual Taj Mahospital people?

Microsoft chooses Philips SpeechMagic for Amalga. Wonder if the reader’s rumor will pan out that Philips will sell it? Maybe MSFT is interested.

Tom Skelton’s new company, MedcomSoft, turns in not-so-great FY2008 numbers: revenue down 46%, expense up 5%, losses up to $5.8 million. They’re running low on cash, have never made money in seven years, and need ongoing financing to stay open (good luck with that). Surely Tom’s job is to clean up the books and shop it around. Shares are at $0.06 and market cap is $6.2 million. If you want to pick up a CCHIT-certified vendor as an acquisition (and consider MEDCIN to be an advantage), you could probably get a great deal. I had heard it was expensive, but the company claims it’s $11,500 for the first doc and $6,500 for additional ones, still not the cheapest, but far less than some.

Fred Trotter seems surprised that "HIMSS is a lobby for proprietary for Health IT vendors," basing that on its refusal to support Pete Stark’s health records bill that includes pushing open source systems (not necessarily new systems – you may recall that the President’s early call for HIT specifically said VistA was to be made widely available). I’ve been pointing out the HIMSS business model for years:

HIMSS should not disappoint anyone since its methodology is obvious: get providers to join and attend its vendor-heavy conference, a neatly closed loop that makes HIMSS the paid matchmaker. There is absolutely nothing wrong with vendors and they are straightforward about participating in HIMSS to get an audience with prospects. HIMSS members sometimes are naive to that fact (although they’re rarely decision-makers anyway) and somehow expect that HIMSS will advance only inarguably noble and unbiased causes (no different than they expect of hospitals, and with which they are equally likely to be disappointed). I pay membership and conference costs out of my own pocket, so obviously I think it’s a good deal. You just have to swim against the tide sometimes to avoid being controlled. Do I feel they represent the best interests of my hospital employer or me personally? Absolutely not, nor do I expect them to. It’s a trade show, nothing more and nothing less, and free software doesn’t pay those bills. That’s my opinion and you are entitled to your own, of course.

Ivor Kovic, an ED physician in Croatia, likes the iPhone and lists some applications that are useful to doctors. 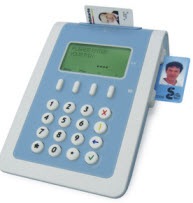 SCM Microsystems is rolling out this smart card reader, the eHealth 100, to support Germany’s electronic health card for 82 million people.

A city government uses cool PR technology that I’m surprised hospitals and vendor haven’t thought of (assuming they haven’t, of course.) Cheap 1 gB flash drives with logos are handed out to potential investors. Plugged in, they refresh themselves over the Web, then play a slide show, video messages, and provide links to detailed reports and electronic books. The "refresh" part allows running seasonal pictures and other fresh information, infinitely extending their useful life and also allowing the city to track how often they are used.

I noticed that the HIStalk e-mail blast list has just hit exactly 3,000 recipients, so thanks to all of you reading (blasted or not). Daily visits are at over 2,000, so this may be a record month. Thanks, too, to those who signed up for the reader-created HIStalk Fan Club on LinkedIn, now at 264 members. If you’re on LinkedIn, Inga and I would be honored to boost your connection count by approving all requests. You can help spread the HIStalk word by clicking the "E-mail this to a friend" graphic to your right and e-mailing a few of your colleagues about HIStalk.

Paul Newman dies at 83, having given away $200 million to causes such as his Hole in the Wall camps for sick children. He was also a World War II veteran. I can’t imagine today’s pack of shallow "celebrities" doing anything close.

Idiotic lawsuit: a TV reporter (an Air Force veteran) spices up her gun story with a showy stunt in which she fires a semi-automatic weapon at the police gun range wearing a noise-protecting headset. She claims she suffered permanent hearing damage and is suing the police department for medical bills, pain, suffering, and anxiety. The police department says she was negligent and didn’t see a doctor soon enough.

UCI Medical Center (CA) is put under state supervision and could lose its CMS funding over poorly kept anesthesiology records. Inspectors found some post-op forms that were signed and filed before surgeries were performed. Half of the anesthesiology professors signed a 2003 letter complaining that its mission had been altered from education to money-making. Previous scandals include selling body parts and implanting patient eggs in other patients without the permission of either.

Leapfrog Group’s "Top Hospitals" are trending down in number, although not as starkly as its drop-off in members. The numbers: 50 hospitals in 2006, 41 in 2007, and 33 in 2008. They blame a new requirement that requires hospitals show that their CPOE systems provide clinical alerts. If they add a future requirement that CPOE show a demonstrable benefit in cost or patient outcomes, that 33 number will look huge by comparison. Maybe the goal is to have no top hospitals.