From The Alchemist: "Re: innovative care models. A new RWJ grant-funded site focuses on them. I wish them success and hope to see more models. Innovative HIT models could quell my progressive cynicism." Link. Example: the "12-Bed Hospital," where a RN serves as "clinical CEO" in a hospital unit. Here’s a progressive IT model that I’ve thought about: what if the IT department was stripped down to just infrastructure and technical services, with everything else residing in and managed by user departments? Should IT really be its own department when just about every aspect of it, including all the benefit realization, requires committed user resources and strategic alignment?

From Dave Stallworth: "Re: your own fan club. I started an HIStalk Fan Club group in LinkedIn." I never thought I’d have a fan club. I can’t wait to tell Mrs. HIStalk (I’ll leave out the "one member so far" part to make sure she’s suitably impressed). Just so Inga doesn’t pout, she’s part of the package, I assume. Thanks for doing it. I assume anyone interested can find it (I’m a LinkedIn noob, so I have no idea). Should we send dues?

From Nasty Parts: "Re: GE. GE is enforcing non-compete agreements. Of course, most companies out there nowadays make you sign one, but rarely are they enforced. Apparently GE has started sending letters to former employees."

From Ann Farrell: "Re: Microsoft. I sent them this: ‘While I appreciate Microsoft’s desire to be a visionary in healthcare IT, it would be great if they’d touch base with the Planet Earth now and then. The need, value, and practical application for printer-generated medications is something I can only assume the techies at MS dreamed up and prioritized to hype in some ‘visioning’ session. If they’d just make their core OS (Vista) stable enough for patient care environment and solve real problems – some present for decades through many iterations of ‘new technology’ – then you’ll get our attention."

From The PACS Designer: "Re: cloud computing. TPD was surprised to find that Amazon sells web services through its Elastic Compute Cloud (EC2).  Also was surprised to find Red Hat is one of its partners, especially after the HIStalk interview with Dave Nesvisky. Anyway, surfing over to the Red Hat site highlighted a posting about cloud computing. Since it also covers the basics, thought it would be useful reading for HIStalkers." Links:  Red Hat, Amazon.

Some folks from Cottage Hospital will present a free May 28 webinar on teleradiology in critical access hospitals. Click Virtual Radiologic’s sponsor ad to your left to sign up.

Proventys, which sells software that tailors chemotherapy doses using EMR information, raises $5.65 million in VC money, hires a CEO, and announces that McKesson will use its technologies.

McKesson CEO John Hammergren endorses a healthcare reform plan under the Healthcare Leadership Council banner. Who’s in that group: giant companies making big money off the GDP-sucking system we have now (drug companies, big hospital systems that don’t pay taxes, purchasing groups, and supply companies.) The "reform" seems mostly to get Uncle Sam to pay for more insurance to keep the gravy train rolling along. I assume (but don’t know for sure) that it’s the same group listed here as shuttling members of Congress all over the place for "fact-finding" and spending millions (warning: PDF) on lobbyists. Other startlingly fresh ideas from the group: everybody should buy more IT and the government should reduce manufacturer liability. HLC linked up with other organizations to form a "Confidentiality Coalition" that, despite the name, tried to weaken it by petitioning HHS to drop the accounting of disclosures provision of HIPAA, declaring it "extremely burdensome and costly" (apparently it’s too much trouble to track who’s snooping around medical records, even using that fancy technology that everybody needs more of to save healthcare).

Celebrity-fawning politicians call on Dennis Quaid to educate them about medication errors. More specifically, his interest in getting around federal restrictions on suing drug companies at the state level over FDA-approved products. He believes the heparin label his twins’ nurse didn’t bother to read wasn’t big enough, so Baxter needs to write him a check (not the nurse or hospital). Guess even his millions won’t win him an HLC invitation after that.

The big headline says nurses "acknowledge" fatigue leading to mistakes in a "new study," but it should have been past tense: the just-released study came from a survey of 2004 incidents. Does it really take four years to tabulate a survey and write it up?

Microsoft bought a hospital system from Thailand, so now they need engineers to work on it. Interesting comments about HealthVault: "… while attitudes to sharing information varied, although in the US he said he believed that Microsoft had overcome resistance to sharing health information. The real question was the business model, and who would pay for the service?"

Pharmacy automation vendor Talyst gets $20 million in financing commitments. The CEO just left, leading to speculation that his resignation was a condition of getting the money. Surely Cardinal Health would like to buy them at some point.

More complaints about the New Zealand surgery system that’s being reviewed after patient safety complaints. A sore point: IT people are running the system instead of real users. "She claims patients are now being prepped for the wrong procedures. One was allegedly told by IT staff without a doctor’s say so to stop taking medication. Another needing a knee operation was given a letter for a dental procedure." I’ve known plenty of nurses and other clinicians who’ve been out of patient care for 10 years or more who still insist on providing medical advice and services from the IT department, with varying levels of quality, so I’m not entirely shocked.

Two BIDMC doctors, a husband-and-wife, warn that EMRs often contain meaningless cut-and-pasted and templated text instead of anything insightful and focused, leading physicians to skimp on diagnosis and history-taking.

I keep hearing that TEPR is on its last legs, so maybe this is the confirmation. A vendor doctor will give five different presentations there. I noticed that HIMSS, too, loaded up its agenda with vendor people last time, often as co-presenters, but sometimes speaking alone (which was highly unusual a few years back). I’m sure they know their stuff, but I skip those sessions every time since I don’t want to spend the whole time watching for bias, avoidable or otherwise.

A West Virginia doctor who won several awards and started an EMR company gets canned from his job as medical director of a community health center.

A controversy in Saudi Arabia, as pictures of a hospital’s celebration are posted online that appear to show "gender mixing." An inquiry found that males and females were seated together in the same hall, which is illegal, but the hospital director was let off with a warning instead of being removed as had been threatened.

Odd lawsuit: a patient being treated in the ED after an on-the-job accident alerts doctors of his HIV status. He claims he overheard one of them tell his boss, which the doctor denied at first, but  later admitted, saying she mistook his boss for a neurologist. The man claims he was left with crippling anxiety, which got him fired after a seven-month work absence. He’s suing the hospital, but not the former employer.

Odder: a 25-year-old female student gets off with probation after nearly killing her boyfriend during drunken sex. He asked her to carve a heart-shaped symbol onto his chest since they were regular practitioners of "body modification," but she pushed the knife too deep, piercing his heart. He lived, leaving the happy couple free to reproduce.

Cerner is one of 52 employers nationally to receive the Best Employers for Healthy Lifestyles award from the National Business Group on Health. With its on-site healthcare clinic, fitness center, and various wellness and conditioning programs, Cerner appears quite committed to promoting healthy lifestyles (no pizza jokes, please).

Another workplace focused on improving employee health is Opus Healthcare. I hear that 20-odd participants have collectively lost almost 800 pounds on a company-wide weight-loss initiative.

If you are interested in learning more about your prescription drugs, check out the latest service from HealthGrades. You can find out what meds are most prescribed within a particular class and what drugs are in and out of fashion. I actually was curious to check out my various psychotherapeutic drugs, but it looks like it is not quite operational.

Emageon loses $4.6 million ($0.21 a share) in the last quarter. This compares to a $1.8 million loss the same period last year. Revenue was also down almost 30% from the previous year. The CEO blames market conditions.

The San Antonio Metropolitan Health District is partnering with Vermedx for a diabetic intervention pilot program that will create a city-wide registry and map patient conditions. The project involves at least 50,000 diabetic patients

Eclipsys names John T. Casey and Craig Macnab to its board. Casey is chairman of Medcath and Macnab’s CEO for National Retail Properties and a former Per-Se board member.

HHS’ Office for Civil Rights has produced a pretty chart detailing enforcement results from April 14, 2003 through the end of 2007. Of the 32,594 complaints over the years, only two resulted in criminal convictions. 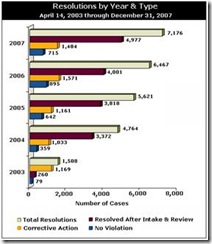