From Stu Mascarpone: "Re: Siemens. Even after flying in its entire top brass to NJ, Siemens in now only a clicking clock away from losing one of its key flagship Soarian clients, HIMSS President’s Award-winner Hackensack Univ Med Ctr. After basically turning nothing on since 2004, HUMC is now in negotiations with Epic. The kicker: Epic is telling HUMC, which has an IT department of over 100 FTEs, that it is understaffed. So, before the Epic project can start, the hospital has to hire in excess of 50 FTEs and then send them to Madison to become Epic certified. Total cost is already estimated at well over $100M." Unverified. Makes sense on the staffing though. I can’t imagine installing Epic or any other big system with just a handful of reassigned staff and 100 total in the shop sounds light. Scrimping on help after spending millions on the system doesn’t make sense since the project will never get done. But, that’s an argument for considering all costs carefully upfront instead of just taking a hiring leap of faith after you’ve signed the deal.

From Gatorray: "Re: your article on CIOs. There are other factors involved in the success or failure of a project. One that drives me nuts — having the IT department off-site. I know space is at a premium in the hospital, but sticking all of us IT types in another building away from the main campus removes us from the care-giving environment. It helps foster an us vs. them attitude." I’m with you there. It’s cool being off in the geek building where you can wear flip-flops and leave campus for lunch easier, but you’re just another vendor at that point. It’s much easier for users to hate people they never see face to face.

From Tina Recruiter: "Re: McKesson. They reorganize every year, change sales leadership every year, change sales strategy every year. Why would this year be any different?  The resumes are flowing on the streets, so something must be happening. BTW does anyone know what is happening with the McKesson ED product?" I had another company tell me they’re getting snowed under with Misys resumes (other than the recruiter I mentioned a couple of days ago), so it’s not just McKesson, I’m thinking.

From Carl Kibble: "Re: Cerner picture. If Neal Patterson reads HIStalk, he must be beside himself (again) because your picture of the Cerner headquarters shows the parking lot (scroll to the left or right) as 98% empty. It must have been about 5:05 PM. No pizza deliveries to be seen either." I meant to comment on that, but I figured those parking spaces must be for visitors since most companies make the help park out back. I doubt he reads, although if I were a shareholder or employee, I’d want him to.

Welcome and thanks to new HIStalk Gold Sponsor Renaissance Resource Associates. They’re in University Place, WA and provide consultants for projects involving Epic, Centricity, Picis, Sunrise Clinical Manager, and other hospital systems. They’ve got some positions available too, I noticed.

Take your last fond look at Merge Healthcare as it slips into likely oblivion. Shares are at $0.52, the company adds to its thick Nasdaq folder a delisting notice because of share price, and just-announced Q4 revenue was a paltry $15.6 million with EPS was -$0.28 vs. -$0.93. Improving, but they’re bleeding cash and not exactly inspiring confidence in prospects (if there are any). Stick a fork in ’em, I’ll predict.

Medicity just sent out its latest electronic newsletter, which I always enjoy. The company did 10 million clinical transactions in the last quarter, has 97,000 physician users, announced Hospital Sisters Health System as a customer, and hired Gifford Boyce-Smith as CMO. They also mentioned my positive comments about their booth, which I thought was very cool, and included a picture that I’m stealing since the HIMSS Police made me holster my camera before I could take one. Looks like you’re headed up the stairs of a spaceship. 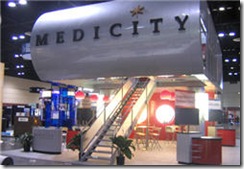 If you’re a hospital CIO or IT manager, please take my medical device survey for our little white paper project. Thanks.

More HIPAA problems at UCLA Medical Center: the hospital fires an employee for selling information from Farah Fawcett’s chart to a tabloid. The rag got the ultimate scoop — reporting her cancer relapse even before she’d had the chance to tell her family and friends. It’s like drugs, though: you will never win trying to curtail supply instead of reducing demand – all that does is raise the price. Most of the country seems to be preoccupied with reality TV and gossip sites, too busy to worry about war, the economy, or their own financial future.

Doctors order inappropriate lab tests because of computers, including ordering prostate screening levels like PSA on teenagers who don’t need them.

Teddy Kennedy and the usual suspects urge passage of what must be the hundredth health IT bill, of which the previous 99 have gone down in flames. It would codify ONCHIT, give the office $5 million a year, and provide IT grants. Among the rosy verbiage was nothing about the bill’s cost: $692 million (when it was originally proposed in 2005, anyway).

GE Healthcare will shut down its Tampa office, with 72 jobs moving to Milwaukee and to Finland.

Philips signs a research partnership with 5,000-bed West China Hospital, one of the largest in the world, to develop medical imaging procedures and cardiovascular monitoring.

OK, here’s a couple of hospital pictures from Google Street View to guess. I’ve been to both campuses and I recognize them – how about you?

Mobile computing supplier Socket Mobile announces the results of an “informal” survey conducted during HIMSS. The top concern of HIT professionals is apparently improving patient care, with 1/3 mentioning bedside POC as their top IT initiative. Lack of employee computer proficiency and cost factors were the chief impediments to implementations. The survey also noted that most institutions were considering laptops and COWs, not handheld devices like Socket Mobile sells.

Saint Clare’s Health System says it has saved thousands of dollars a year on paper costs using DB Technology RAS and RASi for enterprise-wide data and report management system. I am sure that saving “thousands” is a good thing, but for an organization the size of St. Clare’s (four hospitals), I sure hope the “thousands” are more like $90,000 than $3,000.

“What Nurses Want” — a completely electronic health record, which they believe will give them more time for patient care and improve patient safety and quality of care.

For those of you who tried but were unable to read Ed Marx’s CIO Unplugged blog. Ed, as well as his editor, dropped me a note saying there were some technical difficulties and the link is now working. I suspect the outage was related to a flood of his HIStalk fans visiting his site, but Ed was too modest to admit that was the issue.

And if you were trying to check out the Soarian user group I mentioned earlier this week, here is the correct link: www.soarianusers.com.

Perot Systems names John Hummel its new CTO for global healthcare. Hummel was most recently CIO of the California Prison Healthcare Receivership and Sutter Health CIO prior to that.

Six facilities have signed a total of $3.2 million in contracts with RIS/PACs vendor DR Systems. The contracts range from $195,000 to $1.1 million.

Only five VC-backed staged IPOs came out in Q1, the lowest number in about five years. Of the five, four were medical device or biotech companies and one was a computer security technology company.

I suppose looking at IPO numbers is as good a way as any for gauging the state of the economy. My next door neighbor surveyed our regular UPS and Fedex drivers, who both said their companies are laying off drivers and consolidating routes to cut costs. Personally, I have found that getting in for a pedicure is easier than ever, so I am blaming (thanking?) the economy, too.