When I was deep in the primary care trenches, I used to fantasize about insurance companies that would allow you to skip their prior authorization process if your track record had no previous denials. That might become a reality in Texas, as a recently passed law takes effect this fall in which physicians who have a certain track record can be exempted from prior authorization process. They will need to demonstrate that 90% of their treatments in the previous six months met payer criteria for medical necessity. Now we’ll have to see whether EHR vendors update their clinical decision support algorithms to capture whether a physician has to deal with prior authorizations or not. Still, it’s a victory for patients who won’t have care delayed and for physicians who can reduce overhead spent on needless bureaucracy.

I’m lamenting the fact that both of my local medical schools have apparently decided that the pandemic is over, canceling virtual access to Grand Rounds and other presentations. For those of us who practice in the community or who aren’t near the medical campuses, being able to attend sessions from a distance was a tremendous boost. I attended more lectures in the last year than I had in the previous five years. Hopefully, some of my out-of-state sources will continue offering virtual options.

I admit that sometimes trying to do a virtual / hybrid offering can be challenging, but at a minimum they should record the sessions and allow people to access them later. They’re already doing those kinds of recordings for medical school lectures (and had been doing so long before the pandemic) so the technology is largely in place. Why wouldn’t you want to get your message to as many physicians as possible? Seems puzzling to me, but maybe some readers have more insight.

Surgeon General Vivek Murthy takes aim at health misinformation this week, urging communities, health professionals, and tech companies to help patients understand the reality behind COVID vaccines, treatments, and overall status of the disease. His call to action takes the form of a Surgeon General’s Advisory like those that were used in the past to address smoking and other serious health threats. The document calls on researchers to better qualify the damage done by health misinformation. It also calls on tech companies to monitor misinformation and to protect health professionals from harassment.

Banner Health is on the naughty list with many of its employees this week for issuing a commemorative coin to those who supported the health system’s pandemic efforts. A Banner spokesperson stated they hope it “will be a reminder in years to come of what we were able to achieve together during this once-in-a-lifetime event.” This rings hollow because we’re certainly not out of the woods yet and their putting the efforts in the past tense doesn’t reflect that many of the impacted workers are still grinding it out in the trenches as COVID infections keep rising. Also, some of us don’t want to remember what it was like in the worse parts of the year, because it gives us great anxiety and increases our stress levels. I’d be interested to see the statistics on whether the coin ended up in a random junk drawer for employees or whether it went straight to the trash. 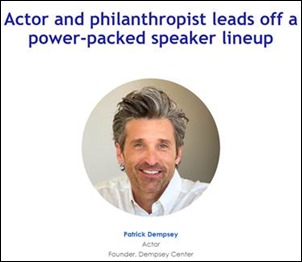 HIMSS21 is trying to lure attendees to its digital edition with Dr. McSteamy himself. One of my shoe-loving BFFs clued me in on the advertising campaign, noting “who at HIMSS thought it would be better to highlight an actor overall those other great speakers?” I get the philanthropist angle, but I’m guessing they went for the eye-candy factor, since the rest of the lineup includes healthcare leaders, innovators, and CEOs. I didn’t even get the email hyping Patrick Dempsey’s participation, so thanks again for keeping me informed. For those with more insight into the whole HIMSS21 situation, I’d be curious to hear your anonymous reports about the truth of registration numbers or the proportion of attendees who plan to participate in-person versus digitally. Everyone I’ve reached out to is being tight-lipped about the registration numbers.

Now that he’s not busy with Haven — the defunct effort by Amazon, JPMorgan Chase, and Berkshire Hathaway which failed at fixing healthcare like so many others before it — Atul Gawande, MD is being nominated for assistant administrator for the United States Agency for International Development’s (USAID) Bureau for Global Health. Gawande will need to be confirmed by the Senate, but tweeted that “With more COVID deaths worldwide in the first half of 2021 than in all of 2020, I’m grateful for the chance to help end this crisis and to re-strengthen public health systems worldwide.” USAID is tasked with advancing US interests abroad, but I sure hope there is a focus on advancing public health systems within the US. They’re under attack, and if anyone doesn’t believe we’re headed towards a dystopian universe, check out what’s happening in Tennessee, where the legislature has bullied the Department of Health into stopping vaccine outreach for teens, even for flu shots or other proven lifesaving vaccines. 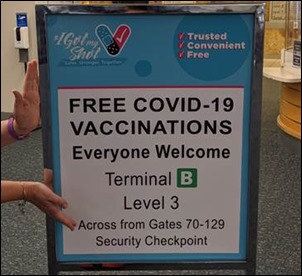 I spent a few days out of town this week and was happy to be somewhere less-COVIDy than my home state. In case you’re interested, free vaccinations are available at the Orlando airport. The US has already administered 337 million doses, with 161 million individuals being fully vaccinated. With everyone unmasking these days, it’s clear to most of us in healthcare that vaccines are going to be the only way out of this thing without an ever-climbing body count. We are now almost a year past when the Pfizer clinical trial started, with more safety data in the first year of this vaccine than any vaccine in the history of vaccines. If you’re still holding out, remember this: your choice isn’t necessarily between vaccine and no vaccine. Unless you’re going to stay in your house with no visitors or wear a delightfully snug N-95 mask everywhere you go, it’s more likely that your choice is between vaccine and COVID-19. Let’s fight this thing, folks.