EHR vendors, get ready to make some updates: The US Preventive Services Task Force (USPSTF) plans to recommend screening all adults for illicit drug use, including inappropriate use of prescription drugs. The draft recommendation statement is open for public comment through September 9. As an EHR client, we expect these kinds of recommendations to play out in our EHR as soon as they’re published, but for many vendors it’s a long road between when a recommendation is issued or a guideline is updated and when it actually is in the hands of the majority of their clients. I’d be interested to hear from vendors how they approach these types of updates and how quickly they can get them to the point of care.

Speaking of recommendations and regulations that never become reality, here comes yet another delay for implementation of the Appropriate Use Criteria for advanced diagnostic imaging that was initially passed in 2014. NPR reports that the delay will continue, with 2020 as a “testing” year where Medicare will not block inappropriate scans. CMS won’t make a decision until 2022 or 2023 on whether (and when) penalties will begin. The reality is that Medicare and other payers continue to pay for unneeded diagnostic exams. These exams are often ordered because patients demand them, even though they show low clinical utility. Physicians increasingly worrying about being “dinged” on patient satisfaction scores that go along with it, often under duress. Advanced imaging services are a profit center for many medical institutions and physicians chafed at the idea that they’d have to log additional keystrokes in the EHR to document compliance with the criteria.

A friend of mine who used to work in corporate IT has recently moved into the world of healthcare IT. I’ve been enjoying his reactions as he learns about all the crazy stuff that we have to deal with, including managing claims, handling capitation payments, and more. He recently visited a practice that was processing data using stacks of papers to trigger the workflow and track who was doing the work. I’m thinking about prescribing him some muscle relaxers to counteract the ill effects of all the head shaking he’s probably doing. It’s always amusing, but sad in many ways, to watch someone experience the dirty underbelly of healthcare. It’s a mix of shock, disbelief, and outrage. Those are the same emotions I’m feeling while I read “Code Blue: Inside America’s Medical Industrial Complex” by Mike Magee. I had started it prior to my international medical adventures and resumed the read after hearing from my fellow volunteers. Hearing from them about how healthcare is delivered with lower cost and higher quality in their countries just makes my blood pressure rise. I sold any stock in EHR vendors long ago, but will be divesting some remaining pharma investments shortly. Shareholders are part of the problem, not the solution.

Corporate profiteering is everywhere, and I experienced it in another conversation today. One of my residency colleagues went to work last year for a group that does Direct Primary Care as an employee benefit. She’s been enjoying the work, especially the part where she has an hour for new patient visits and 30 minutes for regular visits, and feels like she actually has time to partner with her patients to improve their health. She wanted me to know that her company is expanding to my area and to see if I was interested in a referral to their recruiter. Since that’s a major aspect of primary care that I miss in my current clinical practice, I said I was game.

She proceeded to tell me a little more about the company, including that they were recently purchased by a PE firm and that there has been the addition of a good number of VPs that don’t seem to do anything but have titles in sales, marketing, and operations. That’s part of why and how they’re expanding; the PE money is an infusion but also increases the need to create some revenue from the system. Although their profit is largely driven by the difference between what the employers pay and the services the patients use, she agrees it’s only a matter of time before the nature of the practice changes. For providers in the trenches, though, it’s a difficult balance between practice paradigms that have good elements but some features that are unsettling. Her final thought was that it’s still better than the HMO she used to work for, so I guess there’s that. 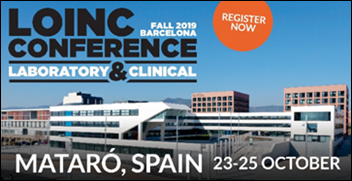 I’ve always wanted to visit Spain, and I wish I was still doing a reasonable volume of lab work so I would have justification to attend the upcoming LOINC Conference outside of Barcelona. Both the Laboratory and Clinical LOINC Committees will be at the same meeting for the first time, and the conference fee is low compared to other organizations. For those of you heading to the sun-drenched Mediterranean, enjoy!

The next couple of months are full of meetings and functions. ONC is hosting an interoperability forum  August 21-22 that has a good-looking agenda, but there are too many parallel tracks – I wouldn’t be able to pick just one to attend. There’s also a symposium on September 6 around patient matching for prescription drug monitoring programs. This also starts the User Group meeting season, beginning with the Aprima User Conference from August 22-25 in the Dallas area. I hear that’s a fun one, but have never been able to make it work with my schedule.

New Hampshire becomes the latest state to expand telehealth services, with Governor Chris Sununu signing a bill expanding the scope of services covered under Medicaid. Previous regulations limited telehealth services to specialists, but the new law mandates coverage for virtual primary care, remote patient monitoring, and substance abuse disorder treatment as long as the patient has already established care face-to-face. The definition for “originating sites” for those face-to-face services has been expanded from medical offices to include “the patient’s home or another nonmedical environment such as a school-based health center, a university-based health center, or the patient’s workplace.” It’s not as expansive as providers might like, but it definitely helps the state move forward. The law also creates definitions around asynchronous telehealth for non-urgent issues, which will help provide services when video visits might not be realistic.

I skim a lot of journals and publications, but have to admit I wasn’t aware of the Renal & Urology News before a reader sent me this snippet: A recent study looked at referral patterns at Wake Forest School of Medicine and found that patients with rare genetic conditions might be more likely to refer themselves to an academic medical center based on information they find on the Internet. The authors noted that primary care physicians might not be aware of certain rare conditions, so “If patients suspect a rare disorder that is undiagnosed by their physicians, actively pursuing self-diagnosis using the Internet can be successful.” Dr. Google, take note.