CMS will reopen the submission period for EHR hardship exceptions through November 30, 2014. Valid circumstances are vendor delays in providing 2014 Edition CEHRT and the inability to attest via the 2014 CEHRT Flexibility Rule. They didn’t give a reason, but it’s probably because their attestation system wasn’t working and providers were going to be penalized for another CMS technology screw-up.

From Zephyr: “Re: Ebola. Epic is hosting a conference call Wednesday to allow users to share strategies for screening, notification, and management of communicable diseases.” Unverified, but I think all ED system vendors should consider doing this. Epic has a vested interest since it was called out (correctly or not, depending on which hospital press release you believe) by Texas Health Resources, which owns the hospital that discharged an Ebola patient from its ED due to poor communication of his stated recent visit to Liberia.

From Doppelganger: “Re: MU. We are an EH trying to attest since July for Stage 1 Year 2 for the period April-June 2014. We first attested under Medicaid for 2012, then Medicaid and Medicare in 2013. There’s a bug in the CMS website – they think we’re in our third year of attestation, so we must be on Stage 2. I’ve heard this is happening to everyone who attested under Medicaid for 2012 only. CMS said the bug would be fixed on October 1. It still isn’t and my CFO wants his ‘free’ money!” CMS seems to be struggling with its websites these days, so I’m sure others are having the same problem. 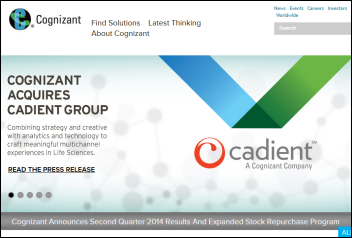 Rock Health runs an interesting interview with a Goldman Sachs healthcare IT guy on doing IPOs. A good quote: “Being public—not just going public—can put you in a very powerful position as you continue to build your toolset and maximize its importance in the world. But the process is time intensive and distracting, so always be objective and sober about it. Maintain control and don’t let the euphoria and momentum of the IPO process carry you away such that you later wish you had spent time continuing to innovate and build the business rather than focusing on the IPO.”

Hewlett-Packard will split into separate companies, one (Hewlett-Packard Enterprise) focusing on enterprise hardware and services and the other (HP) on PCs and printers. 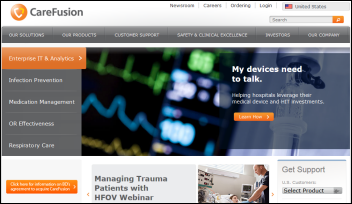 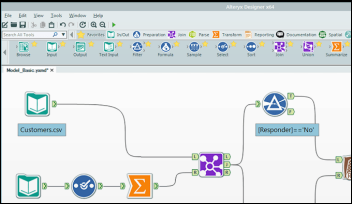 Alteryx, which offers software that allows minimally technical users to create workflow-driven applications from data sources, raises $60 million in a Series B round. The company, which partners with Tableau and QlikView, offers a 14-day free trial download.

United Physicians (MI) will roll out Wellcentive’s population health and risk management solutions to cover all its patients.

GE Healthcare President and CEO John Dineen resigns effective immediately to “look at new leadership opportunities outside GE.” He will be replaced by SVP of business development John Flannery.

Sean McDonald, who founded the Pittsburgh-based hospital pharmacy robotics vendor Automated Healthcare and sold it to McKesson in 1996, leaves his CEO job at Precision Therapeutics.

XIFIN will use SyTrue’s terminology as a service to improve pathology services billing and to ease the conversion to ICD-10.

Surescripts integrates its CompleteEPA medication prior authorization system with Epic.

T-System releases system-agnostic Ebola patient screening tools that are free to all providers. 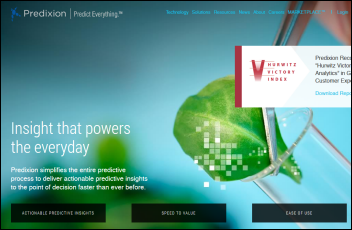 Medicare will change its five-star rating system for nursing homes after news organizations questioned the validity of self-reported data. Among the changes will be mandatory quarterly electronic submission of payroll data to verify staffing levels and an auditing program to validate quality measures ratings.

The VA, following up on its investigation of long wait times, fires three health system directors and its chief procurement officer. One of the fired directors announced his retirement four days before his termination was made public, which the chairman of the House Veterans’ Affairs Committee called, “semantic sleights of hand.” The procurement officer was fired for inappropriately influencing a contract award and then trying to block the resulting investigation. 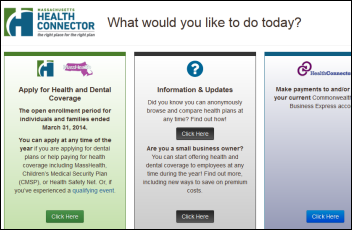 Massachusetts Governor Deval Patrick says the state’s health insurance exchange has been fixed for $26 million and a total cost of $254 million, far les than the $600 million total that a think tank had estimated last month. 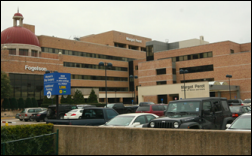 A Texas Senate committee is holding hearings into how Ebola patient Thomas Duncan ended up at Texas Health Presbyterian Hospital and why the hospital’s ED discharged him even though he was feverish and told the nurse just came back from liberia. 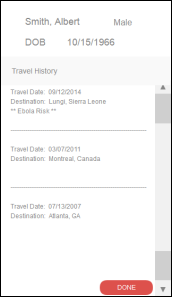 Orlando Portale, president of Health Innovation Partners, mocks up an Ebola early warning app for hospital EDs that would connect to the system in which the US Department of Customs & Border Protection records the itineraries of travelers entering the US. if the government authorized access its system, doctors could review the patient’s travel history by entering the patient’s last name, gender, and date of birth. Sounds like a great idea other than the inevitable privacy objections that would arise from having the visit plans of foreign travelers available outside of the government.

A Brigham and Women’s Hospital EHR review finds that doctors experience “experience fatigue” later in the day and are 25 percent more likely to inappropriately prescribe antibiotics late in their shifts. As if that’s not bad enough, the study found that doctors often ordered antibiotics questionably even when they weren’t tired, about 30 percent of the time. 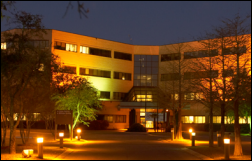 Ochsner Health System (LA) announces that it is the first site to integrate Apple HealthKit with Epic, bringing in weight from wireless scales to monitor home patients for congestive heart failure. I cringed when I typed “weight” since I recall my physics professor adamantly declaring that the correct term is “mass.”

An Exconomy review says there’s not much evidence proving that digital health improves outcomes, but it’s not reasonable to withhold clearly beneficial technologies while waiting for the perfect study to be performed. The best quote is from Joe Kvedar, MD of Partners Healthcare’s Center for Connected Health, who says its tough to get insurance companies to pay for apps for conditions such as smoking cessation where the medical cost benefit won’t be realized for years, possibly after the patient has moved on to another insurer. “That’s why so many companies say they’d rather make a cute thing to put on your wrist, make some money, sell it, and move on to the next thing.”

University of Michigan gets a $1.6 million AHRQ grant to study how clinicians use EHRs, email, and pagers and how those systems can be set up to reduce communications failures.

Several high-end restaurants in Los Angeles are tacking on a 3 percent dinner tab surcharge line item to cover the cost of providing health insurance to their employees. Some patrons are complaining that, like other costs of running a business, the extra fee should be built into menu prices, but the restaurants argue that their leases and insurance are priced based on gross revenue and 3 percent wouldn’t cover it by that method. Some of the restaurants agree that it doesn’t make sense to pay servers nearly nothing and force them to live on tips, so they’re considering adding an all-inclusive service fee. 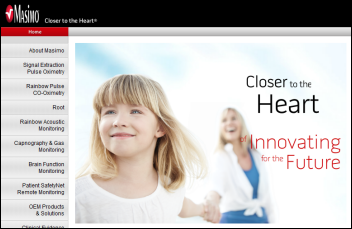 Masimo Corporation, which flashily launched a patient safety foundation last year with an on-stage appearance by President Bill Clinton, is found in a ProPublica investigative report to have been reprimanded by the FDA for failing to respond adequately about complaints about the safety of its own medical devices. An expert who reviewed the agency’s findings found it troublesome that the company challenged a complaint about a device’s alarm system involving a patient death, adding, “When a company refuses to respond in any way to the FDA other than to say that the FDA is wrong on every issue, that’s not very credible.”

Health Catalyst puts out a good video called, “If Restaurants Were Run Like Hospitals.”

Researchers looking at Beth Israel Deaconess Medical Center’s patient portal usage through 2010 found that patients sent an average of about one email every other month per patient, with about a fourth of all patients signing up for the portal and a third of those (8 percent of all patients overall) sending at least one message to their doctor. Physicians received about one email per day. The authors conclude that physicians should be required by their job descriptions to respond to patient emails. That’s interesting, but the information is awfully old and the conclusions are questionable as a result.

Walmart will allow in-store shoppers to compare and select health insurance plans, adding that the company’s goal is “to be the number one healthcare provider in the industry” and that the foot traffic will allow it to sell customers prescriptions, non-prescription medications, optical services, and retail clinic services. The company also announces that it will stop offering health insurance to the 30,000 of its employees who work fewer than 30 hours per week, meaning those employees will lose their 75 percent Walmart premium subsidy.

Weird News Andy is amused by PitPat, a Bluetooth-enabled exercise tracker for dogs. WNA adds that the cat version would be locked on 99 percent sleep.