I’ve run reader-provided hints over several months that Allscripts EVP/CTO John Gomez was planning to leave the company. That became official on Wednesday, when Allscripts announced his resignation, effective May 31. He’ll be available to the company for 18 months afterward as a consultant. An internal e-mail from CEO Glen Tullman says that Gomez wants “to focus on a number of areas outside healthcare and perhaps running a company himself.” Allscripts shares dropped 6.8% on Thursday following that news and a downgrade by Auriga, which expressed concerns about his resignation, the level of attrition of Eclipsys employees after the acquisition, and recent KLAS rankings of the Allscripts Enterprise ambulatory product.

I’ve been planning to use quick polls to gauge industry reaction to major news, so here’s your first opportunity to weigh in. Feel free to vote and add your comments.

From Year of the Cat: “Re: John Gomez. This could really hurt Allscripts. It’s a very sad day for HIT as one of its most innovative minds exits.” He was arguably their least-expendable employee, at least to anyone interested in the former Eclipsys Sunrise and how it will integrate with other Allscripts products. I hope he’ll stick with the industry in some capacity. It wouldn’t surprise me if he doesn’t start his own company since he’s entirely capable, he has great vision, and his developers have always been able to run circles around just about everybody else’s.

I mentioned using polls to get a quick read on industry reaction to major news. I’d also like to get comments from a fixed group of readers like Dr. Jayne does with her Medicine Cabinet. When something big happens, I would e-mail that group and ask for their comments, which I would then run (anonymously) at the next opportunity. If you are a provider CIO, CMIO, or other provider C-level reader and would like to participate, let me know.

I see that CCHIT’s Sue Reber, writing for the organization’s EHR Decisions site, mentions my January 2006 editorial that I ran here recently called CCHIT Should Provide More Information to Purchasers. She even found humor in my making fun of their name almost before the ink was dry on the incorporation papers (“whose phonetic sounding-out always gets yuks from the watercooler crowd”) by adding her own observation that it is “an elegant name with initials not even a mother could love.”

MyHealthDirect closes $4 million in a Series B investment round. Arboretum Ventures and Chrysalis Ventures provided the funds, which will be used to expand sales, client services, and technical resources. The company’s Web-based solution allows hospital EDs and other high-acuity providers to search open appointments in the community to generate a patient referral.

CVS Caremark signs a deal with Advocate Health Care and its physician group that will install Advocate physicians as medical directors in 23 MinuteClinic locations in the Chicago area and Bloomington, IN. The organizations will integrate their electronic medical records systems. 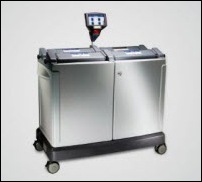 CareFusion acquires Vestara for $17 million. The Irvine, CA company offers a drug disposal system that reads drug NDC bar codes and provides advice on how to dispose of the products to conform with all laws and regulations. CareFusion will rebrand the offering as Pyxis EcoStation.

Allscripts will outsource its Sunrise hosting to Xerox subsidiary ACS in a 10-year, $500 million deal. Allscripts expects the business to grow rapidly and needed outside expertise to manage it. My insiders tell me that Allscripts did a good job in being fair to their existing employees so that they’ll be offered their same jobs, pay, and benefits by ACS. While ACS will run the operation, an Allscripts governance team has control. The only casualties so far appear to be some members of the Allscripts remote hosting management team, with a couple of folks already gone. In an interesting twist, Allscripts remote hosting personnel in India are being told they will be let go if they don’t find another position within the company since ACS will not be using offshore resources. I mentioned on January 21 that ACS was being brought in for a role somewhere between oversight and total outsourcing.

Open source software vendor Mirth Corporation launches its InformaCare care management platform for Patient Centered Medical Homes and ACOs. It originally developed the cloud-based product for Pfizer more than ten years ago for Florida community projects and has licensed it back for a wider release.

Nuance names Stefan Herm as VP and managing director for Europe, Middle East, and Asia. He comes from McKesson, which of course amused me endlessly since his last name is the same the acronym for Horizon Enterprise Revenue Management.

“The eHealth boondoggle continues,” according to one Canadian official voicing his objection to the the $673,000 paid to former health deputy minister Ron Sapsford in 2010.

UK Secretary of State for Health Andrew Lansley says fast broadband will improve NHS’s quality and efficiency by enabling greater use of telehealth, mobile computing, and access to information.

Proposed legislation in New York would require Medicaid recipients to have their palms scanned to receive services, saying the identification technology would cost $20 million to implement but would save $5 billion a year while being no more intrusive than electronic toll road payment systems. The state dropped a finger scan requirement in 2009.

A four-member Brigham Young University team makes the finals in Microsoft’s Imagine Cup 2011 student competition with their ultrasound application. It allows physicians to download images and them move them to the cloud for collaboration, lowering the cost of medical imaging so that third-world countries can afford to use ultrasound technology. They built their prototype for less than $8,000 using a Microsoft tablet and an ultrasound probe. You can vote for them (or one of the other healthcare-related entrants) here. 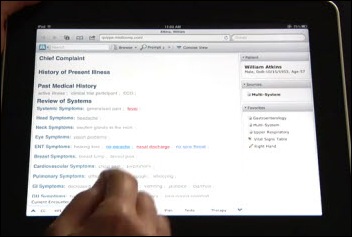 Medicomp has created an online demo of its MEDCIN-powered, browser-based, iPad-ready Quippe EMR documentation system. Sign up and you can play around with it online, provide feedback, and keep yourself busy until the software development kit comes out next month.

Skype has many uses, including for telemedicine and allowing overseas military personnel to watch their babies being delivered stateside. Still, I found this fascinating: police officers are using it from their patrol cars to connect with judges to get warrants issued, especially in time-sensitive cases such as DUI where blood alcoohol levels need to be drawn quickly. One of these days I’m going to sit down and make a list of potential healthcare uses (like checking drugs remotely, walking someone through a procedure, etc.)

Verizon and MEDfx launch a Richmond, VA-area pilot program in which a medical practice scans the paper documentation of diabetic patients and sends it to a physician portal for widespread access. The practice, Dominion Medical Associates, is still paper-based, so the records can be printed and stored in their charts and later migrated to an EHR. The project uses both The Direct Project and NHIN Exchange technologies from ONC.

From KLAS: one out of five community hospitals will switch EMR products within the next couple of years. McKesson and Meditech C/S clients have the highest level of confidence that their vendors will get them to Stage 1 MU by 2013. Healthland and Siemens MS4 clients are the least confident. McKesson was the highest rated vendor, followed by Meditech and Cerner.

Do your patients know or care about IT?

Some patients are openly curious about the system we use and how it integrates with the hospital and other offices. I’ve found, though, that many patients just assume that we’re fully integrated, and because we’re computerized, that I can see everything in every chart of every physician they’ve ever visited.

I remember when HIPAA first came to pass how concerned everyone was about the records release provisions.

(Don’t get me wrong, some consultants still play this game. Even though a release is not required for us to collaborate on the treatment of a patient, they demand one before sending consult letters. That’s usually the last time I’ll send a patient to one of those types, unless they are something really special in which case I’ll call them personally and re-educate them on HIPAA and what a pain their staff is causing).

What struck me funny at the time was that patients already thought we had all the information, whether from an active consultant or from an old chart 15 years ago. Many had no concept of what HIPAA was designed to do or how it would impact access to information. When asked to sign releases, they were surprised to learn that we didn’t actually have everything at our fingertips.

If I thought the desire for information sharing was high then, it’s even higher now. With the advent of Web-based patient portals, electronic refill requests, e-visits, and more, the expectation on many fronts is that we have 24×7 access to the patient’s chart.

When seeing colleagues’ patients in the hospital, physicians used to be able to plead ignorance because the paper charts were locked up at the office. Now patients expect cross-covering partners to have in-depth understanding of what’s been going on with their care. Although a bother to some of my peers, personally, I think this is a really, really good thing.

I remember being petrified taking weekend call, having to talk to my partners’ patients and knowing absolutely nothing about them. Now, I can keep my secure VPN connection and pop into the EHR when someone calls at 4:30 a.m. with questions about whether they really need to go to the Emergency Department or whether they can wait until the office opens in the morning. Those of us who use nurse triage services can allow them to have limited access to charts. Reducing the number of people in the Emergency Department who don’t actually need to be there is a significant cost savings, which all of my patients definitely care about.

Ten years ago, I was one of the first in my area to trade e-mails with patients. At that point there wasn’t a tremendous interest in it and we actually ended up stopping. (Despite the Mother of All Disclaimers, patients e-mailed inappropriately about urgent issues and the hospital felt the risk was too great).

These days, many health systems and private practices are marketing their services around technology and improved access to physicians and care teams. And if you’re still not convinced that patients care about IT, check out the video below.