From SpaghettiCode: “Re: GE. The recent reorganization confirms that they made a huge mistake with the $1 billion IDX acquisition. After many attempts to defibrillate the CareCast business, they finally orged the legacy business under the EMR side and key execs were moved out.” Here are snips of what I had to say about the acquisition in September 2005. I mentioned collaboration with Intermountain Healthcare as a positive (that’s gone nowhere that I’ve seen), although I was focused mostly on the inpatient apps:

If you’re an optimist, you might assume that a mega-conglomerate like GE will pump R&D into the old warhorse IDX products, make them wonderful in a way that a small player like IDX never could … Pessimists would ask for even one example where that has ever happened, including with prior GE acquisitions … Much of CareCast was written 20 years ago by that little band of Phamis employees in Seattle. Does it contain enough intellectual property or technical excellence such that a quick spit-and-polish treatment will make it a world-beater? I don’t think so, but maybe GE does … Conglomerates have a way of screwing up products (McKesson, Siemens, and maybe even Misys.)… IDX needed a white knight. It was devaluing itself day by day, with an embarrassing UK performance and no CareCast sales. The acquisition announcement mentioned that IDX needed a partner with global reach, but it had already created its own opportunity in the UK and blew it. Cerner and Epic were threatening to run the table on them … Somehow HIT companies seem to lose their passion when swallowed up by multinational firms selling everything from light bulbs to Jay Leno. That’s kind of sad, don’t you think?

From Boston Patient Advocate: “Backlash is building by patient advocates against self-appointed ePatients who make a living selling a modified version of their story. They often fail to mention that they misunderstood information they found online, weren’t really as sick as they thought, or that it was their doctors that found the correct treatment or gave them an RX for online communities. Then again, we love myths of the little guy in America.” I ignore news stories in which reporters try to mask their opinionated reporting with phrases such as "debate rages”, “some are questioning”, or “pressure is building”. In other words, I don’t doubt your sincerity, but I’d like to know specifics behind your “backlash is building” assertion. As we say in the medical world, “In God we trust … others bring your data.”

Eastern Maine Medical Center (ME), preparing for a three-day lockout of striking RNs by bringing in replacements, will shut down all of its clinical systems except the eMAR and go back to paper. Here’s a hint for those living near Bangor: go somewhere else if you’re sick this weekend. Or, if you’re one of those “EMRs are evil” naysayers, this is your rare chance to do some Maine-based medical tourism to receive critical, elective medical care at a paper-based hospital.

The usual list of stuff you can and should do here: (a) subscribe to the updates so you aren’t embarrassed by the idiot three offices down who learns breaking news before you and rubs your nose in it; (b) use the search function to amplify your HIT intelligence in real time; (c) Friend or Like us on Facebook or connect with us on LinkedIn so that we may both pretend to be more popular than we probably are in real life; (d) click some of the sponsor ads to your left to see what they’re up to; (e) visit HIStalk Practice and HIStalk Mobile to get mostly different news particular to physician practices and mobile health, respectively (and sign up for those updates, too, if you want to stay on top of stuff).

Listening: the remastered 1978 debut solo album of former Pink Floyd leader David Gilmour, recommended by a reader. I appreciate that: I really like his music and respect him for his charity work, but I never think to recommend his solo stuff, which at that early stage of his career was kind of Pink Floyd Lite (not necessarily a bad thing). He’s supposed to be reuniting with former bandmate Roger Waters at one live performance of The Wall, which is on tour now. 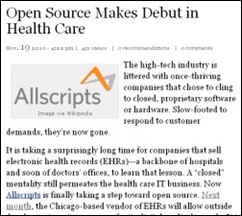 Forbes runs maybe the weirdest, worst HIT article I’ve seen, apparently intended to be a cheerleading piece for Allscripts. It claims that open source is about to make its healthcare debut, courtesy of Allscripts (meaning Allscripts Helios, previously Eclipsys ObjectsPlus, which has been around since the 1990s). It claims that many tech vendors have gone out of business because they “chose to cling to closed, proprietary software or hardware” (care to share names and proof of the cause of their demise?) It mumbles something about the need to interface a “computerized drug order system” to an EHR (huh?) It says Judy Faulkner’s statement that you can’t mix and match vendors is an Allscripts advantage, failing to notice that Judy’s company (whose industry-leading product is closed and proprietary) had pretty much killed Allscripts (nee Eclipsys) Sunrise single-handedly since to install Sunrise, unlike Epic, required mixing and matching vendors to cover the many hospital areas it doesn’t address. To top it off, the article uses the old Allscripts logo pulled from Wikipedia instead of actually checking their site directly to get the current one. All of this was a lame attempt to create an interesting, insightful article around an October press release in which Allscripts announced that it would create an apps store for the former Eclipsys Sunrise, which has nothing to do with open source in the first place since nobody’s seeing and contributing to anybody else’s source code (extensibility isn’t the same as open source). It’s just amazing to me how many people write authoritatively but wildly inaccurately about healthcare IT (usually spinning entire articles around press releases and a couple of Google searches) who have never worked a day in either healthcare or IT except as a cheap-seats spectator. Caveat lector.

A little more than half of respondents to my poll say they’ve seen “hold harmless” contract clauses, although I liked the excellent comment by NotQuite, who pointed out that a “hold harmless” clause is not the same as a “limit of liability” clause. I’m no lawyer, but that sounds legally insightful. Gotham City CIO requested the new poll to your right, for hospital people: does your organization block access to outside e-mail services by physicians using hospital PCs? They block access to Gmail, Hotmail, etc. at his place to prevent the possible transmission of PHI via untrackable e-mail services, which is apparently common in other industries. The new CEO is getting heat from the docs even though they can still use a dedicated PC in the doctors’ lounge or their own PDAs to get to those services. Feel free to add any comments to the poll that would help our CIO colleague.

Thanks to new HIStalk Platinum Sponsor Orion Health. The international company, based in Auckland, NZ and with US offices in Santa Monica and Boston, offers solutions that include an HIE platform, the Concerto Physician Portal with single sign-on to provide a single patient view across multiple clinical systems, the Rhapsody Integration Engine for inter-system messaging and integration, the Rhapsody Connect solution for connecting to public health agencies, and the Symphonia developers’ messaging system for rapid system integration. The company just reported an 80% increase in revenue for the first half of the year and has 22 HIE sites in 12 countries. In the US, Orion’s HIE solution was recently chosen by the Wayne State University Physician Group and Maine’s state HIE. Rhapsody 4 just came out with new support for SOA integration and Web services, with Philips choosing it as its integration tool. The company offers a much broader product line than I knew about (EHRs, registries, whiteboards, bed management, chart deficiency, etc.) so feel free to cruise over to their site to learn more. Thanks to Orion Health for supporting HIStalk.

Marty Mercer is putting together a HIT sales training class for newbies and is looking for input from industry long-timers. You can help out by completing his short survey like I did. He’ll send me the results afterward since I think they might be fun to review here.

Inga emulates Weird News Andy with this link: doctors warn of the psychological dangers of social networking after an 18-year-old boy’s asthma attacks are found to be triggered by looking at the Facebook profile of his former girlfriend. His mom measured his peak expiratory flow before and after.

The Rural Nebraska Healthcare Network starts construction of its Nebraska panhandle fiber optic network that will connect nine rural hospitals and their clinics.

A company that has developed an electronic parking space finder wins at the IBM SmartCamp World Finals in Dublin, but a couple of HIT-related companies were in the hunt: CareCloud (Web-based practice management and revenue cycle tools for practices) and Sproxil (checks the authenticity of drug products via SMS messaging, primarily in developing countries).

Speaking of “cloud”, everybody’s hopping on that bandwagon with as much self-serving enthusiasm as they did previous sloppily defined fad terms (ASP, EHR, clinical transformation). Since HIStalk runs from a Web host, I think I should start referring to myself as a “the leading cloud-based business intelligence and collaboration platform for the healthcare technology and life sciences sectors.” I’m thinking investors will line up at my door dripping saliva at the chance to throw money at me.

St. Paul Heart Clinic (MN) closes its doors, with its 36 cardiologists going to work for either Allina or HealthEast. A key reason, as explained to patients, was the ability to share a common EMR.

Weird News Andy likes this story: the call center for TennCare is a women’s prison, as discovered and reported by the overly dramatic and pot-stirring local TV station anxious to use that “breaking exclusive” graphic typically rolled out when someone’s flat tire backs up traffic almost a quarter mile. WNA likes the eloquently expressed consternation of one Leon Rippy, apparently goaded randomly by the TV station to weigh in on the issue of the potential but entirely theoretical impact on patient privacy: “That ain’t good.”

Coliseum Hospital (GA) investigates a former employee who dropped by to attend a nurse’s birthday party, then logged into the hospital’s computer system with her still-active password and looked at patient information. She’s caught by hospital security, which was apparently more effective than IT security considering the terminated employee’s credentials had not been inactivated. Assuming HR let them IT, of course (and trusting the competency of any hospital’s HR department is indeed foolhardy).

A blog entry in The Economist says HITECH could be as big a bust as NPfIT in the UK, suggesting that France provides a better model:

Maybe the Americans (and the British) should swallow what the French would term their “Anglo-Saxon” arrogance, and look at France. A French citizen presents his credit-card sized Carte Vitale to the doctor or the pharmacist or the hospital and everything—for example, the date and dosage of a prescription—is recorded by a national computer system (which also usually deals with payments). Visit another pharmacy or doctor in another town, and the patient’s details are automatically available. Perhaps this helps to explain why the World Health Organisation in 2000 (the last time it did the exercise) put France at the top of its rankings for health care. By contrast, Britain came 18th and America 37th. Mind you, it may also explain why the French pop more pills than anyone other than the Japanese.