From HITGhost: “Re: Aspyra. It voluntarily delists itself from NYSE Amex.” The market cap of the LIS/PACS vendor is down to $1.4 million, so obviously it’s not worth the administrative cost to stay publicly traded.

From UKnowMe: “Re: Accenture. I hear that Accenture is eliminating its healthcare practice over the next 2-3 months and will be releasing 300-400 people. Can anyone confirm?” I haven’t heard that, but Accenture just launched the Center for Health. I never know what a company or university means when it announces a “center” that doesn’t seem to involve new people, new facilities, or anything more than a new marketing campaign and maybe a new suit or two, but it happens all the time. Here’s another one: IBM is opening a Health Analytics Solution Center in Dallas, which one of its people says is related to Dell’s Perot acquisition.

From Weird News Andy: “Re: brain surgery. Being in Britain, the patients did not have to pay through the nose for this procedure.” Surgeons are removing skull base tumors through the nose, with one patient leaving the hospital just to days later. Just in case this doesn’t impress, the newspaper article gives a graphic description of the alternative: “Previously, neurosurgeons would have had to split the facial skeleton or peel back the scalp and remove the skull on the forehead to complete the same operation.”

In Britain, a member of Parliament wants to know the cost of iSoft Lorenzo at early adopter sites, saying the number could run anywhere from hundreds of thousands to even millions of pounds per concurrent user. Richard Bacon says Lorenzo isn’t providing value and Cerner Millennium “has caused absolute havoc.” On the other hand, the arguments seems largely political.

HIMSS continues its acquisition of other member groups, this time taking over the Medical Banking Project (HIMSS always calls it “unification with” the group it takes over). Its membership is a bit company-heavy with 163 individuals and 42 corporate members. The only employee mentioned is its founder, from whose home in Franklin, TN it is apparently run. I could find only one reference that called it a non-profit, with its own materials describing it as “a self-funded policy research firm.”

CHIME awards Ivo Nelson, chairman of Encore Health Resources, its Lifetime Achievement Award. I couldn’t find a link for the press release that someone sent me. 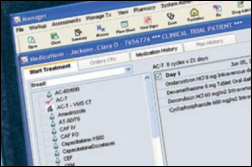 A radiation oncologist says Varian’s linear accelerator sales should increase in an economic recovery, but its clunky ARIA oncology EMR is a dog that might hold it back. In his words, “ARIA is far too complex and does none of the simple everyday tasks well. Obviously written by an engineer with little clinical input from the end users, ARIA is a major physician dissatisfier, as they find daily tasks much more time consuming.” Just what you want your doctor to be struggling with as they’re treating you for cancer. If you agree with his opinion, that is.

In all the Charlie McCall talk, I shamefully neglected to observe the October 18 11-year anniversary of the announcement that McKesson was buying HBOC. I editorialized about his first trial back in 2006, with this shout-out to the neglected McKesson shareholders who got burned the worst: “Among those involved were certainly some crooks and some fools, but let’s not forget those who suffered most, those McKesson lifers who had stashed away years’ worth of shares of their unexciting company’s stock instead of risking it on flaky enterprises like Microsoft and Dell. When lonely old conservative widower Dad McKesson brought home a sexy young step-mom named HBOC, she stole the kids’ piggybank.”

Cerner announces Q3 numbers: revenue down 3%, EPS $0.57 vs. $0.54, falling short of revenue estimates. System sales were down 14% and global revenue was down 23%. CERN also guided down on Q4 revenue. Neal actually chimed in at the end of the conference call.

A little recognition for HIStalk’s Founding Sponsors: Medicity and Nuance. Medicity has started a rather cool HIE Blog, I notice, that unlike the usually crappy corporate “blogs” that have “posts” written by chipper marketing types that don’t even claim to be written by executives, Medicity’s is the real deal. Included are posts from one of the smartest people I know in the biz, Robert Connely. Both companies (eScription, in the case of Nuance) were among the sponsors of HIStalk back when I was writing it with a chisel on stone, so I ought to thank them a little more often.

Allscripts used to own the domain escripts.com but let it lapse, so it went up for auction this week. There were no takers at the expected range of $10-25K. On the other hand, medicalpractice.com went for $9,000, conciergedoctor.com fetched $1,250, and h1n1fluvaccines.com was bought for $1,000.

I e-mailed the Canadian medical device licensing people about classifying EMRs as regulated devices. I appreciate this response:

According to the US FDA’s interpretation, a medical device is “intended for use in the diagnosis of disease or other conditions, or in the cure, mitigation, treatment, or prevention of disease, in man or other animals.” It almost sounds like software vendors in Canada recognized their own products as medical devices and had them evaluated as such, but US vendors have staunchly argued that their products aren’t covered. Software that displays or manipulates lab results, provides diagnostic suggestions, or manages drug therapy seems to fall into the broad category as laid out by FDA.

Ten software developers in Rwanda who work on the OpenMRS EMR graduate from an 11-month course called e-Health Software Development and Implementation, part of the country’s effort to transform itself into an IT hub.

The Center for Connected Health and Mass General buy a Tandberg telepresence videoconferencing system for telemedicine. I thought they dealt more with home medical sensors and monitoring, but maybe the mission has changed. 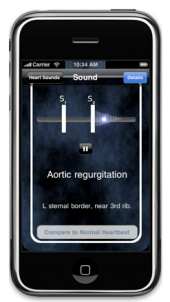 A med student and his programming partner (isn’t that who always creates medical apps?) develop iMurmur, an iPhone-based learning tool for heart murmur. It has sold 15,000 copies to users in 35 countries, pushing its price from 99 cents to $2.99 and leading to its acquisition by a digital stethoscope company. 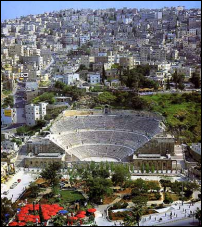 The King of Jordan hosts hosts a public demo of its VistA system, implemented by Perot and the non-profit Electronic Health Solutions. Jordan is creating a VistA educational program to make itself self-sustainable.

Half of the doctors responding to a British survey say they are too busy typing into the computer to look patients in the eye. One doctor said, “The demands of the patient’s agenda, the Government’s agenda and the requirement that everything I hear, say and do must be meticulously recorded make for an extremely crowded consultation.”

John at Chilmark Research finds interesting facts about the Dossia PHR. After they parted ways with Omnimedix and hooked up with the Indivo platform from Children’s Boston, they found that Indivo wouldn’t scale, so they had to rewrite it. John outlines other problems they’re having. One I’ll add is that PHRs aren’t exactly lighting up the skies and Google and Microsoft are formidable competitors for what little interest there is.

Odd lawsuit: welfare recipients in Michigan file a class action lawsuit against the state for not paying for adult dental benefits. The state is broke, of course.

Also going broke: California, which paid $2.1 billion in overtime to state employees last year. One state hospital nurse made $733K in overtime in a five-year period, while two other nurses at the same hospital made $132K each per year, twice their annual salary.

The US Postal Service finds CalOptima’s missing CDs that contained unencrypted personal data on 68,000 members. The package landed in a secure postal facility in Atlanta and the disks appear to be intact.

GE Healthcare’s Medical Quality Improvement Consortium (MQIC) is submitting anonymous clinical data to the CDC to provide H1N1 tracking information. MQIC is a repository of de-identified clinical data captured from GE’s Centricity EMR users. Every 24 hours, MQIC is forwarding updated data that’s been collected from 14 million record patient records. Great use of EMR data, though I wonder if the patients (and/or providers) are aware their de-identified clinical data is being used for this purpose. Or if they need to know. 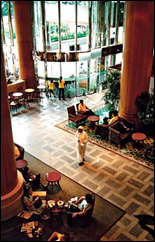 Would you be more willing to travel to Thailand for surgery if you knew the hospital was using Microsoft HealthVault to document your treatment? Me neither. Hospital officials at the Bumrungrad International Hospital in Bangkok seem to think it will add to their appeal. I believe the $5,000 knee replacement that would cost $50,000 at home is still the bigger draw.

API Healthcare announces that seven new hospitals have signed on for its human capital management solutions.

I love my iPhone, so I was not surprised to learn that 99% of all iPhone users are happy with their smart phones. In fact, we are two times more likely than BlackBerry users to say we are very satisfied. I’m not sure I can think of any other consumer product with a 99% satisfaction rating.

Speaking of iPhones, Harvard Medical School launches an application to update consumers with the latest H1N1 flu virus news, including tips for shaking hands or other body parts to avoid the spread of virus. (Do people seriously do this?)

GE expands its healthymagination campaign, launching a new e-health business unit that is focused on connectivity among providers, hospitals, and patients. While the announcement suggests that GE is jumping into a brand new world, the core products sound familiar: LifeSensor PHR, Centricity HIE, a clinical portal, and master patient index technology. I guess GE wasn’t too concerned over the use of “eHealth”, even though the folks in Ontario sort of sleazed up the name.

A Florida man opens his mailbox and finds an envelope containing medical records of over 70 people. The full chain of events is unclear, though a postal employee or two seem partly at fault. Just a reminder that while we might one day have fully secure EMRs, we’ll never rid the world of stupid (lazy?) people.