From Scott: “Re: Joint Commission and nondisclosure. Yesterday’s Sentinel Event Alert provides further support for providers’ rejection of vendor nondisclosure clauses that could limit the sharing of information on software problems that have patient safety implications. The Joint Commission’s previous Sentinel Alert, Safely implementing health information and converging technologies, is also worthwhile reading for providers who might rush to deploy EHR systems in response to federal incentives.” Joint Commission should be all over healthcare IT in the context of patient care. It would give customers a way to collectively pressure their vendors (with regard to design and disclosure, for example). For vendors, it’s still better than having the FDA in your shop. For patients, Joint Commission is the one group that looks out for their best interests as a package, not just how technology is deployed and managed in a vacuum. And unlike HIMSS and its spawn, they have no vested vendor interest.

From Billy Roentgen: “Re: Stanford. Stanford is going live on Epic September 1, replacing Siemens Invision. Palo Alto Medical Group is going live on Epic at about the same time, replacing IDX. Epic is EVERYWHERE, starting in the physician’s office and carrying through to the hospital.” It’s easy to see with 20-20-hindsight why Epic owns the markets they choose to play in: (a) they built new products that reflected that inpatient-outpatient continuum while their competitors kept bolting on marginally useful features and acquisitions onto old platforms that were clearly unsuited for them; (b) they created MyChart before anyone cared about sharing data and PHRs; (c) they didn’t get bogged down in a Viet Nam of unsuitable customers by selling indiscriminately to just anyone; and (d) they ran their implementations firmly and protected customers from their own success-sapping indecision. Nobody else is even close, handing over the entire upper-end market to Epic without much resistance. Cerner had a shot but doesn’t seem to be selling much new business, while the reps from GE, Siemens, and McKesson might as well carry a white flag when they visit hospitals of more than 400 beds. Eclipsys is strong in the traditional inpatient core of CPOE, pharmacy, and nursing, but won’t get a foothold with customers who want a broad application line that covers outpatient in a single database. Epic owes its success to weak competition as much as anything else. In a perfect world, someone would step up to offer an Cadillac alternative, but for now, Epic is running its own Cash for Clunkers program (they get the cash).

From Joce: “Re: Logi-D. Heard a rumor that Stanley InnerSpace might have entered into an agreement to acquire Logi-D. Any truth to this?” I’m probably the wrong guy to ask since I don’t follow either company. Stanley makes carts and cabinets, Logi-D is a Canadian logistics consulting company specializing in the OR.

From The Nuge: “Re: claims. The reader’s comment hit the nail on the head, but that’s only a small part. Look at what happened with Emdeon and Aetna a few years back when they went exclusive (how can that even be legal?) Misys couldn’t send electronic claims to them for months! And what when PCN bought Versyss, declared bankrupty (iirc), was picked up by Medical Manager for pennies, and sold zillions of ambulatory claim events to WebMD? Very well orchestrated.” 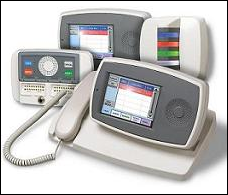 From Kwame Mojito: “Re: GE. The nurse call group (formerly Dukane) has been sold internally from GE Security to GE Healthcare under the clinical systems division. It will be interesting to see if they can tie this into their Centricity product in a useful manner. To my knowledge, this will make GE the only EMR vendor who also owns a nurse call system.” And a theme park.

From Curious George: “Re: OSHA. I hear that hospitals are definitely on their toes in case an OSHA inspector drops in for a chat. Do you have any information on how many physician clinics are being targeted by OSHA? Have you heard of anyone who has and what their top five non-compliant issues were?” I’ll take a lifeline. Anyone? 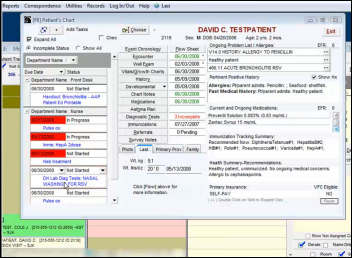 From Ditka: “Re: sales. Greenway, according to a sales rep, is having the best year of their lives. Office Practicum is a small peds EMR with rabid fans and their pendulum is swinging mightily up. I keep seeing eCW everywhere. I’ve run into a bunch of e-MDs sales.” I had not heard of Office Practicum – looks cool (although I’d get those old TEPR awards off the front page). None of the others you listed are surprises.

From Norberg: “Re: sales. What can I say? It’s slow. The problem is that most organizations are almost singularly focused on ARRA. And because of the ambiguity around meaningful use, they’re doing nothing. I would hazard a guess that imaging and all other ancillary (read: non-EMR) solutions are not being given any attention / considerations by providers these days. If it’s not related to ARRA, it’s not getting done. If you’re the incumbent vendor at a facility, it’s probably high cotton for you there. But you can’t even get a meeting at a facility where you’re not the incumbent HIS/CIS vendor. I have some friends in the indy EMR space and they say they’re doing pretty well. I guess there are enough independent practices who are buying that the top 3-5 vendors are making out OK. But the large , monolithic vendors are struggling.” 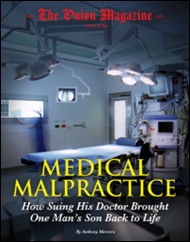 A funny phony magazine cover from The Onion. Some good headlines: Researchers Quietly Chuckling At Placebo Group, Congress Deadlocked Over How To Not Provide Health Care, U.S. Government Stages Fake Coup To Wipe Out National Debt.

Children’s Hospital of Pittsburgh, says KLAS, is the pediatric hospital IT leader, coming in at #1 of the top five. Of course, it’s only the pre-season poll.

HealthPartners (IN) saved $430K in one year with its implementation of Epic and Merge Healthcare, which the local business paper concludes “is providing some proof for health reform advocates who say that electronic medical records can save providers money.” With a payback period that spans generations, I’d say that particular proof isn’t compelling.

A reader tells me his hospital’s Epic contract has no nondisclosure terms. That’s hard to believe given Epic’s legal lock on everything from employment to implementations, but that led me to a sobering thought: what if Cerner is the only company demanding that language in its contracts? Could this medico-legal brouhaha be over just one overzealous vendor’s contracting practices? A Fan was right in the last issue, though — being legally allowed to talk about known patient-endangering software defects is not worth much if (a) the vendor doesn’t tell you about them until you find them, and (b) the customers who are aware of the problem have no incentive or platform to get the word out to other customers (assuming the vendor isn’t doing it). In fact, some of the IT departments I’ve worked in kept the lid on known errors in a manner little different than the vendor themselves and for the same reasons – vanity, lack of resources to address the issue, and condescension toward end users who shouldn’t bother their pretty little heads with computer topics (which is actually sort of true – if you e-mail any of the big clinical departments about a computer problem, they drive you nuts with repeated uninformed questions and a flood of wildly unrelated problem reports that they suddenly observe and decide are related to the one you mentioned).

Intellect Resources is doing a three-question HIT hiring survey of recruiters and hiring managers if you are one of those and want to chime in .

Institute for Safe Medication Practices weighs in with ample expertise on the Ohio pharmacist’s error that killed a child. If you’ve done FMEA or other root cause analysis, it won’t surprise you that the Swiss cheese holes aligned once again. Contributing issues: (a) the pharmacy computer system was down, causing the pharmacist to be swamped; (b) pharmacy staffing was short that day; (c) they were too busy to take breaks or even eat; (d) the technician who made the IV was distracted; and (e) a nurse called to get the IV early even though she didn’t really need it, causing everyone to rush it out without following the usual cautious procedure. ISMP likens sending the pharmacist to jail to Whack-a-Mole: “Marx notes that this child’s game is a telling depiction of how we set unrealistic expectations of perfection for each other and then unjustly respond to our fellow human beings who inevitably make mistakes. We play the game at work by writing disciplinary policies that literally outlaw human error.” The bottom line: nobody’s child is any safer now than that two-year-old was then.

The board of Phelps County Regional Hospital (MO) approves a measure that mandates physician CPOE usage.

An excellent Wired Magazine article makes a point that companies that can turn out “cheap but good enough” alternatives to expensive products can thrive, giving fresh-thinking startups a big advantage over their Goliath competitors who “believe the myth of quality” and fail to see "the rubric of accessibility”.  One example is a Kaiser experiment to put high-tech offices in strip malls. “In 2007, Flanagin and her colleagues wondered what would happen if, instead of building a hospital in a new area, Kaiser just leased space in a strip mall, set up a high tech office, and hired two doctors to staff it. Thanks to the digitization of records, patients could go to this ‘microclinic’ for most of their needs and seamlessly transition to a hospital farther away when necessary. So Flanagin and her team began a series of trials to see what such an office could do. They cut everything they could out of the clinics: no pharmacy, no radiology. They even explored cutting the receptionist in favor of an ATM-like kiosk where patients would check in with their Kaiser card. What they found is that the system performed very well. Two doctors working out of a microclinic could meet 80 percent of a typical patient’s needs. With a hi-def video conferencing add-on, members could even link to a nearby hospital for a quick consult with a specialist.” Makes perfect sense to me. Wouldn’t electronic triage be a lot more efficient and convenient to all involved?

This can’t be entirely good news: iSoft will lay off up to 100 technical employees in England, but brags it will offset that by hiring up to 50 salespeople.

Odd: PACS vendor UltraRAD gets an FDA warning for “failure to validate computer software for its intended use.” The software that drew the warning: Microsoft’s SharePoint portal and the HEAT help desk system.

The VP of human resources at St. Joseph’s Medical Center (CA) is indicted for paying no income taxes in the past 12 years, also charged with altering the hospital’s computer records to reduce her withholding.

My last poll found that the employer of 18% of respondents is using Skype for some business purpose. Pretty interesting, although now the obvious question is “for what?” New poll to your right for providers: how good are your vendors of clinical systems at notifying you of patient-endangering problems and getting them fixed fast?

The VA is soliciting proposals to build a San Diego-based Emerging Health Technologies Advancement Center. Projects to be conducted there involve identity verification, interoperability, and developing an interface for patient consent directives.

Raj Dharampuriya, one of the founders of eClinicalWorks, is interviewed by India Knowledge @ Wharton. He mentions that the company has opened a Mumbai support center to handle US customers that run 24 hours a day, such as a prison. The company will hire 500 people in the next two years, most of them in implementation and support, and will open an office next month in San Francisco. He credits the Indian culture of the founders in helping them focus on their goal of building a business and changing the delivery of healthcare. He still practices medicine part time and says he’s in the top 10% of performers according to BCBS.