From Andy: "Re: Hey, Sexy Guy …" Link. The AvMed HMO sends out membership cards inadvertently listing the customer service line with an (800) prefix instead of (888). You get a recording (like you would with most HMOs) and the folks on the other end are equally nasty, but in a different way ("Hey there, sexy guy … we love nasty talk as much as you do"). Audio here. I can’t believe people haven’t figured out, after all these years, that not all toll-free numbers start with (800).

From Annonny: "Re: interesting article." Link. Massachusetts brings up a new Web site that allows residents to compare hospital quality and cost information. Theoretically, anyway: navigation is not very intuitive and you have to spell the hospital’s name perfectly (and the front page graphic and tagline are painfully distorted). I screwed around with it for several minutes and never did figure out how to compare two hospitals unless their names can be found within a single search (like within one city). Nice idea and the information is good, but the site’s design is really bad for the intended audience.

From OHio: "Re: The Breakaway Group. They have decided, yet again, to redirect focus and abandon a product offering. Previously, they were change management leaders, then RIS/PACS implementation leaders, then Lawson’s learning partner, then EMR implementation leaders. Lawson Healthcare ERP was the #1 focus of the company, then the group was terminated and they no longer offer those services. Is anyone else sick and tired of these opportunists that are not from healthcare looking to capitalize in this sector?" All unverified. I’ve had a good report or two about the company from trustworthy sources, so I wouldn’t write them off just because they’re looking for a niche.

From eScriptionGuy: "Re: increases. Nuance Communications today announced that the staff will not receive merit increases this year; however, they will partially pay year-end bonuses (despite missing internal organic growth goals). The former eScription business achieved their financial targets, but won’t receive merit increases or year-end bonuses." Unverified, but even if it’s true, I’d still be pretty happy just to have a job in this economy. Probably not what you wanted to hear, but I’m a realist.

From Kent Winkdale: "Re: Doctations. A friend saw their product at an informatics conference. It’s a Flash-based EMR that takes advantage of Web services and sounds impressive. Does anyone have experience with them?" Kent isn’t a company shill trying to get sly PR (I know him), but I don’t know much about Doctations or anybody on its management team or board, although Louis Cornacchia (president and CEO) invited Inga to their MGMA booth in October in an HIStalk comment (he obviously was a company shill trying to get PR, but we’re OK with that as long as it’s an executive and not a PRtist).

From HIT National Attention: "Re: athenahealth. Seems the entire national media is going to athena’s CEO when it comes to HIT. Every time I turn around, they are in the news. I am curious to know what they know we don’t – they do mostly rev cycle, right?" Jonathan Bush is a very smart guy who is also press-friendly and able to clearly express a long and objective view in an eminently quotable way. Like most CEOs, his knowledge base extends beyond athenahealth’s core business of revenue cycle and PM/EMR. I’m guessing he can explain it as well as anyone, plus be entertaining in the process.

Listening: Crimson Sky, female-led melodic prog-metal from the UK that I found while trolling Rhapsody. So obscure they’re not even on Amazon or Wikipedia, but they sound pretty good. Also: Traening, fine, lush, dramatic, complex music by a long-gone band from Denmark (a more popular successor group is here). 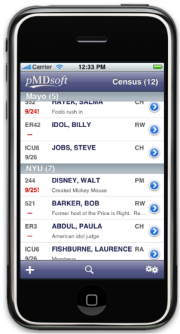 pMDsoft introduces its charge capture software for the iPhone, which it says is the first to market.

A source tipped us off to the new version of Microsoft CUI Patient Journey Demonstrator. It now uses SNOMED-CT and has new ECG and angiogram markup tools. The demo script is here (warning: PDF).

The Middle East arm of Indian tech company Wipro announces its HIS Lite information system for nursing homes and small hospitals, licensed as a monthly subscription.

Maricopa Integrated Health System (AZ) gets a local newspaper write-up for its $83 million EMR project. The article splashes on a little cold water near the end when it talks about the hospital’s almost-denied Joint Commission accreditation.

Leerink Swann and Nasdaq OMX hosted a healthcare IT forum earlier this week featuring Glen Tullman of Allscripts, Steve Klasko of USF, and others. You can view the Webcast after signing up here, they tell me.

Speaking of Webcasts, several people have asked about having HIStalk run one on their behalf (implicit in that, I would hope, is that I’ve got a short attention span and am therefore BS-averse, so they would have to be entertaining and useful to someone other than the company trying to sell a product or concept). Do you watch them? Is it worth my time to do those? (my presumptive answer is no, but I’m always open to counterpoints).

Amanda Adkins, a Cerner manager over its Healthe government business and 2004 campaign manager for Sen. Sam Brownback, looks to be the next chairwoman of the Kansas Republican party.

Peter Neupert of Microsoft Health Solutions Group is named to the board of the Foundation for the National Institutes of Health.

Red Hat invests in BI vendor Jaspersoft as part of a $12.5 million round of growth equity funding.

CSC releases (warning: PDF) a pretty gloomy report that summarizes the current and upcoming impact of our economic situation. The perfect storm is brewing, they say: Medicare/Medicaid cuts, declining margins, higher interest rates for capital improvement projects, more uncompensated care, and declines in elective procedures. In response, most hospitals have initiated such cost-cutting measures as delaying/deferring construction plans and IT projects. Forty-three percent anticipate needing to lay off staff. 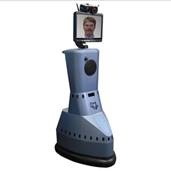 Take a look at this RP-7 robot by InTouch Health being piloted at military hospitals. It allows for two-way audio and video interaction between a doctor, patient, staff, or family. The units are about $250,000 and weigh about 200 lbs.

Not that I am necessarily eyelash-challenged, but a girl can never be too rich, too thin, or have too many eyelashes. Thus, good news here on a newly FDA-approved product to enhance eyelash prominence (I am happy to accept samples of LATISSE and provide my expert evaluation).

Here is a question for you HIPAA gurus. The FBI is looking over the medical records of pitcher Roger Clemens to determine if he committed perjury after denying he ever used human growth hormones or steroids. Did Clemens have to give his permission?

A JAMA study finds that people are more likely to lose weight if they have a financial incentive to do so. Well, duh!

The Health Research Institute at PricewaterhouseCoopers publishes its 2009 list of top health industries issues. The economic downtown tops the list, technology ranks #6, and IDC-10 is #9.

IT support and service provider ITelagen is a new reseller for the Allscripts MyWay platform. That’s the old Misys MyWay for anyone not keeping up.

In San Antonio, the Army and Air Force come together to break ground on a $724 million construction and renovation project at Brooke Army Medical Center and Wilford Hall Medical Center. The unified facilities will be named the San Antonio Military Medical Centers North and South.

In another sign that the economy isn’t all bad, Ryan Cos. announces the start of a new $25 million medical office project in Auburn Hills, MI. 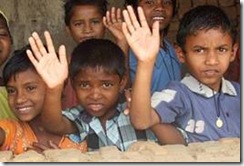 This last weekend, I got my Christmas tree up and the lights on, so I am settling into the holiday spirit. A friend sent me a cool Christmas CD called “A Miracle Foundation Christmas” which will get even Mr. Grinch in the mood. One hundred percent of the proceeds for this $15 CD go to support the Miracle Foundation, an organization that runs several orphanages in India and provides children with such basics as food, clothing, water, shelter, medical care, and education. So, great CD, great cause, and includes Bob Schneider singing the sexiest version of “Silver Bells” ever.

A study by actuarial company Milliman, Inc. finds that low Medicare/Medicaid reimbursements to hospitals and physicians costs consumers and employers almost $90 billion. The report claims that annual health care spending for a family of four is $1,788 higher than it would be if the government paid rates similar to private carriers. The underpayment from public programs effectively shifts the uncovered costs over to employers and consumers. Not surprisingly, several big insurance companies paid for the study.

The NY State Health Department releases $47 million to Kingston Hospital to facilitate its combining with Benedictine Hospital. The money will be used to expand the ER, to fund the new Foxhall Ambulatory Surgery Center, and to pay hospital debt.

Washington, DC is also handing out money. The city extends $51 million in medical grants for three healthcare entities to improve primary and emergency care for children and the poor.

It’s apparently not a great time for a career in healthcare if you live in Minneapolis/St. Paul. In addition to the 300 jobs eliminated by Allina Hospitals and Clinics a couple of months ago, Fairview Health Services, Park Nicollet Health Services, and North Memorial Health Care are terminating 200, 600, and 233 employees, respectively. Good luck, all.

This survey claims that 27% of American adults say they are "extremely likely or somewhat likely" to create an online personal health record to help track their medical history and medications.

Only one in five hospitals collecting data on patient injuries or deaths from medical errors shares that information with managers or others who could implement measures to address the problems. This based on an AHRQ survey of 1,600 hospital risk managers. Which begs the question: why not share that information? Wouldn’t it help everyone to get better?

An AHRQ report suggests that doctors using e-Rx were more likely to write prescriptions for lower cost drugs that lead to savings. If e-RX were used by all doctors, researchers claim the savings potential could be $3.9 million per 100,000 patients per year.