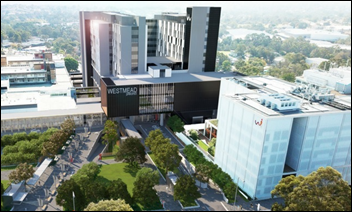 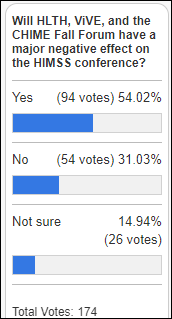 A significant percentage of poll respondents think that other conferences will negatively impact that of HIMSS. Dr. Showoff opines that HIMSS is “outdated, entitled, and bloated;” created lingering resentment over its decisions around the 2020 cancellation; and erred in limiting its conference venues to Las Vegas and Orlando. Jack says that while the association conference model of HIMSS and other member organizations is dying quickly, “CHIME latched onto HLTH for cash flow” and questions whether provider executives really paid to show up at HLTH since the conference won’t share its attendee lists. Meanwhile, the Thanksgiving leftovers are about to be abandoned as RSNA kicks off in McCormick Place.

New poll to your right or here: Which winter holiday is most important to you? Regardless of your choice, I think we can agree that it’s coming soon.

You’ll probably see some bugs on the site over the next couple of weeks as I migrate to a new server, which always involves challenges with timing, PHP version incompatibilities, and problems I didn’t catch during testing. I dread this kind of project because it’s just me trying to get it done without making a technical mess.

Journalism peeve: writers who state that some major story fact is “unclear,” meaning the writer is interjecting their own unanswered questions instead of sticking to known facts. Also, statements such as “the community is in mourning tonight” that attempt to portray emotional color as a universal feeling without quantification or exception. I suppose that these are minor sins compared to crafting entire “news” articles whose only sources are TikTok videos or anonymous Reddit comments.

HIStalk reader Mark made a generous donation to my Donors Choose project, which with matching funds applied fully funded these teacher grant requests:

Microsoft warns that hackers are exploiting vulnerabilities in the Boa web server for embedded applications, which was retired 17 years ago but is still being used in routers, security cameras, and software development kits.

In India, systems of 2,200-bed AIIMS go offline from a ransomware attack.

The computer network of One Brooklyn Health System remains down following a November 19 incident.

News outlets in Canada warn that several of Ontario’s virtual care sites will shut down after reduced payments take effect on December 1. Most surveyed doctors say won’t accept the new $20 fee of Ontario Health Insurance Plan that affects patients who have not been previously seen in person. Some sites have already starting turning OHIP patients away or requiring them to pay cash. One hospital HIV and hepatitis C clinic that rarely sees patients in person says it will be paid $15 per appointment, less than 25% of what it billed using previous fee codes in the absence of virtual-only ones.

Police in Bhilwara,India shut down the Internet for two days as family members of a man who was shot by “four miscreants” vandalize the hospital in which he died, demanding government jobs and cash payments as compensation.

A patient who woke up during his 2017 back surgery at UCSD says in a lawsuit that a former anesthesiologist stole some of the fentanyl intended for his case, falsified his medical record to indicate that he was given the full dose, and was later found unconscious with drugs and syringes in a hospital bathroom. The anesthesiologist, whose medical license has since been revoked, admitted that he injected himself with unused patient drugs in hospital bathrooms up to eight times per day starting with his UCSD residency in 2003. 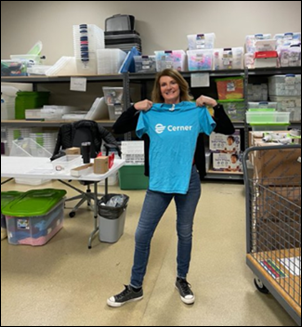