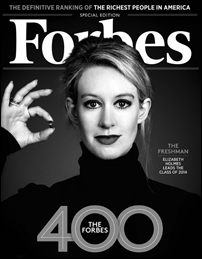 Theranos had raised nearly $1 billion from investors in valuing the company at $9 billion.

Sunny Balwani, former COO and a romantic partner of Holmes, is scheduled for sentencing on December 7 on 10 counts of wire fraud and two counts of conspiracy to commit wire fraud.

From Les Diables Bleus: “Re: HLTH. I had a full three days of what I felt to be high-value networking — not sales, mind you, which don’t happen at conferences. It’s a good show to see what’s trending (remote point solutions and health equity) and to meet potential partners. Running into a provider was like a unicorn sighting, which is ironic since that is the HLTH mascot. It is like an all-inclusive resort in that food, drinks, and entertainment were easy to find and included. My exhibitor friends said it was easy to have a booth since HLTH manufactures it with your logo and minimal customization, puts it up, and tears it down so you don’t have to deal with shipping, Freeman, or late-night installations. I would definitely attend again purely for the networking.”

From Kitschy Kicks: “Re: HLTH. How appropriate that it was in Las Vegas, where the house always smites players who think their smarts will make them winners.” It’s a pretty good analogy that brash startups were probably emboldened by the heady atmosphere of both the conference and the Strip into thinking that they can beat the house. Companies that don’t provably solve a problem that prospects will pay for in a financially strained environment, that aren’t making money, and that took too much investor cash and have little to show for it probably don’t need to plan much for HLTH 2023.

From Been There: “Re: HLTH. Our company refuses to pay to play for sessions or articles. The challenge is when customers expect us there to support them, and when VC groups are uneducated but still influential (like former CMS execs). It’s worth a 24-hour trip to keep folks honest.” Plus your attendance entitled you to be a guest on an endless number of podcasts and video interviews that nobody will ever consume. And to hear the inspirational story, for his speaking fee of more than $100,000, of how Lance Armstrong overcame adversity (choosing to be the dirtiest doper, cheater, and bullying liar in the history of sports) to start a new and possibly related career in health and wellness investing. 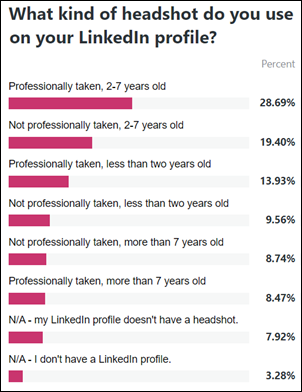 Most poll respondents have a LinkedIn profile and 92% of them contain a headshot, more than half of which were taken professionally. Nearly 20% of the headshots are more than seven years old, so couple that with professional retouching and there’s a pretty good chance that you might need to squint to see the resemblance in person.

New poll to your right or here: Will HLTH, ViVE, and the CHIME Fall Forum have a major negative effect on the HIMSS conference? I differentiate my readership from that of other sites by the number of decision-makers who read HIStalk, an advantage that HIMSS has traditionally enjoyed in attracting exhibitors. New conferences may be poaching that desirable audience from HIMSS. The biggest threat to HIMSS is no longer the obvious one, that in-person conferences will be replaced by virtual ones (which were pretty much a complete bust during the pandemic’s darkest days), but rather that the newer conferences offer an alternative that is drawing a response.

I mentioned recently an announcement of two companies that consummated what was labeled as a “merger” even though it was obviously an outright acquisition that wasn’t called that to avoid offending the delicate sensibilities of the acquiree. Legally speaking, a merger occurs when two companies join together to form a new company, and if there’s no new company, then it is an acquisition (there’s very little “M” in “M&A.”) Even “AP Stylebook” warns reporters that true mergers of equals are nearly unknown and should be called that cautiously – PR BS aside, if it will be the same company name, CEO, and headquarters location, they bought the other company.

Mrs. H saw my mention of the Meta Quest 2 virtual reality system and got me one as a special occasion gift. It is crazy immersive and lots of fun even with the limited number of apps I have so far — mini-golf, Beat Saber, and table tennis (those last two are sweat-inducing exercise). I don’t like giving money to Facebook and they could kill off the product line as they run the company into the ground chasing a Metaverse pipe dream, but it’s fun in the mean time. I nearly face-planted when I leaned in for a table tennis shot and tried to catch myself on the realistic yet imaginary table.

I’m looking at the short list of conditions that just-launched Amazon Clinic will treat via text messaging, which includes problems such as dandruff, motion sickness, and birth control. I’m questioning how much value the messaging adds clinically over just making the drugs that are used to treat these conditions non-prescription. You could easily train a pharmacy technician to read the questionnaire results from kiosk or online entry, then hand over the meds if indicated with any appropriate instructions or warnings, which is about all online doctors would do. “Prescribing what patients ask for” is a common business model that adds little value. The new Amazon Clinic is really just Amazon advertising the services of other companies, as it does with its fraud playground of China-based sellers of electronic devices or clothing items whose disposable company names look like a cat wandered across a keyboard.

Business Insider reports that Amazon’s Alexa business division lost $3 billion in the company’s most recent quarter, ranks third in usage behind Google Assistant and Apple Siri, and is being hit hard with layoffs.

Sanford Health and Fairview Health Services announce plans to merge into a 58-hospital system under the Sanford Health name and CEO. 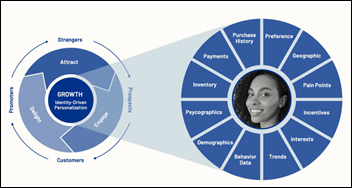 A report by Providence’s Digital Innovation Group says that health systems should take a retail-like “digital flywheel” approach in using technology to keep in touch with people who otherwise have only infrequent encounters. The authors say the EHR is a big barrier for outreach – it requires clinician involvement, it doesn’t support all lines of business, and it doesn’t address all types of consumer interaction. They recommend an Amazon-type system that applies algorithmic personalization to data to create a digital consumer identity. They say that unlike Amazon, health systems already offer a wide variety of services and have connections to partners that they can recommend to consumers. The report says that such efforts can be profitable to health systems given the $1.2 million lifetime value of a patient and that simply being able to assign a PCP is valued at $3,000. I’m a bit skeptical since Providence and other health systems have profited nicely from selling interventional care and well-intentioned attempts to offer wellness services nearly always fail for several reasons (lack of consumer motivation, ever-changing health plans, and a lack of clinically documented effectiveness). And perhaps the biggest challenge – whether consumers really want an ongoing relationship with their local health system as they might with Amazon or Starbucks. Personally as a “no news is good news” sort, I’m thrilled not to hear from my local medical center.

Texas Attorney General Ken Paxton sends a Civil Investigative Demand letter to Epic demanding that the company explain its policies on children’s health information. He says he is following up on complaints from parents that they lost access to the records of their children who were treated at Memorial Hermann Health System once the child reached 13 years of age. The health system, which is also targeted by Paxton’s investigation, says it is not aware of any parent complaints. Paxton said in a comment about his Epic inquiries, “Too many companies are taking marching orders from the radical left, especially when it comes to their all-out assault on family values and parental rights.”

First responders in Ontario go back to paper when its IMedic software is taken offline by a cyberattack.

A JAMA Network opinion piece says that patient satisfaction surveys aren’t suitable for evaluating physician performance. The authors reference an interesting previous study in which the patients who rated doctors highest had higher costs and mortality rates. They observe that most patient survey instruments are old and weren’t designed to reward high scorers. They also note that physician panel size and workload means that one disgruntled patient can drag down a clinician’s score unfairly (see: sour Yelp whiners). They urge public and private payers to stop using patient satisfaction scores for quality assessment and payment.

A randomized clinical trial finds that patient portal messages reminding parents that their child is due for a well child visit and COVID-19 vaccinations increased the rates of scheduling both.

HIStalk sponsors exhibiting at RSNA November 27-30 in Chicago include: