From Door Shower: “Re: HIMSS. Recently laid off several dozen folks. As usual when that happens, many others are leaving voluntarily.” Unverified, although I’ve heard this from former employees.

From Awardee: “Re: MedTech Breakthrough awards. Who runs this?” Parent company Tech Breakthrough, which runs dozens of cloned awards sites, apparently would rather you didn’t know who’s in charge since they provide no contact information or employee names and hide their domain registration information. They are equally protective of their awards criteria and how much companies pay the marketing company to tout their “wins” in press releases. I’ll speculate from experience given the company’s lack of forthrightness – it’s a handful of India-based tech people who are banking rupees for giving companies awards whose validity is questionable but rarely actually questioned. I’m happy to update with specifics should the company be interested in providing them.

From Punjab Pete: “Re: Ascension. Lost $884 million in Q1. CIO Gerry Lewis is out, HCL outsourcing contract is axed.” The loss is verified, the other items are not, although being discussed on layoff sites. 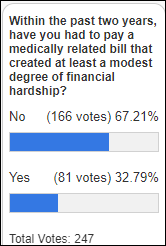 One-third of poll respondents have recently struggled to pay a medical bill. Northerner slyly expresses bafflement about the question because they live in Canada.

New poll to your right or here: What action should be taken when a clinician’s mistake kills a patient?

An OIG joint audit of efforts by the DoD and the VA to make their Cerner systems interoperable notes that migration of legacy data into Cerner could have been more consistent, that medical device integration could be improved, and that user access should be limited to information needed to perform job duties.

The VA confirms that Cerner was unavailable 50 times for at least some users singe going live in its Pacific Northwest sites, but the outages were not widespread. The VA’s Oregon and Idaho sites will go live next in June.