HIMSS21 looked quite a bit different than usual – far fewer exhibitors and attendees, big expanses of open space in the exhibit hall that featured widened hallways and the unused booth space of cancelled exhibitors, lack of blockbuster announcements and newly issued federal rules, and fewer C-level level provider and vendor executives who stayed home and let their underlings attend. I’m going to take the contrarian point of view and say that I might have enjoyed it more than usual, for these reasons:

I always gripe that the HIMSS conference has grown to be too big, too unfocused, and too much of a celebratory blowout that earns its high attendance only because of FOMO and vendor worries about being one-upped by competitors. For me, HIMSS21 was more to my liking. We’ll see how HIMSS22 lays out, although Florida’s world-leading COVID-19 case count and hospitalizations is raising questions about whether a spring conference is likely to happen. At least HIMSS won’t have to worry about rolled-over registrations from HIMSS21.

I felt perfectly COVID safe in the conference areas, but I worry about what attendees might be bringing home other than booth swag when I saw the hotel bars and restaurants packed 10-deep with unmasked people, mostly attendees, talking closely and loudly. We all know that bars are among the highest areas of COVID spread and some of those venues didn’t appear to be closed to the public. I steered clear and hope those attendees don’t work around patients or at least plan to isolate.

I had forgotten since HIMSS19 just how much young sales guys curse when conversing with each other in private conversations near others.

The cost of Palazzo room service coffee – $20 plus 18% plus $9 (around $33). The line at the hotel’s Starbucks at 6 a.m. – about 50 people, most likely Easterners who crashed early Monday night after gaining three hours and then woke up early seeking a caffeine jumpstart.

I almost welcomed once again seeing the conference phenomenon of people walking slowly down the middle of busy conference hallways while screwing around with their phones, unaware of how many rear-end crashes they are narrowly avoiding.

Is it overly ironic when people at an in-person conference demand that virtual medical visits be paid for because they are efficient and convenient, but watching educational sessions virtually instead of spending patient money to congregate in Las Vegas apparently is not acceptable? Especially when every part of the hall is already jammed with amateur and professional videographers, talking heads, and podcasters who are recording content that few will ever bother to consume?

I cringe every time someone call this city “Vegas.” Three syllables isn’t all that many. 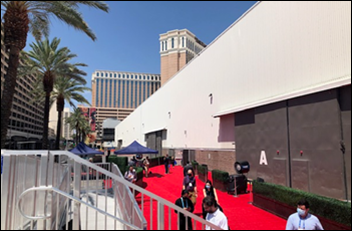 One of few areas in which HIMSS planned poorly was having educational and exhibit sessions in the Caesars Forum (note: the missing apostrophe is correct), which is easily accessed through a 50-yard outdoor walkway bridge from the end of Aisle 22 of the exhibit hall (it is not anywhere near Caesars Palace, either). The problem is that HIMSS scheduled early morning sessions in that building, and that bridge was therefore not accessible until the exhibit hall opened at 9:30 a.m., leaving the shuttle bus or walking as the only alternatives. Otherwise, that brand new facility was super nice, and I enjoyed visiting the exhibit hall and specialty pavilions there even though I entered it every time temporarily blinded by the hot, bright sun. 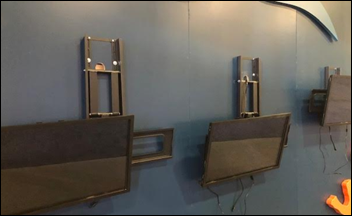 Some exhibitors were understandably not quite ready when the hall opened at 9:30, as employee were still unpacking boxes and bringing monitors to life. 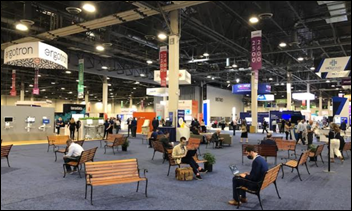 Seating was plentiful throughout the exhibit hall thanks to reduce vendor count, some from last-minute decisions. I like that those vendors, or perhaps HIMSS itself, paid Freeman a fortune to have their areas populated with benches or tables and chairs. 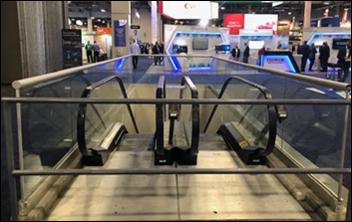 The much-reviled Hall G exhibit area downstairs, which was like a poorly planned basement rumpus room, has been closed, thankfully, although not before I paid $5,000 several years ago to have a tiny, seldom-visited booth down there. Exhibitors revolted one year against low traffic, forcing HIMSS to install new signage, announce overhead its pleas for people to go down there, and comped lunch for those folks who took in the subterranean spectacle. The area is blocked off from the main hall now and the only HIMSS attendee access was via the downstairs entrance, where you could see its only tenant, the COVID-19 testing center. 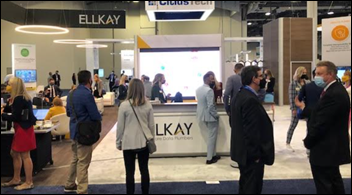 The big exhibit hall booth winner was Ellkay, for these reasons: (a) its booth was across the aisle from Epic’s; (b) it drew people like crazy from the moment the hall opened until it closed, outdrawing even its neighbor Epic; and (c) it was a big space that was well designed and staffed by helpful employees. Someone from the company told me Ellkay has grown from 60 employees to 650 over a short period. Their booth was packed every time I walked by, from hall opening at 9:30 on. 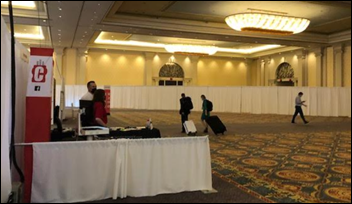 Some vendors suffered from poor location. I hope HIMSS offered a big discount for this space. 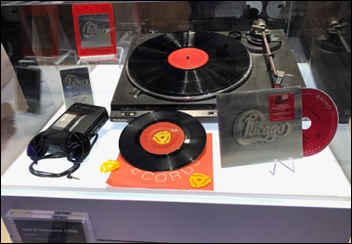 Canon Medical had a mini-museum of disruptive technology, including this display related to music. The rep told me that Canon invented autofocus. 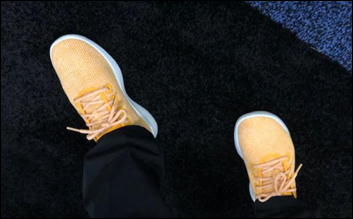 The Zipnosis folks were sporting cool orange shoes, which they said were Allbirds.

I got a quick look at the patient engagement platform of Twistle by Health Catalyst, which had some nice folks working their booth.

I was surprised at the customer logo gallery of virtual care platform vendor EVisit, which includes Texas Health Resources, Trinity Health, and Banner Health. It declares that unlike telehealth technology competitors, “it does not and never will include a competing provider network.”

Bravada Health’s Ayva offers an interesting surgical journey system that offers videos, checklists, and reminders to give patients the best outcome, all without installing an app. 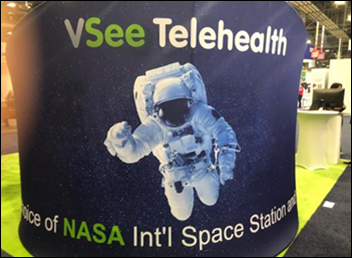 And the winner of Best Customer Name-Dropping is … 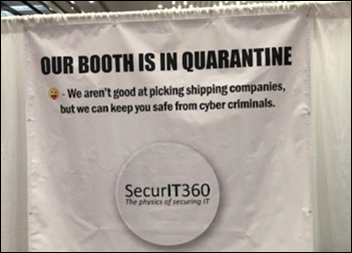 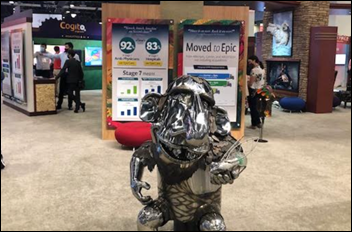 Epic’s booth was predictably decorated with big, weird pieces, but I didn’t see Judy or Carl there, probably because UGM is coming up shortly. 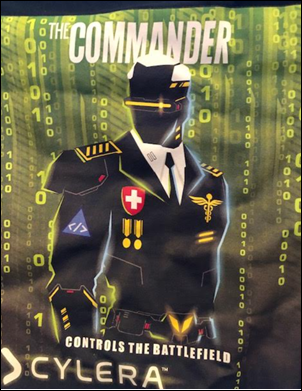 Cylera was printing custom tee shirts, of which Lorre got me this one.

Adobe announces Adobe Experience Cloud for Healthcare. It’s hard to tell what it does from the company’s excessively lofty description, but it sounds like online marketing, audience insights, and digital enrollment. 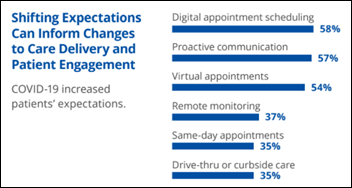 A SymphonyRM consumer survey finds that physicians dropped off their communications with patients during the pandemic and that infrequent communication was the top reason patients lost confidence in their doctor during that time. About 20% of respondents say they will look for a new doctor because of how they handled COVID-19. Fewer than half received COVID-19 information from their doctors and only one-third received communication about the vaccine. 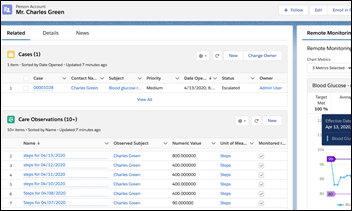 Salesforce announces new Health Cloud features that include remote patient exception monitoring, intelligent appointment management, and medication management. I wasn’t sure if they really pulled out of HIMSS21, but swinging by their listed booth to check out the new features yielded only a large expanse of bare carpet.

Zoom launches a beta release of a no-app mobile browser version of Zoom for Healthcare, available only for patients who use IOS.

I’m looking for interesting stuff to see Wednesday now that I’ve done a superficial surf of the HIMSS21 landscape, so send suggestions my way. Lorre will be in the hall Wednesday and Thursday if any current or prospective sponsors want to chat. She doesn’t really have anything to do since we aren’t exhibiting or doing HIStalkapalooza, thank goodness.