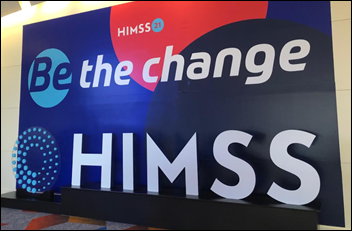 My trip to Las Vegas was thankfully uneventful, with all plane passengers I saw masked up. Uber pricing was crazy at the Las Vegas airport, showing $45 to get to the Palazzo versus Lyft’s $21. I ended up taking a cab since the rate is fixed at $27, there was no waiting, and I could see the vehicle right in front of me before choosing. I pulled up Uber for other destinations from the hotel and it was always double Lyft’s rate, which reminded me why I always use Lyft in Las Vegas. It’s hot outside, but who goes outside  during a conference that is held in the desert at connected venues?

Pondering: why does HIMSS spend money to buy airport signs? Do Las Vegas visitors really register for the conference on a whim, or do registrants require reassurance that they are in the right city?

Masking within the Venetian area is maybe 75% at best, with lots of pulled-down masks and some folks who walked right by the “masking required” signs with no mask in evidence. Compliance was close to 100% in the HIMSS areas, which offers little comfort since you can’t avoid the casinos, hotel hallways, and restaurants full of the unmasked. Overall, I would say I have felt safe since leaving home, but I frequently wanted to commit mayhem on someone who clearly doesn’t care about being responsible around others or who defiantly ignores clearly posted policy. 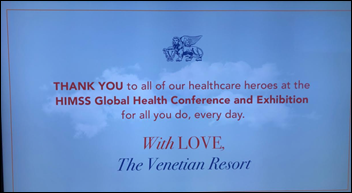 HIMSS21 check-in was painless, although signage wasn’t perfect (maybe because of the hotel and convention center not being purely dedicated to the conference) and some of the “ask me” information people didn’t seem to be fully informed when I posed questions. I can’t quite figure out how to get to the Caesar’s building for educational sessions, although it seems to involve passing through the exhibit hall that was closed today to get to a bridge that was also closed today. I’m not sure why prior HIMSS conferences in Las Vegas were all contained within the Sands-Venetian complex and now the much-smaller HIMSS21 requires walks or shuttles to the Wynn and Caesar’s Forum Conference Center (not to be confused with the Caesar’s hotel since they are not adjacent), but that has dampened my already-minimal enthusiasm for attending educational sessions. I’ll probably just stick to the exhibit hall and surrounding areas this week.

No badge holders were provided this time, just a clip-on lanyard that fits onto the paper badge. I’m not too sure about the integrity of these. Names are also not printed in large font, so it will be hard to recognize masked folks. It was weird walking the HIMSS21 hallways and not being able to recognize people since you can’t see their faces. I predict that chance encounters will be greatly reduced. 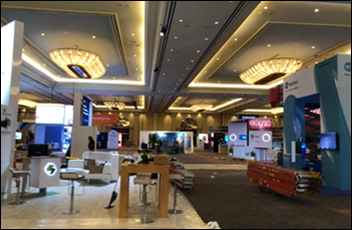 I snuck into the exhibit hall when a security guard’s attention was diverted. It has the widest aisles and booth spacing that I have ever seen. The exhibitor count has dropped another 20 or so since Friday to 709. Setup was still in progress, so it’s hard to say whether the layout will be thankfully spacious or embarrassingly sparse. Unlike previous conferences, it was quiet instead of risking being run over by heavy equipment that was loading in booth components in a superhighway-like layout.

That was it for my HIMSS21 experience today since the opening keynote and reception didn’t interest me. My room at the Palazzo is excellent and a good deal at $229 and I had great and well-priced happy hour beer (the locally brewed Bonanza, which was outstanding) and oysters on the half shell at its Sugarcane restaurant. I’ll probably spend all of tomorrow in the exhibit hall, leaving my day fully planned except to come up with a dinner idea that hopefully doesn’t involve the mostly overpriced hotel restaurants that are like a food court for rubes who think celebrity chefs are actually in the kitchen cooking. I confess that my favorite Las Vegas restaurants from past conferences are Home Plate, Italian American Club, and the Village Pub at Ellis Island, so my preference is inexpensive, off the beaten track, and devoid of other HIMSS conference badge-wearers. It may be also that exhibitors provide enough snacks to tide me over anyway.

From Excitable: “Re: HIMSS21. You seem jaded by the conference.” I think everyone who has attended more than a handful of HIMSS conferences would say that they aren’t all that enthused at the prospect of returning or assured of the ROI for showing up. Most of the bubbly folks who tweet out their barely-contained excitement about attending are lower-level employees who don’t have a lot of experience, and for them, I understand, but don’t share, the newbie thrill of travel expense reimbursement, mugging with others for group selfies, and vendor parties. The last thing I want to do at HIMSS is to sacrifice an entire evening just to get free vendor food and drinks or to huddle protectively with other rookies.