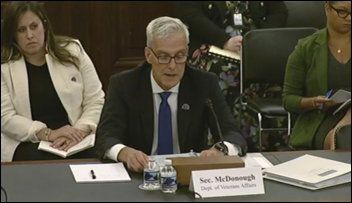 VA Secretary Denis McDonough tells the Senate Veterans’ Affairs Committee that he is putting the VA’s Cerner implementation on hold. This follows completion of a three-month project review that found serious “governance and management challenges.”

McDonough says that the VA’s first implementation at Mann-Grandstaff VA Medical Center (WA) in October 2020 did not live up to its promise of “seamless excellence in VA care,” adding that the report found “numerous patient safety concerns and system errors” as well as significant negative impact on productivity.

McDonough said he commissioned the review after hearing firsthand about duplicated prescriptions at Mann-Grandstaff and a user’s complaint that a Cerner help desk employee was unable to answer a user’s questions because he had just one week’s experience. He added that clinicians tell him that most of the integration between the respective Cerner systems of the VA and DoD happens inside their heads, not on their computers.

McDonough vowed to improve training and testing, to increase its oversight of Cerner, and to make leadership changes to get the project back on track. He also says the original plan to roll out Cerner by geographic area was a mistake and scheduling of go-lives will now be based on evidence of readiness.

The cost of the project, which was originally estimated at $10 billion when Cerner was awarded a no-bid contract in 2017, has risen to over $20 billion. McDonough has ordered a new budget estimate for the entire project, which will include the several billion dollars of infrastructure upgrades that the original estimate missed.

Committee chair Senator Jon Tester (D-MT) told the group, “I’ve had the impression for some time there are folks out there milking the cow. Every day they go out and they see this cash cow, and they’re getting every dime they can get out of it. There’s been damn little accountability. I hope Cerner’s watching this. Cerner’s not up to making a user-friendly electronic medical record, and in fact what’s transpired here is we’re going in the opposite direction, then they ought to admit it and give us the money back so we can start over.” 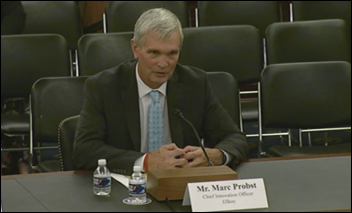 Also offering testimony to the committee was Ellkay Chief Innovation Officer Marc Probst, MBA, who described the rollout of Cerner at Intermountain Healthcare when he was CIO and the keys to a successful EHR implementation. He responded to a question about what Congress should expect by urging clear goals, reductions in support tickets and complaints over time, and performance against real milestones. Asked if anything stood out for immediate action, Probst recommendation resetting expectations against original and current requirements and reviewing detailed project work plan milestones. 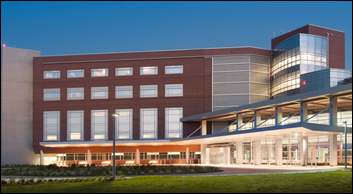 From Rashaverak: “Re: Woman’s Hospital, Baton Rouge. This is the first I’ve heard that the sheer cost of an EHR implementation is driving a hospital’s business strategy, essentially forcing it into an affiliation or merger because it can’t afford its EHR of choice. It must be a record for Epic if the hospital’s stated cost is indeed $200 million over seven years – has Epic no shame for pricing the system at 10% of the 168-bed hospital’s total expense? That kind of pricing will keep Meditech and Allscripts around and makes the $1.2 billion that Partners spent over 10 years look like a bargain. Isn’t the goal of IT to bend the cost downward instead of upward?” 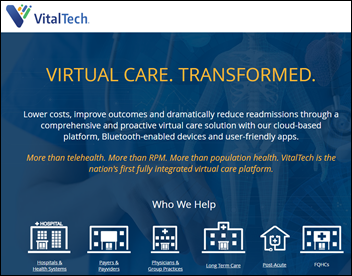 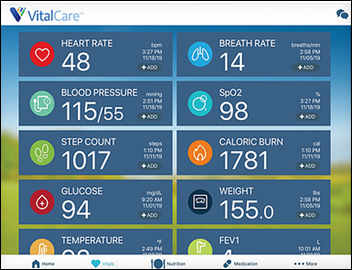 VitalTech sent over a link to this intro video and client testimonial. Holy Name Medical Center CEO Michael Maron movingly describes how contracting COVID-19 and then infecting his own family was a “burden I’ll have to bear for the rest of my life,” but he says that being monitored by VitalTech’s system at least allowed them to recover at home.

Listening: old Genesis, which I didn’t follow until pandemic times. “Firth of Fifth” and “Supper’s Ready” are as good as music gets to my ear, and while I can’t abide the treacly 1980s hits of Phil Collins, he spent the late 1970s effortlessly backing and then leading a band of individual musical geniuses by drumming the most complex time signatures imaginable. Genesis wrote and played their best music, which I predict will be as timeless as Beethoven, in their late teens and early 20s.

I’m jealous of people starting new jobs who post photos on LinkedIn of the cool company swag that was waiting at their desk on their first office day. I don’t think I ever got anything when I took a new health system job.

It’s about time to post my HIMSS21 guide describing what HIStalk sponsors will be doing there, so submit your information this week. I’ve received submissions from 19 companies, including two who aren’t actually sponsors and thus will be regretfully unrepresented. 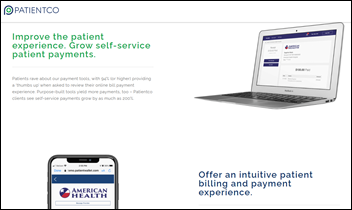 Bloomberg reports that the private equity owner of healthcare payments analytics vendor Cotiviti is considering an IPO that would value the company at $15 billion. 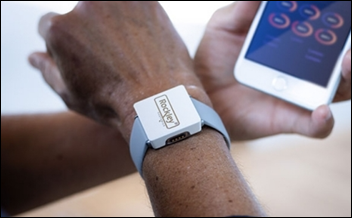 Non-invasive digital sensor developer Rockley Photonics announces plans for trials of “clinic on the wrist,” a combination of hardware, firmware, and cloud analytics that measures biomarkers such as body temperature, blood pressure, hydration levels, and measures of blood alcohol, lactate and glucose. The company hopes to complete testing and release the product for commercial use next year. The company is about to go public via a SPAC merger. 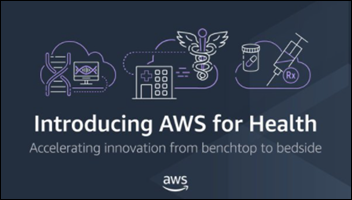 Amazon announces AWS for Health, a set of services and partner solutions for healthcare, genomics, and biopharma. 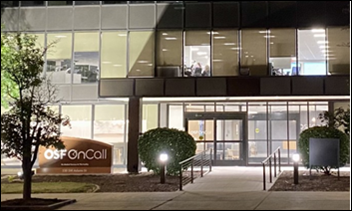 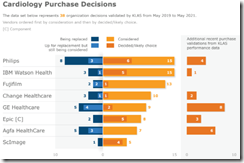 A KLAS report on cardiology systems says that no individual offering stands out, as organizations have pieced together multiple systems but are re-evaluating as part of their enterprising imaging strategy. Most often considered are Philips, IBM Watson Health, and Fujifilm, while Epic is often chosen as part of its product suite even though it lacks a cardiology archive and offers weak structured reporting.

ONC hopes to have the Trusted Exchange Framework and Common Agreement (TEFCA) network open for participation in the first quarter of 2022. 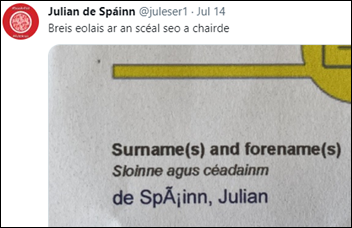 In Ireland, people complain that their names are misspelled on their government-issued COVID-19 digital travel certificates and worry that the mismatch will prevent them from boarding flights, which the government says is due to hospital, doctor, and pharmacy systems that can’t handle language-specific punctuation and characters such as the fada.