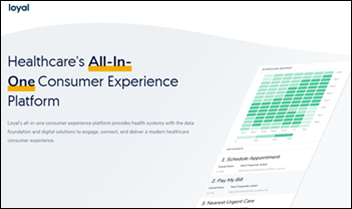 Welcome to new HIStalk Platinum Sponsor Loyal. The Atlanta-based healthcare consumer experience company is solely dedicated to the betterment of patient care and is the preferred software solution for improved care utilization among the nation’s leading health systems and hospitals. One of the first companies to offer end-to-end digital and AI-powered solutions spanning the entirety of the patient journey, Loyal makes it easier for patients to access and schedule care they need. Solutions include Connect (intelligent data management), Patient Connect (provider search and scheduling), Guide (chatbot and live chat), and Empower (reviews, star ratings, and comments). Customers include OHSU, Orlando Health, and Piedmont Healthcare. Thanks to Loyal for supporting HIStalk.

My reaction to Microsoft’s planned acquisition of Nuance for nearly $20 billion:

April 21 (Wednesday) 1 ET. “Is Gig Work For You?” Sponsor: HIStalk. Presenter: Frank L. Poggio, retired health IT executive and active job search workshop presenter.  This workshop will cover both the advantages and disadvantages of being a gig worker. Attendees will learn how to how to decide if gig work is a good personal fit, find the right company, and protect themselves from unethical ones.

Cohere Health raises $36 million in a Series B round, bringing its total funding to $46 million. The startup has developed care coordination and preauthorization software to improve communication and collaboration between providers, payers, and patients.

Twenty-three hospitals in northeastern Ontario will implement Meditech Expanse as part of a new record-keeping alliance.

GetWellNetwork announces GA of GetWell Anywhere, which gives patients the ability to access engagement and educational resources from their mobile devices throughout various care stages and settings.

Federal News Network digs into the problems VA clinicians have been dealing with during the transition to Cerner Millennium – a process that, despite initial reports of success, has prompted congressional leaders to call for a review before further rollouts are initiated. Users have noted an excessive number of clicks for certain tasks, data migration failures, dropped community care referrals, and needing to use Microsoft Teams to communicate with other users about EHR problems. The House Veterans Affairs Technology Modernization Subcommittee will meet later this week to review the $16 billion, 10-year project.

A study finds that people who are hospitalized with the B117 coronavirus variant experience outcomes that are no worse than patients infected with other variants, while another study concludes that vaccines seem to be effective against B117.

Salesforce will allow only fully vaccinated employees to return to work in its San Francisco tower, raising questions about vaccine accessibility and the legality of mandating use of a product that has not earned full FDA approval.

China’s disease control director says the country’s self-developed vaccines offer low COVID-19 protection, leading it consider using MRNA vaccines such as those produced by Pfizer and Moderna. The official, who had previously questioned the safety of MRNA vaccines, walked back his comments afterward, saying that he was referring to all vaccines and not those specifically rolled out by China that use a more primitive vaccine platform. Another official says that China is developing its own MRNA-based vaccines.

Google will conduct a user feedback study as it prepares to develop a consumer-facing health record tool similar to Apple’s Health Record app. Three hundred patients are being recruited for the study from Epic customers in Atlanta, Chicago, and Northern California. The search engine company’s last foray into personal health records, Google Health, lasted just three years, shutting down at the end of 2011. As I opined then, “The only model Google knows involves near-universal adoption that gets advertisers salivating, not having a tiny contingent of wellness buffs and savvy chronic disease sufferers using their free online service. Ultimately, Google’s problem is that an awful lot of Americans care about reality TV and celebrity gossip more than their health. They’re more interested in patch-me-up-doc ‘healthcare’ than I-need-to-make-better-choices ‘health’ that requires proactive electronic tools. The most shocking aspect of Google Health’s announcement in 2008 was either that Google hadn’t figured that out or that they thought they could succeed anyway.”

University of Wisconsin – Madison researchers find that use of the e-prescribing transaction type CancelRx increased the percentage of successfully discontinued outpatient prescriptions at UW Health. CancelRx, which was developed by the National Council for Prescription Drug Programs, sends pharmacies an electronic notice via Surescripts to not fill a previously sent prescription, which is then acknowledged by the pharmacy. It prevents meds from being filled or refilled in the case of an allergic reaction, a prescriber error, or a change in patient status. The authors note that few providers use CancelRx. I’ve seen previous implementation reports and a common problem is that since pharmacies are rarely set up to accept CancelRx transactions, provider EHRs require modification to turn the transaction into a fax.