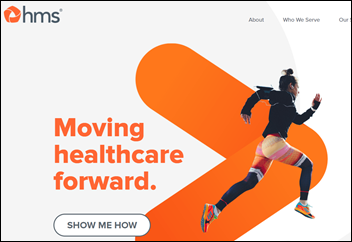 Gainwell is backed by private investment firm Veritas Capital, which says it will optimize HMS’s solutions with those of Cotiviti, another of its investments.

From Writer Blocked: “Re: Readers Write articles. Why do you allow only a single author?” This question has come up several times in the past couple of weeks, oddly. Answer: those are supposed to be personal opinion pieces of about 800 words, so they should not require enlisting a helper. On that topic, I really wish vendor authors would write their own imperfect but honest and insightful articles instead of outsourcing the job to PR companies whose only attainable goal (since they are not health IT experts) is marketing disguised as shallowly presented thought leadership. That’s a failing of the vendor, not their PR firm. I also draw a firm line on interviews — I only interview CEOs, I don’t provide a list of questions in advance since it’s a dynamic conversation, nobody else can be on the call because I’m not interested in what the handlers say and I know they’ll say it anyway, and I don’t provide a draft before the interview runs because the marketing people will form a committee to edit the life out of it. My co-existence with marketing and PR people is comfortable since most of the experienced ones know how I work, respect the process, and add value in making the connection and letting me do what I’ve been doing for nearly 18 years. Other sites provide examples of what happens when you cozy up with advertisers and send readers fleeing for the exit.

From No-Fly Zone: “Re: travel. A friend’s daughter has received a job offer from a children’s hospital that is requiring an on-site interview, which is a 1,500-mile flight, to complete the I-9 employment eligibility verification process. The HR department recommends making the trip immediately and won’t allow using a remote I-9 service. Who is flying for work these days, how is it in the middle seat, and what precautions are people taking?” Readers are welcome to weigh in. ICE has relaxed the Form I-9 document examination requirements through December 31 under some situations, but it’s up to the employer and hospital HR departments are notoriously unwilling to deviate from the rule book (maybe ask the hiring manager to intervene with HR – that has always worked for me). I wouldn’t be afraid to fly regardless of the “middle seats open” claim (that’s just a PR illusion since you’re still crammed in with strangers with spitting distance regardless) as long as the airline enforces mask-wearing. The plane’s ventilation system is probably most important of all, but you have no way to evaluate that. All things considered, a direct flight on Southwest would be my top choice. Bottom line for me is if the job is important and the hospital is unyielding, I would take the flight instead of waiting, even though I can’t imagine why a hospital with half a brain about COVID-19 wants remote job candidates fresh off a plane running around a campus they’ll never see again.

From Breach Victim: “Re: Mednax. Just reported a breach of 22,000 patients in July, of which my son was one. He was seen 12 hour after his birth for a total of five minutes by a hospitalist that we found out afterward was contracted through a private physician group that uses Mednax. Our insurer denied the payment, so the five minutes cost $500 out of pocket, and now we have the security breach. Is the hospital liable for any of this?” I’m guessing no since is unfortunately common for hospitals to outsource key services to companies that bill separately, without the patient’s advance knowledge, and without accepting insurance (how is “hospitalist” not a core business of a “hospital?”) The hospital wasn’t a Mednax client, so like your ridiculous bill, they will disavow any knowledge of what the contractors they hired did while rendering services within their building. I would be tempted to sue both the hospital and the practice just because this is litigious America, hungry plaintiff lawyers work cheap, and the hospital should feel some heat that goes beyond paying “consumerism” lip service.

My Christmas wish, beyond seeing COVID-19 go away, is this — please stop saying “build out” instead of just “build,” which expresses precisely the same thought in half the number of syllables (bonus – it also separates you from the big hat, no cattle posers and lingo-flingers who use the term despite never having “built out” anything in their lives). No word or phrase grates on me more, except perhaps faking heartfeltness by leading off a sentence with the superfluous “Please know,” as in, “Please know we in management wish you and yours the best even though we marched you off our property to join the newly unemployed on Christmas Eve.” Remove “please know” and it says exactly the same thing.

Generous donations from HIStalk readers Ben, Michael, Steve, and Dennis – with matching funds from my Anonymous Vendor Executive and other sources – fully funded these Donors Choose teacher requests this morning:

I’m probably one of few people who mentally celebrate December 21, which I can accept as the first day of winter (not my favorite season) only because that also means that every day gets longer from now through June 20. I’ll get another psychological pick-me-up on March 14, when Daylight Saving Time restarts and it gets dark later. Example: the sun sets in Boston today at a ridiculous 4:15 p.m. EST, that won’t happen until 6:50 p.m. EDT on March 14, and our nearest star will remain visible until 8:25 p.m. EDT on June 20. DST may be an irrational policy, but I like it. I would not like living at extreme northern latitudes, however, where the sun never rises in early winter but then never sets in early summer. 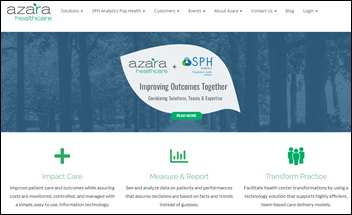 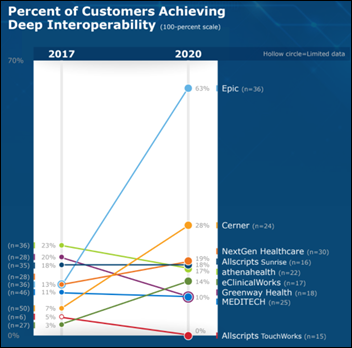 A newly updated KLAS report on EHR interoperability finds that “deep interoperability” (access to outside data, easy location of patient records, visibility of outside data within EHR workflow, and positive impact on patient care) has improved considerably since 2017 except in the most important “impact on care” category. Epic is the clear leader in record-sharing, while Cerner is improving significantly and EClinicalWorks is doing well but isn’t proactive. Little progress has been seen for Meditech, Greenway Health, and Allscripts. Cerner has the highest adoption rate of APIs, especially FHIR ones, while Epic is being selective on which vendors it will work with and is less focused on APIs. 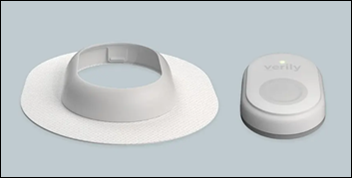 Verily Life Sciences announces Verily Patch, which alerts the user via its Bluetooth-connected mobile app if their temperature rises beyond the threshold they set. The continuous monitoring patch, which is being marketed under FDA’s relaxed requirements for thermometers during the pandemic, lasts 90 days and is offered only to participants in specific programs.

Politico reports that the American Hospital Association has filed an emergency motion to prevent the federal government from implementing price transparency rules that take effect January 1.

HHS OCR imposes a $36,000 HIPAA settlement on a Georgia primary care doctor who ignored a patient’s request for copies of their medical record, received technical assistance from OCR in response to the patient’s complaint, and then again failed to provide copies. The patient finally got their records 13 months after filing their original complaint.

Mass General Brigham apologizes to its employees after a crush of sign-ups for receiving COVID-19 vaccine takes down its appointment system. Meanwhile, only 600 of Howard University Hospital’s 1,900 have signed up to receive its 725 doses, with the CEO saying that they know about the US Public Health Service’s Tuskegee studies of 1932 to 1972, in which hundreds of black men with syphilis were left untreated just to see what would happen.

California is reaching out to foreign countries in hopes of finding 3,000 temporary ICU-trained nurses as the supply of travel nurses dries up due to nationwide COVID-19 demand. The state has 18,359 confirmed COVID-19 patients hospitalized, and its prediction model forecasts that the number could swell to 100,000 hospitalized patients in the next few weeks. COVID-19 patients are occupying 3,600 California ICU beds and Los Angeles County says it has just 30 beds available. 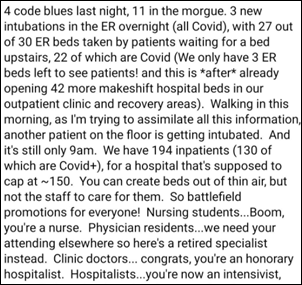 A Southern California hospitalist reports battlefield conditions from his hospital.

A study finds that COVID-19 mortality rates vary significantly by hospital even as overall hospital mortality declines, mostly driven by their level of being overwhelmed by high community case rates. In other words, flattening the curve works, and our current inability to accomplish that portends higher hospital death rates.

A New York Times poll of experts finds that while people who have received COVID-19 vaccine will be safer, they still need to continue most precautions until 70% herd immunity is reached since 95% vaccine effectiveness still leaves a decent chance of being infected with all the virus that is circulating. Two-thirds of epidemiologists say they won’t change their behavior until herd immunity is reached, although they say small-scale socializing is OK as long as all participants have been vaccinated. Once herd immunity is reached, public gatherings, eating indoors at restaurants, and taking public transportation should be safe. This coming summer should be much better, although next winter’s “flu season” will turn into “flu and COVID season” as indoor gatherings create outbreaks. 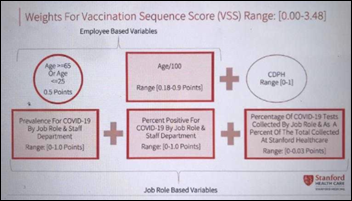 Stanford Medical Center initially blamed mistakes in “a very complex algorithm” and artificial intelligence for excluding most medical residents and fellows from the first wave of COVID-19 vaccinations, but the algorithm was actually just a simple rules-based formula that looks at and the prevalence of COVID-19 testing, positive results, and active infection for each employee’s job role. House staff who deliver direct COVID-19 care apparently fell out of the top risk tiers because they are in the lower-risk age band of 25-65, COVID prevalence didn’t take into account those employees who were infected by patients instead of in the community, and residents didn’t earn priority points for their work area because they don’t have a permanent assignment. An internal Stanford email says that program heads, department chairs, attending physicians, and nurses were not involved in designing the formula. Residents protested publicly after finding out that only seven of the 1,300 of them earned a spot in the first 5,000 employees to be offered vaccination.

A Tennessee hospital whose nurse manager fainted on camera from a longstanding vagal condition just after receiving COVID-19 vaccine last week posts a time-stamped current photo of her in hopes of squelching conspiracy theorists from spreading rumors on social media that she had died immediately. 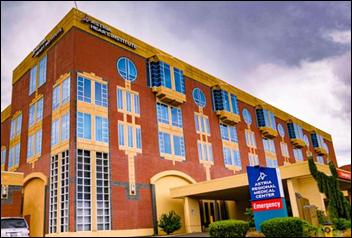 The bankruptcy reorganization plan of Astria Health (WA) gets closer to approval as the health system resolves objections from Cerner, which wanted $10.7 million to be set aside to cover its overdue bills for software and revenue cycle management services. The health system says it did not plan to pay Cerner because problems with its billing system and RCM services cost it $150 million. 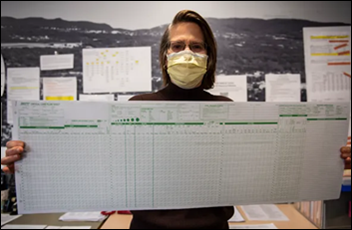 University of Vermont Health Network admits that its month-long computer downtime and return to paper charting was caused by ransomware. Officials say they were never contacted about paying a ransom, however, although the malware provided contact instructions that the health system assumed was for demanding payment. The health system has still not restored 20% of its systems from the October incident, which is still being investigated by the FBI.