The companies have been partners for a little over a year.

Salt Lake City-based Collective Medical, whose product is used in 20% of US hospitals, was valued at $170 million in its most recent funding round in 2017.

Today I learned about the “Texas sharpshooter fallacy,” in which an armchair expert mistakes a random clustering of data points as being indicative of a trend. The title refers to someone who shoots a bunch of random bullets at a blank wall, then paints a target around the tightest grouping to claim expert marksmanship. As with the cherry-picking sharpshooter, data similarities are stressed and exceptions are ignored. The most recent offenses involve COVID-19 and the election.

Talkspace considers putting itself up for sale, leading analysts to speculate that an acquisition could value the online therapy app startup at $1 billion. It has raised $107 million since launching in 2012, and made its first acquisition — a couples therapy app — last year. 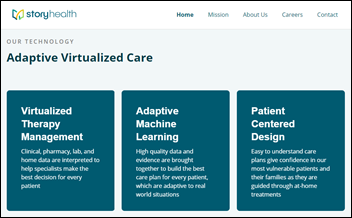 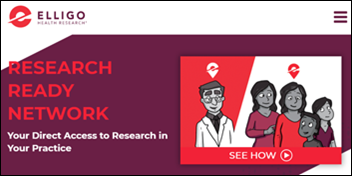 Cerner invests in Elligo Health Research and will use its technology to offer clinical trial opportunities to providers and patients. Allscripts has offered Elligo’s services since 2017. The company was awarded an FDA grant in October 2019 to work on real-world data harmonization for 21st Century Cures Act data sharing use cases. 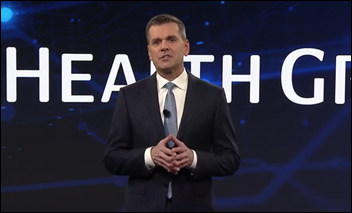 I listened to the business overview by UnitedHealth Group CEO Dave Wichman at the company’s virtual investor conference, assuming that the strategy of a company that has a $330 billion market cap, that expects $277 billion in 2021 revenue, and that has penetrated every aspect of healthcare and insurance is worth hearing. Clearly UHG is targeting every profitable aspect of healthcare in a way that will turn the hospital industry on its ear and is leading the charge with its high-growth Optum business. UHG  says it has 3.6 million customers covered by some degree of value-based care in 44 states and is pushing hard to move surgeries from expensive hospitals to ambulatory surgery centers. Points:

Johns Hopkins Health System names interim Sibley Memorial Hospital President and COO Hasan Zia, MD, MBA to the permanent role. He is an informaticist who served as Sibley’s CMIO from 2011 to 2015 and led its Epic implementation. 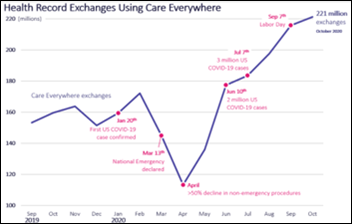 Epic’s Care Everywhere reached 221 million health record exchanges in October 2020, up 40% from the same period a year ago. 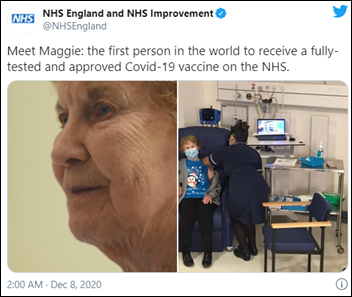 In the UK, a 90-year-old grandmother gets the first shot of Pfizer’s COVID-19 vaccine. In the US, Pfizer’s vaccine cleared FDA’s safety and efficacy review on Tuesday, and if the company’s data is accepted in Thursday’s advisory committee review, the first doses could be administered by this weekend.

HHS publishes COVID-19 hospital capacity data at the facility level on a weekly basis dating back to August 1. Previous data sets were compiled by state. A group of data journalists, data scientists, and healthcare system researchers who have reviewed the data have put together a FAQ. 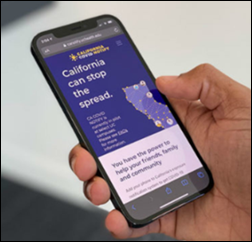 California Governor Gavin Newsom announces that CA Notify — an app-based, COVID-19 exposure-tracking tool — will launch statewide later this week. The app was developed using technology from Google and Apple and was piloted at the University of California. Several regions across California have imposed stay-at-home orders through the holidays in an effort to alleviate virus spread. The state reached a single-day record of 34,000 new cases on Monday.

Meanwhile, a New York Times review notes that US consumers and state governments have shown little interest in using the Google-Apple COVID-19 smartphone exposure notification app that California is launching statewide. Only 13 states have developed their mandatory public health add-on to the app (it has since been made optional) and most of those states are seeing single-digit percentages of residents using them. Experts also note that people are loading the app to receive warnings of their exposure to infected others, but then refuse to allow the app to notify their fellow users when they themselves test positive.

COVID-19 vaccines have not been tested to see if they prevent transmission of coronavirus, meaning that people who have been vaccinated still need to wear masks because they could still be contagious. Nobody knows whether enough antibodies will circulate to the nasal mucosa to prevent its growth there, which is why some respiratory virus vaccines work better as nasal sprays. 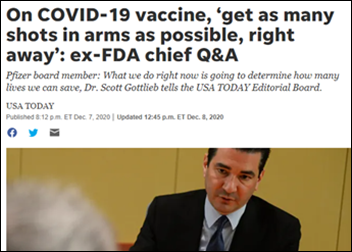 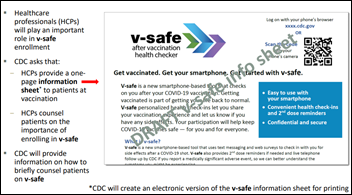 The CDC’s text messaging system that COVID-19 vaccine recipients can voluntarily use to report side effects — which was developed by Oracle and HHS as part of Operation Warp Speed — contains security vulnerabilities, experts say. Anyone who gets the QR code that is contained in the patient immunization kit – such as when it is discarded — can file false reports to the V-safe system that would need to be evaluated. The federal government issued a $2.3 million contract to an IT company to process the incoming reports.

Experts warn that otherwise careful workplaces are exposing their employees by allowing them to socialize and eat together in break rooms, as happened in Mayo Clinic.

More than half of surveyed Fire Department of New York union members say they will not get a COVID-19 vaccine if the department offers one, even though their jobs make them 15 times more likely to be infected. 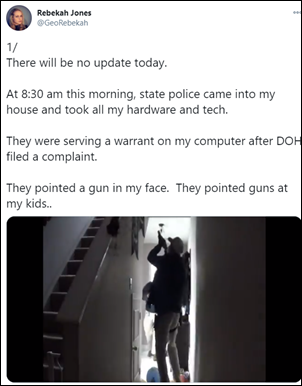 Florida state police raid the Tallahassee home of Rebekah Jones, a former state data scientist who was fired in May for insubordination following what she says was her refusal to manipulate data to make Florida’s COVID-19 dashboard data look more favorable for reopening as Governor Ron DeSantis was urging. The state’s health department says someone using the Comcast IP address of Jones logged in to its emergency messaging system on November 10 to send messages that were critical of the state’s response. Ten armed FDLE agents entered her home and, according to Jones, pointed pistols at her husband and two children before seizing her computer equipment.  The incident was recorded on her home’s security camera. The state FDLE says that Jones refused to open the door and that weapons were not pointed at anyone. 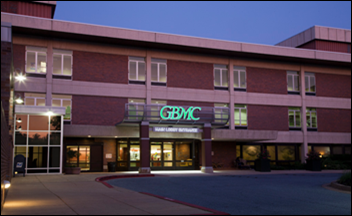 Greater Baltimore Medical Center deals with a ransomware attack that forced it to take down several of its IT systems on Sunday. Reports suggest the ransom note came through a fax machine (!!), demanded a response within three days, and provided contact information using the Dark Web.