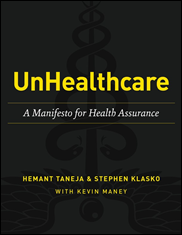 Non-healthcare people who sell books or companies are always predicting the suddenly imminent rise of consumerism that will upend the deeply entrenched healthcare establishment. They say (and sometimes even believe) that our smart phones will empower us consumers to Uberize an industry of insurers, drug and device manufacturers, doctors, health systems, and politicians. Our discretionary healthcare spending and technology assets will force them to cower to our demands to be treated as individuals and choice-empowered customers.

Do you feel more empowered in your dealing with hospitals, doctors, pharmacies, and your insurance company? Has your phone disrupted the status quo and created a choice-laden healthcare environment of competition and price transparency? Has your armada of consumer technology made you healthier? You probably won’t like this book if not, because it is re-promising a brave new healthcare world in arguing that the old one can’t survive despite the fact that the entrenched players keep getting bigger, richer, and more influential.

Hemant Taneja started and sold Livongo and other companies, making him a billionaire. Steve Klasko, MD, MBA runs Thomas Jefferson University and Jefferson Health, and while I guess he’s not quite in the billionaire category, he has augmented his generous Jefferson millions with lucrative board seats and participation in a freshly planned IPO of Teneja and other Livongo alumni. The world view of the authors isn’t necessarily yours or mine, either as industry participants or patients.

Both authors think that Livongo’s diabetes management technology was a game-changer, although last time I looked, we still have a few dozen million diabetics in the US, many of whom can’t afford insulin, much less Livongo. Livongo certainly did a good job in convincing employers to pay for its service and also convincing Teladoc Health to buy it for $18.5 billion so it could offer something that is synergistically sexier than selling plain old telehealth visits, but I’m not smart enough to determine whether it measurably improves the health of its users or the medical costs they incur, much less that it has revolutionized American healthcare as a whole.

The authors believe in the concept of “health assurance,” where people keep themselves healthy by being constantly wired up to sensors that pump out a continuous stream of real-time data that is dutifully and invisibly overseen by artificial intelligence. This, they predict, will “help us mostly forget about doctors, pills, hospitals, and insurance companies.” It will be consumer centric, data driven, cloud based, and built using open technology standard and empathetic user design (Taneja’s technologist identity comes out pretty strong here in focusing on the geek factor).

The key to reinventing healthcare, the authors insist, is bringing in tech startups, rewarding them with billion-dollar valuations, and then standing back while they disrupt everything in sight. I’m not opposed to that idea, but the track record of eager, naive outsiders hasn’t been pretty. Nobody knew healthcare could be so complicated.

Healthcare wasn’t built to be consumer friendly, the authors argue convincingly. It was built on the concept of mass production to address the scarcity of doctors, hospital beds, medical devices, and drugs that doesn’t really exist today. Baby boomer demographic changes, along with employer-provided health insurance, marginalized patients as a mostly powerless widget that was milked profitably by various healthcare fiefdoms who always blame everybody else for high cost and low quality. All of this is true.

Klasko explains that Jefferson Health paradoxically had to scale up (via acquiring competitors and starting new businesses) to allow it to eventually unscale sometime down the road. He claims Jefferson will then emerge butterfly-like as a wellness brand with no physical address, freed of the incentive to crank out profitable procedure volumes. Sounds great, but I haven’t seen many examples where the health system that was scaling up voluntarily took a less-profitable but more consumer-centric path down the other side. Expecting people or companies to do something that doesn’t pay them the most is usually cause for disappointment.

I can’t decide whether Klasko’s business dealings make him a better or worse advocate for a new business model for non-profit healthcare systems, but “non-profit” is more about accounting than mission for many health systems these days anyway. Still, both authors stand to make even larger fortunes if their tech company healthcare bets pay off, so maybe a bit of skepticism is warranted when their tech hammer is on the lookout for nails to pound.

Back to the healthcare assurance concept. You don’t need to have physicals or see your doctor until AI – which will be provided by a health system as part of a pre-primary care subscription — flags your data as unusual. Then you will complete a chatbot questionnaire and then see a doctor – probably virtually – and if something seems amiss, booking your appointment online, being updated with SMS messaging that eliminates the need for a waiting room, and spending time actually talking to the doctor since they don’t waste visit time taking measurements that the sensors have already sent them. That makes good sense, depending on the accuracy and completeness of the available sensor inventory (which is minimal at present).

I’m not sure I agree with the authors that the next logical step is that pricing will become transparent and insurance will return to its original form as being a hedge against risk, not a way to pay for routine services that are otherwise unaffordable. You would need more than 134 pages to explain how that could happen. UnitedHealth Group has more money that even Hemant Taneja and seems disinclined to make less of it.

Taneja is an investor in Ro and he loves their model of cranking out telehealth visits to sell ED and insomnia prescriptions online. Whether that is a consumer-friendly innovation or a lapse of professional responsibility by its doctors is beyond the scope of this discussion. The psychology of men who are embarrassed to tell their in-person doctor about their receding hairlines is probably different from someone who is facing a life-threatening condition that will never go away.

The authors also like the tech-heavy healthcare membership system of Forward, which uses biometrics, blood tests, genetic analysis as a baseline to then offer monitoring and unlimited visits for $149 per month, with no insurance accepted. They think that services like this could be targeted to subgroups such as those over 70, pregnant women, or young athletes as a form of unscaling. This seems perfectly logical and immediately achievable to me, although I’m sensitive to the fact that while many of us can afford these cash-only services, most Americans can’t and will still be staring at “The View” while being coughed on by the fellow occupants of whatever waiting rooms are left.

Health assurance would require fewer people in administration, but more in customer service, marketing, and technology. High-income proceduralists (dermatology, radiology, orthopedics) would become less valuable and thus paid less than family doctors and pediatricians. Medical schools would need to place less value on memorization skills and instead look for incoming students who exhibit empathy, creativity, and communication since they will need to treat the entire patient (sleep, diet, exercise, etc.) Hospitals will become the post office in the age of email, and insurers will be hurt most as the need for their middleman services is greatly reduced. If you want to disrupt those huge, highly profitable entities that will spend whatever it takes to keep the goose laying golden eggs, you’re going to need a bigger boat.

The authors posit that we’re at a tipping point (aren’t we always, according to authors?) because of the weaknesses COVID has exposed and the high premiums and deductibles of health insurance, which will turn most people cash payers against their will and encourage them to seek good experiences at good value.

From the regulatory point of view, the book calls for a single national medical license (agreed) and to redefine FDA’s role in safety and efficacy in regulating only the former and letting the market judge the latter (they say Livongo was held back by FDA’s efficacy requirements, wah).

As a curmudgeonly skeptic (or experienced realist, perhaps) I agree with some points of the book, but I would not predict a mass overhaul of a system that regularly lines lawmaker pockets to retain the status quo, especially if companies expect cash-strapped Americans to cough their own money to pay for gadgetry and services that mostly interest the worried well who are striving for data-powered immortality. In that regard, I would say this book’s emphasis on highly valued startups and profitable disruption makes it more of a business read than a balanced review of meeting society’s healthcare needs equitably and funding it as a public good. As a non-profit hospital lifer, I’m already uncomfortable with the idea of having a hospice owned by a private equity firm.

I’m also not convinced that today’s sensors and the invasive nature of wearing them can provide enough data to function like a car’s gauges and warning lights for a remote observer. The connection between DNA and health, or even medical treatments, has barely been touched, and has little impact on medical decisions. We haven’t asked doctors what information they would need to replace the traditional exam, assessed whether today’s sensors can provide that data, or proven that streams of patient data makes them healthier or avoids cost (and in fact, whether we should also ask them how they feel or have concerns that sensors can’t measure). Do you want your doctor to be a trusted life ally or a savvy mechanic, and what are you willing and able to pay for your vision of healthcare?

My review of “The Patient Will See You Now,” I realize, is similar to this one, although that review was funnier and snarkier. That book came out nearly six years ago – are we disrupted yet?