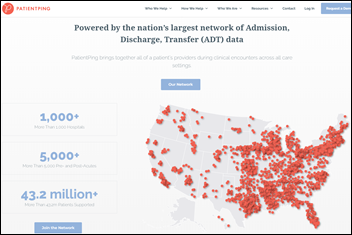 PatientPing raises $60 million in a Series C funding round, increasing its total to more than $100 million.

From X-Treem Geek: “Re: Duke–UNC anti-trust lawsuit brought by physicians. Looks like they will soon face a new lawsuit for faculty.” Duke University and University of North Carolina paid $54.5 million in mid-2019 to settle a class action lawsuit in which academic physicians found evidence of a decades-long “no poach” agreement in which the schools agreed to avoid recruiting each other’s doctors to keep salaries in check. The new case seeks damages for non-medical faculty members who were not part of the original lawsuit.

Cerner tells me that tiny analytics vendor Surgisphere – which is under fire for its use of EHR data of unknown provenance to publish error-filled, now-retracted COVID-19 research studies – is not a Health Facts customer. Surgisphere has declined to disclose how it obtained a massive database of de-identified patient encounters from hospital EHRs, and many large health systems say they’ve never provided such data to the company. Meanwhile a non-profit in Africa that was using a Surgisphere-provided COVID-19 Severity Scoring Tool powered by the same database rescinds its recommendation of the software.

June 10 (Wednesday) 1 ET. “COVID-19: preparing your OR for elective surgeries.” Sponsor: Intelligent Medical Objects. Presenters: Janice Kelly, MS, RN, president, AORN Syntegrity Inc.; David Bocanegra, RN, nurse informaticist, IMO. The presenters will cover the steps and guidelines that are needed for hospitals to resume performing elective surgeries and how healthcare information technology can optimize efficiencies and financial outcomes for the return of the OR. 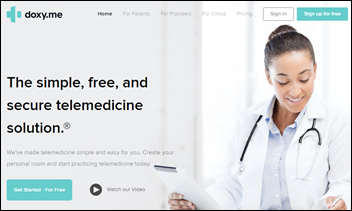 Business Insider profiles Doxy.me, which saw the user count for its browser-based telehealth platform jump from 80,000 in January to 700,000 now. The company is run from the house of the CEO, Medical University of South Carolina Assistant Professor Brandon Welch, MS, PhD, whose doctorate is in biomedical informatics. Headcount has increased from 15 full-time employees to more than 50. The company says it isn’t interested in the pitches it is suddenly getting from venture capital firms that have until now characterized telehealth platforms as a commodity. Welch, who says the company’s main competitor is Zoom, concludes, “The only thing providers care about is a way to connect with their patients. They don’t need all the other crap that other telemedicine solutions are providing. We just keep it simple and made it easy to sign up.” Doxy.me’s basic product is free, with paid upgrades available for expanded functionality and institutional use. 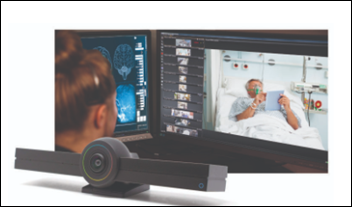 Banyan Medical Systems offers its virtual care and telemedicine platform with no upfront costs to eligible hospitals that are waiting for funding from FCC’s COVID-19 Telehealth Program. I did a double take at the company’s information page that says funding expires on June 31, 2020, a day that will live in infamy for not actually existing.

A Black Book survey finds that 93% of hospitals and large physician practices have seen financial IT system shortcomings exposed during the pandemic. Most CFOs say they will not reduce or defer financial system spending as they look to IT to improve revenue capture and to provide analytics and forecasting support.

Nemours Children’s Health System (FL) saw its telehealth visit count jump from 800 in April 2019 to 30,000 in April 2020, where it uses InterSystems technology to exchange information between its EHR and the its CareConnect virtual system for scheduling appointments.

OptimizeRx says that a partnership with an unnamed organization will expand the reach of its specialty medication platform to 300 health systems that use Cerner and Epic.

Insurers, hospitals, and unions are pushing Congress to spend $100 billion to pay the COBRA insurance payments of 27 million laid-off workers who would basically get their health insurance for free. They are also supporting expanded ACA subsidies and Medicaid, but expect the COBRA bill to gain the widest support in Congress since it bypasses ACA-related politics. 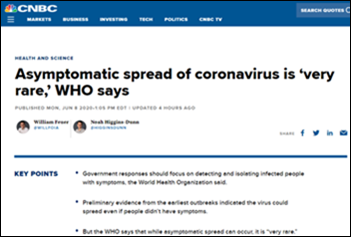 WHO makes a questionable statement that people who are free of COVID-19 symptoms don’t spread the infection, failing to differentiate between “asymptomatic” (infected patients who never experience symptoms) from “pre-symptomatic” (those who are infected but don’t exhibit symptoms until days later). WHO based its conclusion on a tiny review of contact tracing in China, whose findings are not in agreement with four rigorous studies that used actual data instead of people who simply speculate that their infections came from someone with symptoms. The resulting mass media clickbait interpretation makes the definitive statement that people won’t become infected if they avoid those with obvious symptoms, which could affect mitigation strategies such as encouraging social distancing and wearing masks. UPDATE: WHO clarifies that 6-41% of people who are infected don’t have symptoms but can still spread it, with 40% of infections coming from those symptom-free people. WHO says it regrets calling such spread “very rare.” Bottom line: nothing new has been learned and WHO takes a black eye for allowing scientists to confuse the public with poorly worded or researched comments, although they are at least allowing scientists to speak without bureaucratic filters. WHO also said in its correction that nobody should assume that its employees who are speaking at press conferences are speaking on behalf of WHO, which is truly bizarre.

Experts warn that temperature screening of employees and customers provides false reassurance given New York data showing that 70% of people admitted to the hospital for COVID-19 did not have a fever. 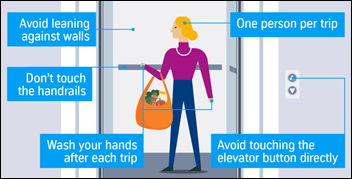 Getting people back to work in high-rise office buildings that house thousands of workers creates a new problem with social distancing – limiting the number of people who are allowed in an elevator simultaneously while avoiding having them log-jammed in close proximity in the lobby.

HHS will run out of its free supply of remdesivir by the end of this month as Gilead tries to ramp up production of the antiviral, whose modest benefit to hospitalized COVID-19 patients was enough to convince HHS to distribute it to some hospitals. 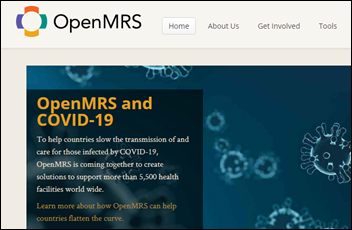 Mozilla names the OpenMRS EHR as one of three open source winners of a $50,000 grant from its COVID-19 Solutions Fund. The award will be used to create the OpenMRS Public Health Response system that will include data collection tools, reports, and interfaces with public health systems.

Tuesday saw mixed messages from CMS Administrator Seema Verma on telehealth. She told STAT that “it would not be a good thing to force our beneficiaries to go back to in-person visits,” but then hinted that CMS needs to look at whether it should pay the same rates as in-person visits. She then said in an announcement encouraging the reopening of healthcare facilities that “while telehealth has proven to be a lifeline, nothing can absolutely replace the gold standard: in-person care.” I’m wondering if those who jubilantly predicted that the telehealth genie could not be put back in the bottle may have overestimated, as it seems clear that many providers and patients prefer in-office care; practices are more efficient (and therefore more profitable) when their providers are flitting between multiple exam rooms simultaneously, using non-physician helpers optimally, and perhaps upselling other services; kludgy solutions like Zoom and Skype offer an underwhelming, make-do experience; and the couple of months of virtual-only visits may not have been adequate to permanently change habits. All it would take is a pullback in CMS’s emergency payment and licensure policies to fill the waiting rooms again. 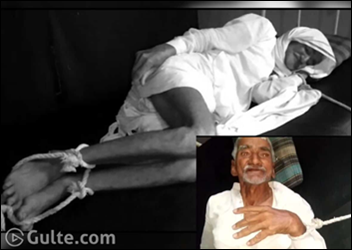 In India, a state government investigates the case of an 80-year-old hospital patient whose family could pay only part of his bill. The hospital, worried about collecting the balance owed, refused to discharged the man and instead tied him to the bed.