We are a hospital with numerous clinics making about $350 million per year in gross revenue with an average profit margin of 1.3% over the last 10 years. Our best estimate is that we will lose $10 million per month that this continues. That doesn’t even take into account our cash reserves that keep us afloat, which are being decimated in the market. We absolutely will see hospitals go bankrupt and/or be acquired this year without a bailout. (Bobby Bailout)

[COVID-19 testing data]. Epic has released functionality (COVID-19 Pulse Dashboard) that will aggregate de-identified data across their organizations. Considering they boast that their organizations cover half the US population, I would think they should be able to get some good aggregated data soon. Hopefully they do a good job of collecting the right metrics and cooperating with research institutions to help bring out some of this data. I hope Cerner is also looking to or already is doing something similar considering they also have a large share of US population. (AC)

I will think twice before ever booking our hotel rooms through OnPeak again. If we would have booked through the hotel directly, we would have been able to cancel with no fees. If you book with OnPeak/HIMSS, you lose your shirt. For what? A small room discount? Live and learn. (Jennifer)

On the practice side, most places have a little door barricade set up. People get a symptom check in the barricade one by one before they get in the waiting room area. People are told to call for instructions before approaching the clinic. On the hospital side, most of the clinical folks I’ve talked to have been told not to talk about internal details with the public. (What) 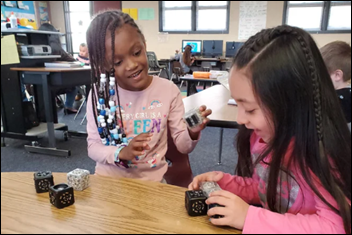 Readers funded the Donors Choose teacher grant request of Ms. P in California, who asked for robotics programming blocks for her kindergarten class. She reports, “The Cubelet blocks were exactly what I needed to connect computer science principles to solving real world problems. Our first experiment with the Cubelets was a simple challenge, to connect the blocks so their robot would move around the table and then stop. The kids were so excited to work together, every member of the group was trying different combinations and excitedly chiming in suggestions. I listened to these five year olds problem solve and collaborate and thought, ‘Wow. These are exactly the 21st Century skills that they need to be practicing.’ Thank you so much for giving us these high interest, durable robot blocks. You’ve made my class very happy, and given me a tool I will be using frequently in the future.”

Carnival offers the federal government use of some of its cruise ships as temporary healthcare facilities for non-coronavirus patients in major coastal cities, potentially freeing up hospital beds for treating COVID-19. 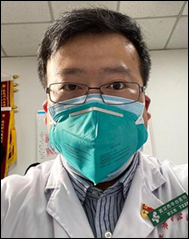 China exonerates a Wuhan doctor it had reprimanded for warning about the coronavirus outbreak in an almost unheard-of admission by the Communist Party that it made a mistake. The party apologized to the family of Dr. Li Wenliang, who died of COVID-19. The government’s treatment of the doctor stirred uncommon public anger, with complaints that it was hiding outbreaks, punishing journalists, and valuing its own image over public safety. Several citizen journalists and critics were arrested and some disappeared after sharing information online about the outbreak. Insiders also claim that Wuhan’s claim of zero new cases is untrue because the local government suspended testing and discharged quarantined, symptomatic patients early to make President Xi Jinping look good during his scheduled visit there.

A California private practice doctor offers appointment-only drive-up coronavirus testing outside his office, with cash prices starting at $200. He has performed 40 tests, received eight results, and identified one positive patient. Mask shortages have forced him to buy from Craigslist scalpers. 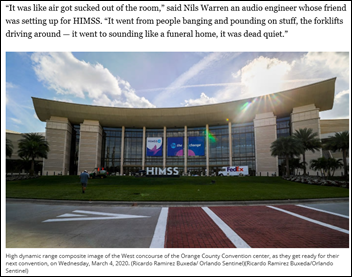 Ten conferences that have been cancelled at the Orlando’s Orange County Convention Center have hit the area with a $363 million economic impact. HIMSS is mentioned as working by mid-February to arrange on-site medical services to convince exhibitors not to pull out. The local paper intercepted emails from HIMSS in which it expressed dissatisfaction with the Visit Orlando convention bureau, which it said was not supporting the conference by agreeing to distributing attendee health information at local hotels. The photo above was taken on Wednesday, March 4, the day before HIMSS20 was cancelled. 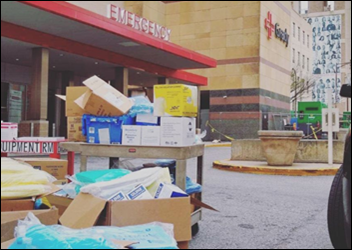 Fox’s “The Resident” TV drama, which is filmed in Atlanta, donates masks, gowns, and other supplies to Grady Hospital. “Grey’s Anatomy” and “Station 19” have donated masks and gloves to a Los Angeles fire station.