From ItsMoreThanAGig: “Re: HIMSS20. As a HIMSS staff member, I can verify how incredibly difficult this decision was today and how painstakingly careful our leadership was in fact-gathering, deliberation, etc. As our CEO said on a call today, it is ‘heartbreaking’ for all of us at HIMSS, and that truly is the case. When you work your a** off for an entire year — sacrificing evenings and weekends away from family to build out programming, communications, logistics — it’s exactly that: heartbreaking. However, we’re optimistic about the opportunities that this situation leaves us with in the form of virtual presentations. Lots to figure out in the near future. But as a HIMSS insider, I can honestly say we really do put the best interest of our members and attendees first before profit or otherwise. We all BELIEVE in the mission of HIMSS and the power we can hold in numbers.”

From Jenga: “Re: HIMSS20. What will you miss most from the cancellation?” I will most miss being able to write about what I see and hear from the viewpoint of a normal attendee. I enjoy my normal routine of summarizing news and adding occasional pity asides or experience-based insight from the cheap seats the rest of the year, but I get just this once annual chance to roam around and describe what it’s like to be at the conference. I would always get giddy with fatigue from heading straight from the convention center to the keyboard and then staying up until midnight or 2 a.m. putting it all down on the screen sitting alone. I have fallen asleep from exhaustion at the keyboard a few times, but that’s part of the fun of living a fantasy of free-form, rules-free pseudo-journalism that can be simultaneously bizarre and informative. I may have to take a writing class or something to channel my modest creativity.

From Implore Me: “Re: HIMSS20. What will the impact be on the organization?” Brutal, I suspect, given that the annual conference contributes about one-third of HIMSS’s total revenue per my recent analysis. HIMSS made just under $1 million in profit in its most recent tax year,  and the annual conference brought in about $15 million in profit on $30 million in revenue. The cancellation will likely spill over into its second-biggest revenue source of publishing. I don’t know what kind of insurance HIMSS carries for operating the conference, but I doubt it covers lost profits. There’s also the unknown downstream effect on HIMSS21 attendance and exhibition for two reasons: (a) the uncertainty is now obvious and those who feel wronged by the cancellation, for whatever reason, may carry their displeasure over to HIMSS21; and (b) exhibitors may decide, with a year off to think about it, that the cost of participating in the HIMSS conference may or may not be justifiable in their particular case. I don’t agree with everything that HIMSS does, particular when it strays into areas that don’t seem appropriate for a non-profit member organization, but it would be sad to see HIMSS marginalized by circumstances beyond their control. You have to have attended lame and now-dead competing conferences like MHealth and TEPR to realize how easily poor execution can turn into a death spiral. Ordinarily HIMSS would this week allowing companies to start begging for good booths at HIMSS21 with the assurance that the good ones would all be taken immediately, but I doubt that’s the case now.

From Chevy De Novo: “Re: HIMSS20. There’s a COVID-19 health concern, but just 11 US deaths out of 352 million people, and we do nothing about flu that kills 15-30K. The sky is falling even though Florida has just two cases and Orlando brings in more than 100K people per day to the theme parks alone. The ramifications of cancelling are far and wide. Startups were counting on HIMSS to jumpstart their business, and many won’t be in business by year’s end having spent half or more of their marketing budgets on this non-show. Non-refundable airfares, hotels, booth shipping and setup, ad revenue from journals who now have no HIMSS coverage to leverage ad sales against, and the list goes on. HIMSS didn’t have a choice because if it didn’t cancel, people would say they put profits first. Now they will catch flack anyway, especially since they are not refunding registration fees are instead applying credits to HIMSS21. I would not have wanted to make the call, but I would have said let the show go on, and if you choose to cancel your booth space, don’t ask us for money back. Now HIMSS is majorly screwed and may even face lawsuits, which could have long-term ramifications for the organization. It’s going to get ugly.”

From Back Home: “Re: HIMSS20. This hotel cancellation link appears to still be alive.” The OnPeak HIMSS20 refund request form is still online, but I don’t know if submissions are being monitored.

From YooHoo: “Re: HIMSS. It is reminding people about ‘not using their brand.’ Apparently they aren’t keen on ‘Virtual HIMSS’ and speakers and exhibitors trying to salvage the investment they made in HIMSS20.” HIMSS is right to ask people to avoid using its trademarked name in their unsanctioned activities, no matter how well intended (‘Virtual SXSW’ would be equally poorly received by the group whose name is being used by others). Luckily nobody needs to apply the HIMSS name to market their virtual activities. UPDATE: HIMSS has announced that it will resurrect its previous “Virtual HIMSS” efforts from years ago in offering some HIMSS20 sessions online.

From Ja Rule: “Re: FHIR Festival. Good joke!” Someone with a few dollars and a good sense of humor launches a website for “FHIR Festival, The HIMSS20 Alternative,” in which Ja Rule will take President Trump’s speaking slot and Elizabeth Holmes will be in the house. I would have added some caustic wit about selfie-obsessed influencers since we have those, too, and I suspect that some of those are being paid as they were for the Fyre Festival. HIMSS was probably wise to not take Fyre Festival’s “Let’s just do it and be legends, man” approach.

From Epic Trench Warrior: “Re: Epic banning customers from using automation software. Epic supports customers doing RPA work with several vendors, such as Olive. But Epic has seen some real disasters, such as 40,000 patient records corrupted by a vendor’s script that damaged med lists and took thousands of hours of Epic and customer time to clean it up. They have also had vendors use brute force techniques that create exceptionally high system loads. Epic requires the third party and customer to sign off acknowledging  the risks, obligations, and safeguards. They also ask the third parties not to patent a combination of on-screen steps that simply mimic what an Epic user would do and then sue Epic or a customer if someone else develops a similar script. And of course Epic does not steal their scripts.”

The most recently used patient engagement technologies are almost everything except online or app-based education, telehealth, and care team collaboration (ignore the displayed percentages because the polling tool counts votes rather than individuals with multiple-answer responses).

New poll to your right or here: For those who had planned to attend HIMSS20: was cancelling it the right call? 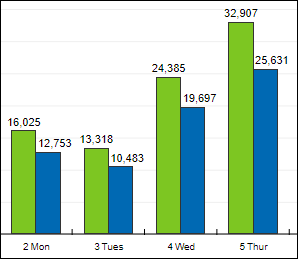 Thursday was the busiest single day in HIStalk history by far, with 32,907 page views in 25,631 unique visits. I’m honored that people came to me when looking for HIMSS20 news, although I’m not exactly proud of achieving a success metric due to an unfortunate incident. 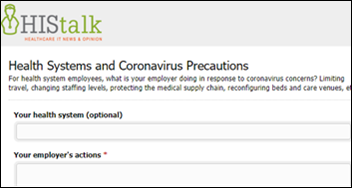 I published great responses to my exhibitor survey about the HIMSS20 cancellation. Lost in the shuffle of the cancellation was my earlier health system survey about coronavirus precautions – I’m still interested in what’s happening out there.

I enjoyed the later sunset on Sunday but was still feeling robbed of the extra hour when it occurred to me – not attending HIMSS20 will give me an entire week back. 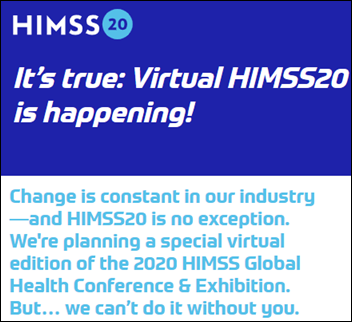 HIMSS will develop a special virtual edition of HIMSS20 and is asking members which sessions they would like to see. 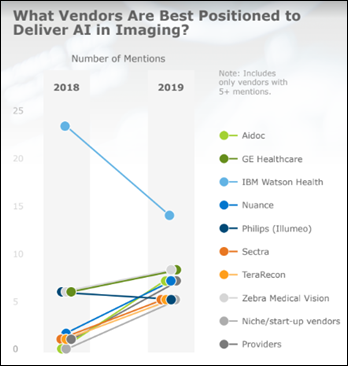 A new KLAS report on AI in imaging finds that use has accelerated, with nearly half piloting or using imaging AI, others saying they are close to deployment, and deeper adoption expected as radiologists and cardiologists begin to see the value. IBM Watson Health is most often mentioned as being well positioned, with Aidoc and Nuance gaining the most mindshare. Providers place great weight on the references of colleagues when making purchasing decisions. 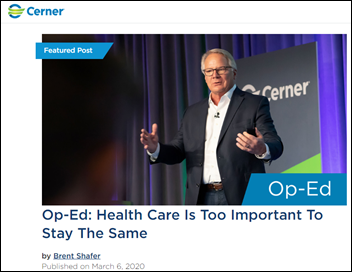 The passage of these rules has become needlessly controversial, opposition stemming largely by businesses that have financial interests at stake. This is especially frustrating as most healthcare providers, polled by Reaction Data, predict favorable impact from the rules’ release. Now is the time to support the government’s role as an enabler of private sector innovation and competition in its efforts to ensure patients’ rights to access their information … We strongly oppose any business practice that willfully prevents the flow of information. We believe empowering consumers is the right thing to do. We welcome the innovation that will be unleashed by open and interoperable healthcare data. As technology advances, there are new opportunities for digital products to support providers and individuals in managing their health and wellbeing. We encourage the immediate release of the ONC and CMS interoperability rules because healthcare is too important to stay the same. And we believe that in a seamless and connected world, everyone thrives.

A reader says two Orlando organizations that might be able to use donated conference items are Boys & Girls Club of Central Florida and Orlando Day Nursery. Repurpose that booth swag, y’all. 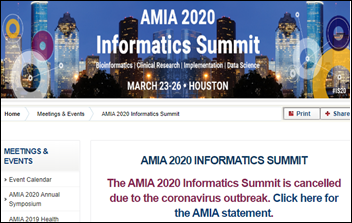 AMIA cancels its 2020 Informatics Summit that was scheduled for March 23-26 in Houston due to coronavirus concerns. AMIA is considering offering panels and presentations virtually on the original dates. Its Clinical Informatics Conference May 19-21 in Seattle is still on for now. 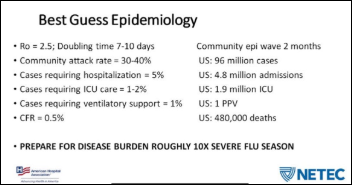 An American Hospital Association-commissioned  presentation to hospitals warns that COVID-19 could create a disease burden 10 times that of flu in the US, with 96 million cases, 4.8 million hospital admissions, 1.9 million ICU admissions, and 480,000 deaths (the timeline was not provided). Stats I’ve seen suggest an unfathomably rapid ramp-up, to the worst-case point that we’ll run out of hospital and ICU beds in the next few weeks. Meanwhile, CDC advises people over 60 and those with underlying health problems to avoid crowds, including traveling by air, attending movies and concerts, and going to church. The novelty of reporting the number of US cases, the number of states that have reported deaths or declared public health emergencies, and countries that are sealing off borders thinking they can create an infectious disease moat should be wearing off almost immediately as the new status quo. Let’s hear more about what experts are learning as they study more cases and how hospitals are preparing for the ample challenges they face. 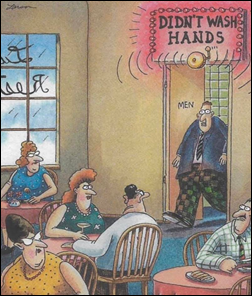 The Far Side was right: we need this.

Weird News Andy apologies for titling this story “Domo Arigato Mr. Roboto” since it’s a Japanese name referring to China, but at least he welcomes our robot overlords. China deploys robots to combat COVID-19, using them to disinfect, take temperatures, and to perform dangerous cleaning and food preparation jobs.