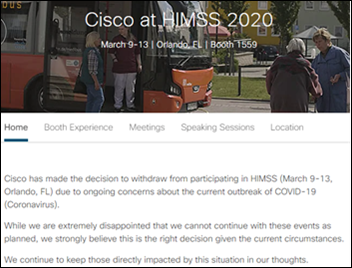 Cisco withdraws from HIMSS20 due to COVID-19 concerns.

HIMSS filed its most recent coronavirus update Thursday, reporting a registrant cancellation rate of 0.6%. This may be misleading, however, since the organization offers refunds only to registrants from specific countries, meaning that most people who have changed their minds about attending would not necessarily bother to notify HIMSS.

Any potential cancellation of HIMSS20 would probably need to be announced in Monday’s update to allow time to notify registrants. HIMSS has not given any indication that it plans to cancel the conference.

Several companies that are scheduled to exhibit have recently cancelled their own user and sales meetings. HIMSS20 exhibitor Workday, for example, cancelled its sales kickoff meeting that was scheduled for March 2-4 in Orlando. Readers have said that Intel, Salesforce, and Amazon won’t participate, although those companies have not made any announcements.

Most respondents to this week’s snap poll – which is not vetted — say they haven’t changed their HIMSS20 plans, although 15% of respondents indicate that they are US residents who won’t attend as planned after all.

Readers who are epidemiologists or public health experts and are registered to attend HIMSS20 – will you still attend, and if so, will you take any non-obvious precautions? I’m also interest in hearing from employees of companies who have decided not to send employees to Orlando.

From Wizened Sage: “Re: MDLive. Changes at the top – chief medical officer, CEO, CFO.” Rich Berner is still listed as CEO on the exec page, but a reader said his resignation was mentioned on a medical directors’ call. CFO/COO Dan Monahan left in November after 10 months and Chief Medical Officer Lyle Berkowitz, MD moved on last month after a couple of years. Comparing the executive web page from April 2019 to the current version shows that seven of the 13 are no longer listed. 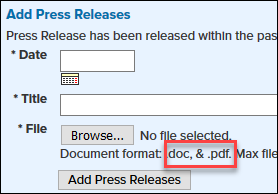 From Doc X: “Re: HIMSS exhibitor press release upload portal. My upload failed and I noticed that it accepts only .doc files, which were superseded in Word in 2003 by .docx. So a state of the art health IT conference is using 23-year-old information exchange infrastructure?” I’m actually surprised that the third-party service HIMSS uses accepts Word documents at all instead of requiring PDFs, where formatting is consistent and the threat of malware micros is zero. PR people sometimes email me announcements as Word documents, which even if I wasn’t worried about malware, would go right to my trash folder anyway because it means they are greenhorns. I’m not blaming HIMSS since the technology still works as long as the submitter is willing to do a “save as.” I also think there may have been a time when non-Microsoft word processors such as Open Office and maybe even Apple Pages could export only as .doc files, so this might actually be a commendable interoperability provision. 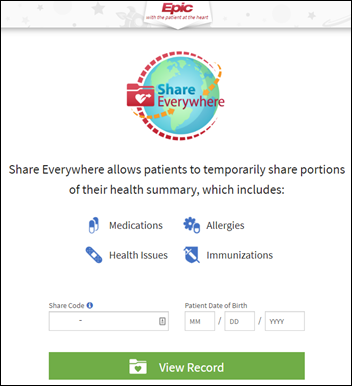 From Being There: “Re: ZDoggMD’s claim that patients can’t share their Epic data with providers that use a different EHR. I can say as a user of an Epic-enabled mobile app through my PCP that this is categorically untrue. The Share Everywhere option on the mobile app gives any provider one-time, limited access to meds, allergies, health issues, and immunizations. They can even write a clinical note to my care team.” ZDogg also ignores Carequality EHR-to-EHR data sharing, which in also being connected to CommonWell allows sharing information with just about any EHR whose vendor wants to support doing so. I wonder if the EHR that ZDogg designed for his failed Turntable Health had interoperability capability since he’s so passionate about it.

From Midship: ”Re: HIMSS20. What is the financial impact to registrants if it is cancelled?” HIMSS policy is that you don’t get a registration fee refund – it rolls over to HIMSS21. Hotel reservations booked through HIMSS are non-refundable, so you’re out those costs along with flights unless you bought comprehensive travel insurance, which may or may not cover you anyway unless you got the expensive “cancel for any reason” coverage or purchased before COVID-19 became a known event that is therefore excluded. Employers pay the tab for most attendees, so the paperwork required will vary, but you’ll have all week to complete it.

Poll respondents say the best way by far to get people into your HIMSS booth is to deploy friendly, alert reps (hint: reps who stare longingly into the eyes of their phones are neither).

New poll to your right or here, following up on the KLAS survey: Which of the following patient engagement technologies have you personally used in the past year? I probably should have excluded dentists since they are far better users of consumer-facing technology than their medical counterparts.

I’m looking for a few good companies that are interested in signing up for HIStalk webinar services and sponsorships. Startups get a first-year discount because Lorre decided that would be nice for the little guys. We always get more interest right before and after the HIMSS conference as companies are paying more attention to the comparative effectiveness of reaching an audience of actual decision-makers. Contact Lorre. 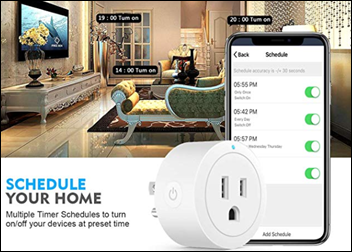 Geek gadget alert: I read that resetting your router occasionally will ensure good Internet speed. Mine isn’t in a handy location, so I thought about plugging it into a mechanical timer like you do for Christmas tree lights and having it power off early in the morning and then on again a minute later. I then ran across these smart plugs,  which allow you to control the plug over WiFi with a slick app, with Alexa or Google Home, and even IFTTT. I think it even has as one of its programmable elements sunset time, so that you might turn on a lamp at sunset and then turn it off at 11 p.m. A four-pack costs just $25, they were a snap to set up in just a few seconds, and they are working perfectly so far. The only caveat is that they work only on 2.4 GHz WiFi networks.

Listening: The Equatics, high school kids from Hampton, VA who recorded a single funk-soul album in 1972. I heard them on Hulu’s “High Fidelity,” which I’m enjoying a lot (Zoe Kravitz is excellent, at least while I’m waiting for Tony nominee Da’Vine Joy Randolph to steal every scene in which she appears.) The soundtrack is all deep cuts and oddities from obscure LPs like this one and the playlist is on Spotify.

The Defense Department acknowledges – after initial denials – that a problem with a common login system has prevented military members, retirees, veterans, and their families from logging in to the Tricare Online Patient Portal and to its MHS Genesis Cerner system for several days. The ID platform DS Logon is working from inside the DoD’s network, but not from outside computers. 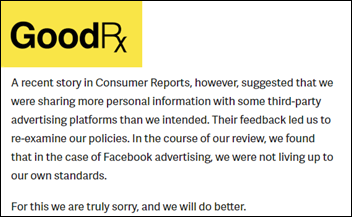 A Consumer Reports investigation finds that prescription discount coupon vendor GoodRx sends patient information to 20 online companies that include Google, Facebook, and a marketing firms. Most surprising is that consumers and doctors interviewed by the magazine somehow think that HIPAA protects medical information everywhere, missing the major point that it binds only covered entities and their business associates, not discount websites. GoodRx reacted to the unwanted publicity with an apology, the hiring of a data privacy VP, reduction in the information it shares with Facebook and Google, and new user options for opting out and deleting their data as required by California’s privacy laws. The company says it will make sure the third parties to which it sends patient data follow HIPAA standards, which I’m not quite sure I understand.

CNN resurfaces the two-year-old story in which a Facebook bug was found by health IT expert Fred Trotter as having exposed the membership lists of its closed, private groups – as was found with a breast cancer gene support group – to developers and marketers. Facebook changed its closed group settings, but denies that the existence of a privacy loophole even though it admitted that developers had access to membership lists, saying that users shouldn’t use its Groups product if they are worried about privacy. The Federal Trade Commission has not yet responded to the December 2018 complaint filed by Trotter and healthcare attorney David Harlow.

HHS will review the St. Louis Fire Department’s participation in the TV show “Live Rescue” following HIPAA-related privacy concerns about its depiction of accident victims in near-live broadcasts. The fire department accepted legally responsibility for any HIPAA violation in its deal with the TV show’s producers,  an agreement that pays the city nothing for its participation.

Vendors of AI-powered symptom checkers and chatbot struggle to update their algorithms with COVID-19 information. 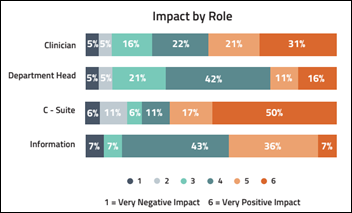 A small Reaction Data survey of health system clinicians and C-suite leaders finds that most respondents expect HHS’s proposed interoperability rules to have a positive impact. Epic users are more favorable to the ruling than those of any other EHR vendor. The rule’s biggest health system supporters are clinicians and executives, and while IT leaders were less enthusiastic, they don’t feel all that strongly about it either way. Respondents were pretty much equally split as to whether patients should control their own information versus hospitals and clinics doing it for them.

Healthcare in America: a man and his three-year-old daughter who underwent mandatory US government quarantine after returning from Wuhan, China find a pile of hospital, radiologist, and ambulance bills waiting when they finally got home. The government didn’t have a plan for who pays for being forced into quarantine in a non-government facility, and since the man has no health insurance since his China-based employer doesn’t offer US coverage and he’s lived in that country for years, he’s looking at a $4,000 expense so far. The biggest chunk of the bill, $2,600, was from a short ambulance ride provided by American Medical Response, which was sold to private equity operator KKR in 2017 for $2.4 billion in cash. He was coughing and his daughter was blinking excessively in a TV interview, which he would like to have checked out if he can qualify for Medicaid. 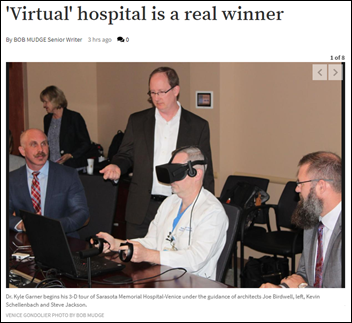 I had a double gotcha on this story in the Venice, FL paper. The first was that I thought it was about telehealth – it’s actually about architects for a new hospital trying out the design on employees using virtual reality. My second thought is that those cataract sunglasses that are ubiquitous among Florida’s senior citizens have gotten awfully large. 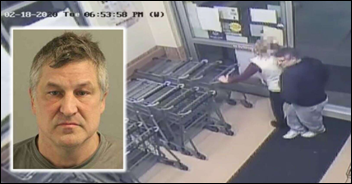 Paging Weird News Andy: Maryland police arrest a man who stabbed a woman with a syringe full of semen in a grocery store. Tom Stemen (!) told the woman when she confronted him, “It felt like a bee string, didn’t it?”