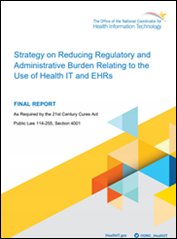 HHS and ONC publish “Strategy on Reducing Regulatory and Administrative Burdens Relating to the Use of Health IT and EHRs,” meeting the requirement of the 21st Century Cures Act that HHS address government-imposed burdens on EHR use.

HHS was looking at strategies that could be achieved in 3-5 years and that HHS could implement under its existing or expanded authority or as a influencer.

I noted these specific items, although it’s not clear how HHS and ONC see themselves being  involved beyond calling out the status quo as undesirable:

CMS Administration Seema Verma said in announcing the report, “The taxpayers made a massive investment in EHRs with the expectation that it would solve the many issues that plagued paper-bound health records. Unfortunately, as this report shows, in all too many cases, the cure has been worse than the disease. Twenty years into the 21st century, it’s unacceptable that the application of health IT still struggles to provide ready access to medical records,  access that might mean the difference between life and death. The report’s recommendations provide valuable guidance on how to minimize EHR burden as we seek to fulfill the promise of an interoperable health system.”

From No More Tangles: “Re: Atrium Health. It’s a bigger deal than the commenter says, pretty much a rip-and-replace. They are Cerner’s first and largest hosted customer and this was a big decision for them even beyond acquiring Wake Forest. They are almost entirely Cerner, with some miscellaneous Meditech and old McKesson. They were using Epic only for professional billing in a subset of their physician practices. Navicent also had an urgency to move and passed on Cerner for their long-term future and chose Epic.” Atrium Health released its 2019 financial report last week that showed a $284 million profit on $7.49 billion in operating revenue (not including that of its regional partners) and CEO compensation of $7.25 million.

We’re in that pre-HIMSS quiet period, where companies – wisely or not – hold their announcements for opening day, when they are likely to get lost among the others. It will therefore be light reading today.

HIStalk sponsors sent some cool write-ups for my HIMSS guide – descriptions of what their company does, what they will be demonstrating, fun giveaways and donations to charities, and in-booth events such as whiskey tastings, happy hours, podcasts, presentations, and Google Cloud’s “Build with a Googler.” I’ll make a downloadable PDF shortly.  I’ve done zero prep for the conference, but I’m starting this weekend by making a list of booths I want to visit from this list of 60 or so. You can text me during the conference at 615.433.5294.

Lorre wants to spice up our webinar calendar with new entries, so contact her and you’ll get a pre-HIMSS deal. Another sponsor thing I just remembered: fill out the form to be featured in my reader-requested Sponsor Spotlight. Hey, it’s free, so why wouldn’t you?

Most poll respondents have little faith in organizations keeping their health information private, but some trust medical practices and health systems.

New poll to your right or here: What would most entice you to interact with a HIMSS exhibitor that you don’t know much about?

Queen’s Health Systems (HI) notifies 2,900 patients that their information was exposed by an employee who emailed an attachment to the wrong address.

A health reporter for The Atlantic writes up “the Uber for BS” of corporate buzzwords, calling out “stakeholders,” deep dives,” “optics,” “growth hacking,” “value-add,” and “synergy. She quotes an author who says people use buzzwords for the same reason they wear ties or Ann Taylor clothes to the office – to tell the world they are working. An anthropologist takes a more cynical view, saying that people use buzzwords when they aren’t really doing anything. Stay tuned for the HISsies “most overused buzzword winner – will it be “artificial intelligence,” “social determinants of health,” “cloud,” or “disruption?” I’ll circle back shortly after I’ve leveraged consensus in preparation for moving the needle among thought leaders. 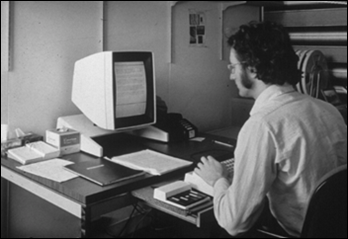 Larry Tesler, who invented such computer functions as cut-copy-paste and search-replace in the early GUI days at Xerox, is Control-X’ed at 74.