What would happen with the public discourse if Facebook came out in favor of the proposed [HHS interoperability] rule because it would allow them easier access to you and your family’s medical record? Facebook then adds a new Terms of Service all users mindlessly click through which gives them the rights to attempt to access your data? If you come down differently on the philosophical debate as to whether the government should act to protect its citizens’ privacy / whether the government should be a nanny state, that’s fine. Just be careful what you wish for. If the proposed rule goes through, and some app maker or advertising platform suffers a breach, then they will likely suffer trivial consequences at worst and your complete identity and medical data will be on the internet forever. (Elizabeth H. H. Holmes)

There isn’t any enforcement occurring around layoffs that target employees who are likely to be expensive, and the toolset provided by these [employee wellness] companies are built around identifying those employees. (Jim)

What are these employer-funded health tech companies going to look like after the next recession? Not a 2008 style recession, but a regular one. Employers are going to drop these expensive services faster than they drop break room snacks or drink tickets at the Christmas party. If the renewal contracts are a year or less or if the employer pays by usage, these companies are going to drop like flies. (What) 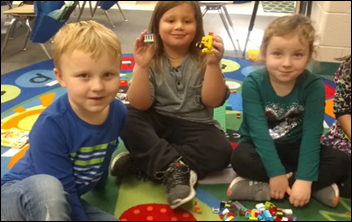 Readers funded the Donors Choose teacher grant request of Ms. W in Virginia, who asked for STEAM tools for her kindergarten class. She reports, “My students have loved centers this week, as they get to explore the new gifts! It has been so cool to see their little minds at work. They have made some really creative projects. They have used the straw builders and LEGOs to create patterns. They wrote about what they built with the magna tiles. They collaborated with their classmates to plan, create, and test their ideas with the STEAM kits. As a teacher, it was been a joy to watch them work, learn, and grow. Thank you again for providing us with this wonderful opportunity!” 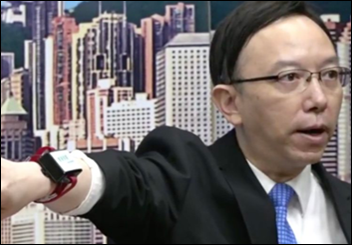 Hong Kong will use smartphone-connected tracking wristbands to quarantine people who have visited the Hubei province in China in their homes. Authorities will be alerted if  the wristband moves more than 100 feet from the smartphone during the two-week quarantine. Geofencing is also apparently being used, but not GPS, with the director of health saying, “These are people who have to be quarantined at home. The are not criminals, so we agree we have to respect their privacy.” 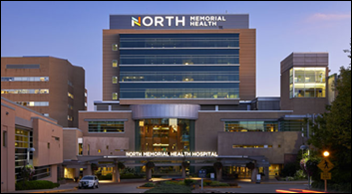 Police arrest a man who broke into the oxygen tank room of North Memorial Health Hospital (MN) and turned off the valves that provide oxygen to patients. The man, who was previously charged with unplugging computers and TVs in the same hospital,  said he was mad at the hospital. The hospital lauded its engineering team in a statement:

The North Memorial Health engineering team is continuously monitoring the hospital environment – from temperature to humidity to oxygen levels. If any of these systems move out of a predetermined acceptable range, they quickly act to identify the cause of the problem and fix it (and they are good at what they do!). The hospital oxygen system which was affected during this incident is a system with multiple redundancies (aka several backup systems). When our engineers noticed the oxygen system pressure moving below the desired range, they quickly identified the issue and corrected it. They did this so effectively and efficiently that none of the backup systems even needed to be activated. No patients were harmed due to this system disruption. 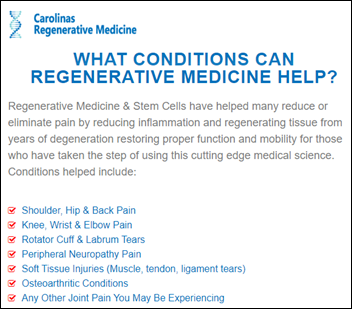 A North Carolina TV station takes a hidden camera into a local clinic’s stem cell treatment sales pitch to prospective patients who had been recruited by a mailed flyer,. The salesman rattled off a long list of conditions that he claimed stem cell treatments can cure, adding, “Don’t fret if you don’t see something on here that’s ailing you – we probably just ran out of room on that slide.” The station also told Carolinas Regenerative Medicine that it would be reporting that its medical director has been indicted on federal charges of distributing oxycodone, after which it removed his bio from its website. The medical claims remain, including a pitch for platelet-rich plasma treatments for erectile dysfunction. 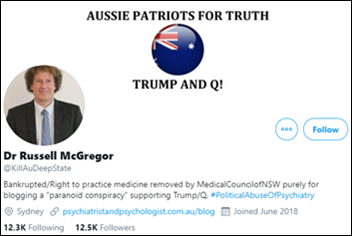 A psychiatrist in Australia loses his license after being found mentally unfit to see patients. The doctor claimed that President Trump ordered him to post Deep State conspiracy theories on his practice’s website, where he claimed the existence of a global Satanist pedophile ring and that 9/11 was faked. His conduct was reviewed after he complained to the medical board about his wife having an affair with another psychiatrist. When told that his license would be suspended pending improvement in his mental state, he called the council chair a “filthy dirty f&%$ left-wing slut” who, along with media reporting the story, is part of the conspiracy against him.